interesting watching this from north of the border

From my perspective this looks like a delusional individual taking the law into her own hands based on the authority provided to her by her imaginary being.

I wonder if she would be getting the same degree of tolerance if she were a Satanist instead of a Christian.

The courts should probably throw the book at her for this. She'll be lucky if they don't.

“She is a hypocrite,” Savage said. “This is a woman who's been divorced three times and married four times. ... Jesus Christ himself in Scripture condemns divorce, calls it adultery and forbids it.”

“Jesus Christ in Scripture says not one word about same-sex marriage,” he added.

Savage went on to note that Davis is setting herself up for a lucrative career as a conservative martyr.

“I think Kim Davis is waiting to cash in,” Savage said. “I predicted from the beginning that she would defy all the court orders, defy the Supreme Court. She would be ultimately be held in contempt of court, lose her job, perhaps go to prison for a short amount of time and then she will have written for her ghost-written books, she will go on the right-wing lecture circuit and she'll never have to do an honest day's work ever again in her life.” 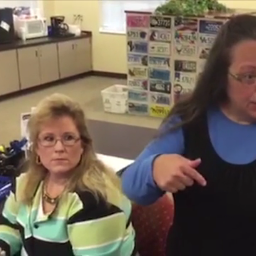 “I think Kim Davis is waiting to cash in,”

she will go on the right-wing lecture circuit and she'll never have to do an honest day's work ever again in her life.”

that's what I said on FB a while back

so what happens when lunch break is over in her office?
someone else refuses to issue licences?

If that happens, it'll be interesting to see what the ACLU does, considering as she would have a viable habeas corpus claim.


What's a habeas corpus claim? I've heard of that before but I don't know exactly what it means.
0 Replies
1
Reply Thu 3 Sep, 2015 12:48 pm
@rosborne979,
I think she could resign her elected position or refuse to run for re-election. Either would make the case moot.
1 Reply
1
Reply Thu 3 Sep, 2015 01:03 pm
@engineer,
This is a decent definition. Keep in mind that it is kind of complicated, and these days habeas is far more likely to be used when someone is in jail and looking to make a Federal claim of unlawful detention when their state remedies have been exhausted -

Latin for "that you have the body." In the US system, federal courts can use the writ of habeas corpus to determine if a state's detention of a prisoner is valid. A writ of habeas corpus is used to bring a prisoner or other detainee (e.g. institutionalized mental patient) before the court to determine if the person's imprisonment or detention is lawful. A habeas petition proceeds as a civil action against the State agent (usually a warden) who holds the defendant in custody. It can also be used to examine any extradition processes used, amount of bail, and the jurisdiction of the court.

The concept behind it is that we can't just jail people indefinitely in the United States. There has to be a real-live jury or judge-led trial judgment against her. You know, a regular old ruling.

In Craig v. Hecht (44 US Sup Ct. 103, 1923), it was ruled that the only way someone found in contempt (and thereby jailed) could get a writ of habeas corpus was when the court did not have proper jurisdiction. It's not likely that that would happen here.
http://www.jstor.org/stable/1111642?seq=1#page_scan_tab_contents

At least as of 1983, Craig was considered good law and was not overturned.
http://openjurist.org/702/f2d/380/martin-trigona-v-shiff

If I were her lawyer (and I'm glad I'm not), I would petition the US Supreme Court to consider whether Craig should be overturned.

And if I were on the US Supreme Court, I would vote to uphold Craig, as the intent behind that ruling was to prevent this precise situation, a person trying to weasel out of a compliance order, being given the opportunity to leave jail if they agreed to comply, and then not doing so. Habeas isn't intended to work like a 'Get Out of Jail Free' card.
1 Reply
2
Reply Thu 3 Sep, 2015 02:55 pm
@jespah,
I have no sympathy for this lady. She brought it on herself.

If she had really wanted to follow her own beliefs as she claims, she would have simply resigned when she could no longer do her job. Instead she willingly chose to impose her own religious beliefs on everyone else by using her position in public office to make a statement. That's pretty clearly a violation of the First Amendment even putting aside the contempt of court issue. And its hypocritical given that she's claiming her first amendment rights are violated while she does it.

Either she's a moron who doesn't realize that her job is not the same as her private life (and she's free to quit her job if the job description changes). Or she's a self-righteous manipulative moron who simply wants to force her religious view on everyone else.
1 Reply
1
Reply Thu 3 Sep, 2015 03:42 pm
@rosborne979,
The most sympathetic way she comes across (and I was looking for some angle to try to see the other side of it all) is as a raving, Bible-thumping lunatic who doesn't know any better.

But I suspect she does know better, at least a little bit, and is grandstanding to try to shove her beliefs down our collective throats.

A fully devout Muslim or Satanist clerk would be impeached by now. She's mainly being handled with kid gloves because, Christianity and because, Kentucky. But she's getting to be enough of an embarrassment that I imagine the governor's office will quietly and behind the scenes begin to lean heavily on her.

And I do hope people come out of this understanding that even small elections for County Clerks are kind of important, and if they don't want to see this kind of crap happen again, then maybe they should vote in said elections.
2 Replies
1
Reply Thu 3 Sep, 2015 07:32 pm
@jespah,
jespah wrote:

And I do hope people come out of this understanding that even small elections for County Clerks are kind of important, and if they don't want to see this kind of crap happen again, then maybe they should vote in said elections.

They don't care. They voted for her because her mom held the seat before her and they recognized the name.

But people forget news events quickly. All of this will probably be forgotten within a month.
0 Replies
1
Reply Thu 3 Sep, 2015 07:45 pm
When i was living in Ohio, i voted every November. In the odd numbered years, when there were no national offices on the ballot, voter turn out ran 15% to 20%. A lot of county officials and judges get elected by one out of five voters, or fewer.
0 Replies
2
Reply Thu 3 Sep, 2015 11:39 pm
@jespah,
I have absolutely no sympathy for her.

Let her resign if she feels she can not carry out her lawful duties because they conflict with her personal religious beliefs. That is her main option in this situation.

She should be impeached because she is a public official who is failing to uphold her oath of office.

It's a waste of taxpayers' money to keep her in jail--I'd rather see her fined, and then impeached, and then removed from her office.

I think this does smack of a deliberate, fund-raising, publicity stunt for, and by, Christian conservatives. As in--Christianity under attack, Christians being jailed for their beliefs, quick send money. I think it has all been carefully calculated.
0 Replies
1
Reply Fri 4 Sep, 2015 04:35 am
She took a job. Then the job changed to require actions which violate her personal moral beliefs. Nothing wrong with that and it doesn't imply a conspiracy. However, her best move at that point probably would have been to resign.

I cannot say to resign and campaign for her point of view, since court decisions are not influenced by votes. Presumably, even if a law eliminating gay marriage were passed by 100% of the electorate, it would have no effect because of the court decision. This would all be as it should be except for the fact that the Constitution nowhere mentions marriage, gay or otherwise. Judges often simply write words to rationalize decisions they make based on their personal wishes. Look at the Dred Scott decision. I believe that in the gay marriage Supreme Court case, justice Scalia's dissenting opinion said that the decision had nothing to do with the Constitution.
1 Reply
2
Reply Fri 4 Sep, 2015 08:44 am
things are a little different in that office now

Deputy Clerk Brian Mason was all business. He checked their licenses, asked them if they were related, took their $35 and, in about five minutes, handed them an envelope and said, "Congratulations."

nobody respects an oath breaker - Discussion by gungasnake
Is taking his picture legal? - Question by aquestion
"I want to be a lawyer!" -- Frequently Asked Questions - Discussion by joefromchicago
Guilty murderer Amanda Knox - Question by contrex
FOOD NAZI'S SUFFER STUNNING DEFEAT! - Discussion by hawkeye10
Hotelmanagement - Employee dates a guest - Question by lisali93
Question about going to court for a misdemeanor? - Question by Swamp Swagger
JPMorgan Chase Civil Settlement - Discussion by jcboy
Need a Legal Opinion - They Won't Let a Relative Visit From Europe - Discussion by Brandon9000
The Trial that JUST WON'T END - Question by michellesings
Copyright © 2023 MadLab, LLC :: Terms of Service :: Privacy Policy :: Page generated in 0.04 seconds on 01/29/2023 at 07:01:10
▲ ▼