Those Dark Spots on Pluto 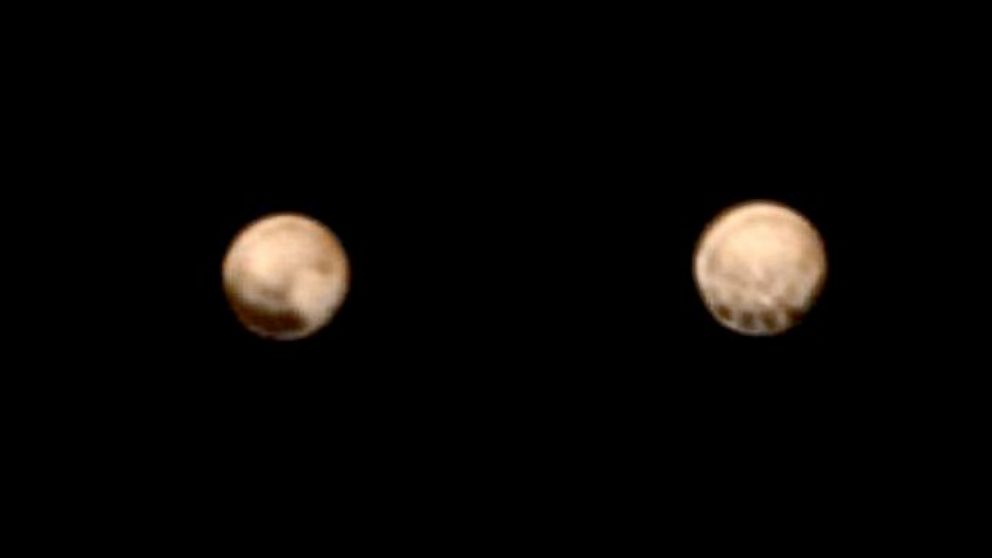 "It's a real puzzle -- we don't know what the spots are, and we can't wait to find out," Alan Stern, principal investigator for New Horizons, said in a statement.

The spacecraft needs to take a very calculated path past Pluto and its moons, to ensure its instruments point where they are supposed to on the 14th.

Had the thruster burn not been executed, the US space agency (Nasa) probe would have arrived 20 seconds late and 184km off from the point where mission controllers wanted it to be.

If something concerning is seen in the path such as icy debris, a further manoeuvre could still be implemented.

Shortly, New Horizons' Mission Operations Center, which is based at Johns Hopkins University, will upload the commands that will drive the observation sequence during the flyby.

In the meantime, the spacecraft continues to return pictures and other data on approach to Pluto, even though the dwarf is still currently only a very small feature in the distance.

Its latest detection is of frozen methane on the little planet's surface.

Earth-based telescopes first saw this back in the 1970s, but New Horizons can now confirm the hydrocarbon's presence.

Almost daily, new pictures from the probe's LORRI camera are uploaded on to a public website.

"We can see very large regional differences in brightness across the planet,” said principal investigator Alan Stern from the Southwest Research Institute.

"We see a polar cap. In fact, on Pluto's moon Charon, we see an anti-polar cap - a dark cap, a dark pole, which is very unusual and we don’t understand it.

"But we’re going to get a lot closer, and we're going to see a lot better.

"We’ll get spectroscopy, which will allow us to fingerprint whether the composition is different there. And soon we’ll be able to start making atmospheric studies [of Pluto] and do some of the other things we came to do."

On flyby day itself, no pictures will come back to Earth, because New Horizons will be so busy gathering data.

The first images are expected on Wednesday, 15 July.

"We’ll eventually get to a resolution of 80m per pixel with LORRI," explained Prof Stern.

"So, if you were to fly over a typical city here on Earth, at the same altitude and looked with LORRI, you could spot major parks, you could spot runways; you could spot a football stadium and see the field inside. Things like that; it's going to be pretty incredible resolution."

The travel time of a radio signal between New Horizons and Nasa's antenna network is about 4.5 hours.

"We’ll eventually get to a resolution of 80m per pixel with LORRI," explained Prof Stern.

Way back when, after a fly-by of Mars, some clown at NASA announced that there was no life on Mars. Rod Serling (remember Rod?) commented during the narration of the images that the focal point was three kilometer, which was enough room to hide three kilometer-long elephants.

Eighty meters is a pretty good focal point for this kind of thing. It's also enough room to hide four 20 meter elephants, and those would be some damned big elephants.

"The team is now working to return New Horizons to its original flight plan," NASA said in a statement about the anomaly.

"Due to the nine-hour, roundtrip communication delay that results from operating a spacecraft almost 3 billion miles (4.9 billion kilometers) from Earth, full recovery is expected to take from one to several days; New Horizons will be temporarily unable to collect science data during that time."

Such a long trip from our 8-bit view of Pluto. So excited for the @NASANewHorizons #PlutoFlyby July 14! pic.twitter.com/FjYZkxvRFi

The $700 million New Horizons mission is expected to make its closest approach with Pluto on July 14, taking the first up-close observations of the tiny planet as it moves along.

NASA scientists and the public have already gotten some amazing, never-before-seen images of Pluto and its largest moon Charon from New Horizons. The craft recently sent back a hypnotizing GIF of Charon orbiting Pluto, as the two bodies come into clear focus for the first time.

Researchers are also starting to get hints of the colors of materials on Pluto's and Charon's surfaces. The origin of the moon's dark pole is a mystery, and scientists are eager to gather more information about the extremely dark and extremely light patches seen on Pluto's surface.

New Horizons launched to space in 2006. It has taken about 9.5 years and more than 3 billion miles to travel to Pluto for this flyby.

After leaving Pluto and its system of five known moons behind, the craft could move on to other icy objects in the outer solar system if its mission is extended by NASA.
1 Reply
2
Reply Sun 5 Jul, 2015 01:05 pm
@edgarblythe,
Quote:

New Horizons launched to space in 2006. It has taken about 9.5 years and more than 3 billion miles to travel to Pluto for this flyby.


That is an amazing statement...when you stop and think about this mission.
In that time, the Federal gov't has done what with other projects, R&D and directions? I'd say this is one of the best bargains and pursuits for NASA. Gaining such knowledge and mastery of technology enhances us in the deep space exploration industry madding to high technology industries in general.

Can NASA fix New Horizons spacecraft just days before Pluto flyby?
NASA lost contact with New Horizons for about 1-1/2 hours on July 4. Its historic rendezvous with Pluto is July 14, giving engineers time to get the probe up and running.