Stop this issue, See if the article mentions anything about Clinton helping authorities.

Interviewed by The Conscious Resistance outside the courthouse after the settlement announcement, Edwards was asked about accusations that President Trump has been involved in the same things as Epstein.

“The only thing that I can say about President Trump is that he is the only person who, in 2009 when I served a lot of subpoenas on a lot of people, or at least gave notice to some pretty connected people, that I want to talk to them, [Trump] is the only person who picked up the phone and said, let’s just talk. I’ll give you as much time as you want. I’ll tell you what you need to know, ” Edwards recalled.

The non-prosecution agreement struck between Epstein and Acosta’s office was also concealed from the victims in the case. A Florida judge ruled in February 2019 that the team of Miami prosecutors led by Acosta broke the law when they hid the deal from the more than 30 underage victims who had allegedly been sexually abused by Epstein.

At the time, then-press secretary Sarah Huckabee Sanders told reporters that the administration was “looking into the matter” but did not speculate on what was in store for Acosta.

It seems Trump's vetting process didn't care about about justice for the victims at all.

It seems Trump's vetting process didn't care about about justice for the victims at all.

Let this serve as a reminder that the current republican body cannot be trusted with the "health" and welfare of this country...
0 Replies
3
Reply Mon 6 Jul, 2020 02:26 am
4 Months Until Election, Trump Worst-Polling Incumbent in Nearly 3 Decades
https://www.newsweek.com/november-election-trump-worst-polling-incumbent-1515199

Democrats did not have to make a mass fake news campaign against Trump. Hack into his emails and publish them online.

Or spend millions of Russian rubles or scare black people away from the polls...

Nope, all we had to do was sit back and watch Trump and the republicans make asses of themselves... Their true despicable selves were bound to come out in all their hideous glory, tweet by insidious tweet..
0 Replies
2
Reply Mon 6 Jul, 2020 11:35 am
Supreme Court rules 'faithless electors' can't go rogue at Electoral College
https://www.nbcnews.com/politics/supreme-court/supreme-court-rules-faithless-electors-can-t-go-rogue-electoral-n1231394

What, you mean Trump can't buy them this time?

This will make him popular in the military when they have to drag him out of office kicking and screaming. (cynical)

“He won’t wear a mask, but he has no problem with a white hood” ~ Lincoln Project

Trump is not a racist. The losers that founded the Lincoln Project have always hated Trump. They have no problem with lying. Besides that, every white man is a racist, right?
0 Replies
-1
Reply Mon 6 Jul, 2020 01:55 pm
@RABEL222,
RABEL222 wrote:

I hope your wrong. I would rather see him go to a federal prison for collusion with Putin and the Russian government.

Banning the Democratic Party in America will put an end to their abuse of the law to conduct witch hunts against innocent people.
1 Reply
-1
Reply Mon 6 Jul, 2020 01:56 pm
@MontereyJack,
montereyjack wrote:

When BLM racists try to murder police officers and white people, the three S's are the only way for the victims to save themselves.
0 Replies
-1
Reply Mon 6 Jul, 2020 01:58 pm
@Region Philbis,
Region Philbis wrote: 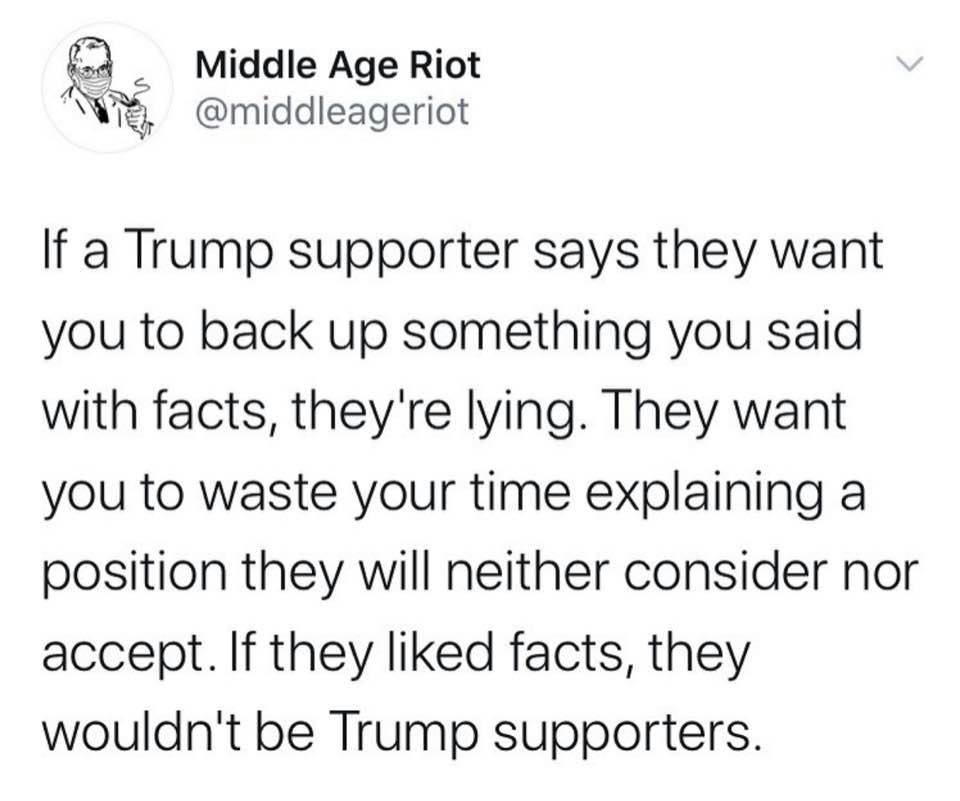 The reason why progressives can't back up their claims is because their claims are untrue.
0 Replies
-2
Reply Mon 6 Jul, 2020 01:59 pm
@snood,
snood wrote:

He is a tin-plated FRAUD. And people like coldjoint and Oralloy either can’t, or won’t see it.

I don't care if he is or he isn't. What matters is that he will prevent BLM goons from massacring police officers and white people.
0 Replies
-2
Reply Mon 6 Jul, 2020 02:00 pm
@TheCobbler,
TheCobbler wrote:

Lies, upon lies, upon lies. Fake news.
You are sick and bloated with lies and you speak as if you are clever and you are merely deluded.