Forums: Terrorism, France, Paris, Senseless Murder, Charlie Hebdo
Email this Topic • Print this Page
Reply Fri 9 Jan, 2015 03:58 pm
Deepest sympathies to the people in France who have suffered such terrible and senseless losses. Respect for the police and military of France who have dealt with these murderous devils.

Spoke to my brother tonight and he said that France is just stunned. The cartoonists were household names.

I also am not usually for mocking religion, though I don't partake in it now - I well remember being extremely reverent, or, trying to be, when I was religious.

I don't want to see France have split society (or any of the rest of us).

Thank you, everyone, for your support for the Frendh.

(Thanks for catching my typo, Contrex--aging is hell.)


Mixing up tous/tout/toutes is widely done by the French themselves... This event hit me very hard; I have been a lover of Charlie Hebdo since the 1990s and I have a pile of them, plus several Maurice et Patapon books by Charb, a worthy successor to people like e.g. James Gillray.
0 Replies
1
Reply Sat 10 Jan, 2015 05:04 am
Now i'm even more embarrassed. I was referring to having left out the preposition, and hadn't noticed the tout/tous error. Aging is, apparently, more hellish than i thought.
1 Reply
1
Reply Sat 10 Jan, 2015 06:02 am
@Setanta,
Setanta wrote:

Sick **** QueefiaMath just had to crash in on a tribute thread.


I really thought this was a free forum , mate!!!!

this thread should not be about languagemanship.

Thank you all for you support, and don't you worry about grammar one bit. 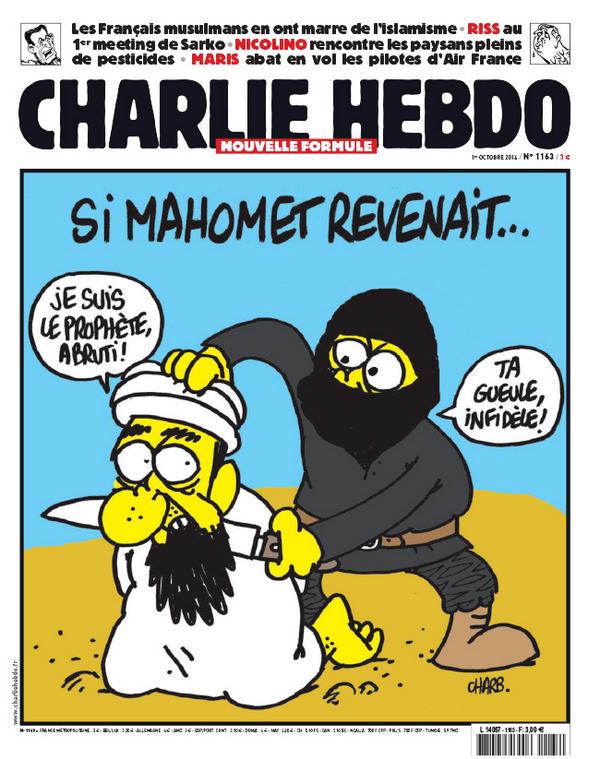 .. and don't you worry about grammar one bit.