Forums: Politics, Ronald Reagan
Email this Topic • Print this Page
1
Reply Fri 11 Jun, 2004 11:03 pm
I know all of you not familiar with California would like to know where Simi Valley is located. Here's a map. 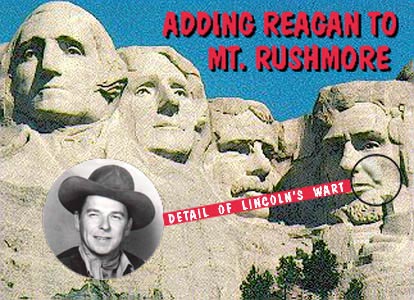 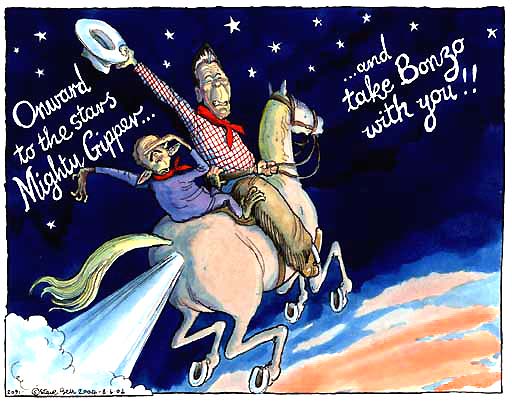 One of the reasons I left the republican party is what Reagan did to the mentally ill; threw them out of institutions onto the streets of America.

And in just a few short years, one of their own got elected president. Only in America... <sniff>

Just kidding. Thanks for reminding me about that one c.i., man that still pisses me off today.

One of the reasons I left the republican party is what Reagan did to the mentally ill; threw them out of institutions onto the streets of America.

Liberals are just as entitled to the American dream as anyone else...
0 Replies
1
Reply Mon 14 Jun, 2004 03:31 pm
BillW is right. The court order to deinistitutionalize the mentally ill was during the Carter Administration, I think in 1978. It came in response to good intentioned complaints about the abysmal conditions in mental institutions, but the solution had definite unintended negative results.
0 Replies
1
Reply Mon 14 Jun, 2004 03:52 pm
The following was Reagan's polity that decimated the programs for the mentally ill.
****************************
The Economy
In the aftermath of World War II, the United States experienced a period of dramatic economic growth. The industrial economies of Western Europe and Japan were by and large devastated by the war. As a result, American firms found little competition abroad in an expanding world market. The implementation of the Marshall Plan under President Truman provided American goods and services on credit to the war ravaged economies. During this period of economic hegemony, American companies were able to make concessions to labor in regard to wages and fringe benefits. Thus, the postwar political economy of the United States was characterized by relative peace between management and labor. With record corporate profits and rising standards of living, the United States government passed a series of liberal reforms throughout the period. Among these reforms was the passage of the Civil Rights Act, various social welfare programs, the construction of the interstate highway system, and the deinstitutionalization of the mentally ill.

During the late 1960s and early 1970s, the rebuilt economies of Europe and Japan began to give American companies stiff competition in the world marketplace. The growth experienced by American firms during the previous two decades began to slow, and profit margins were deemed to be too low (Barlett and Steele, 1996; Gruchy, 1985). In order to increase profits, many American firms attempted to become more competitive by trimming labor costs through layoffs and the relocation of factories (Bluestone, 1990; Bluestone and Harrison, 1982; Gruchy, 1985; Harrison and Bluestone, 1988; Moriarty, 1991; Perrucci et al, 1988; Sassen, 1991; Wallerstein, 1979). In addition, the reduction of corporate taxes was pursued with a renewed vigor (Barlett and Steele, 1994).

In order to reduce corporate taxes, it was necessary to reduce the size of the welfare state. This objective was carried out by the Reagan administration (Abramovitz, 1992). After taking office in 1981, the administration set out on a course to alter the (relatively) labor sensitive political economy to be more business friendly. Reagan appointed anti-union officials to the National Labor Relations Board, "implicitly [granting] employers permission to revive long shunned anti-union practices: decertifying unions, outsourcing production, and hiring permanent replacements for striking workers" (102). Reagan himself pursued such a policy when he fired eleven thousand striking air traffic controllers in 1981. Regulations designed to protect the environment, worker safety, and consumer rights were summarily decried as unnecessary government meddling in the marketplace (Abramovitz, 1992; Barlett and Steele, 1996). Programs designed to help the poor were also characterized as "big government," and the people who utilized such programs were often stigmatized as lazy or even criminal. With the help of both political parties, the administration drastically cut social welfare spending and the budgets of many regulatory agencies.

The new emphasis was on "supply side" economics, which essentially "blamed the nation's ills on 'big government' and called for lower taxes, reduced federal spending (military exempted), fewer government regulations, and more private sector initiatives" (Abramovitz, 1992, 101). Thus, to effect a change in the political economy, Reagan was able to win major concessions regarding social policy that continue today. By taking away the safety net, the working class was effectively neutralized: workers no longer had the freedom to strike against their employers or depend upon the social welfare system as a means of living until finding employment. Business was thus free to lower wages, benefits, and the length of contracts. The overall result was that the average income for the average American dropped even as the average number of hours at work increased (Barlett and Steele, 1996; Schor, 1992).

It should be understood that a realignment of the political economy did not require the complete dismantling of the welfare state -- although ideally this would be the case. Rather, the welfare state had to be rearranged in a way favorable to business. The concept of the new federalism would perform this function. The new federalism was an outgrowth of the debate over the appropriate role of the federal government relative to that of the states. While liberal Democrats argued that social welfare programs and governmental regulation fell within the purview of the federal government, many conservatives argued that such powers should be reserved for the individual states. Since the new environment supported conservative ideologues, the federal government was seen to have improperly assumed powers it had not been granted in the Constitution. The new federalism required that individual states create their own social policies tailored to their own particular needs. Thus, each state would have its own regulatory and social welfare system. As each state tried to pay for such programs, this would mean fifty different state taxation policies. This effectively pitted states against each other in competition for the most favorable business climate.

Among the policies in need of reform to suit the corporate agenda were those that affected the mentally ill. The funding cuts that altered these policies were part of the overall attempt to alter the political economy in a way that would be more profitable for business rather than a direct assault on the policies themselves. Within the scope of the cutbacks, interest groups operated both in opposition and in support of the changes, both within and outside the government.
0 Replies
1
Reply Mon 14 Jun, 2004 05:24 pm
I think if you go back and look at the budgets for those years, you'll be hard pressed to find out where anything got cut. Did some programs not receive the funding some requested? Yes. But I think you'll find all programs received substantially more in each budget of the Reagan administration.

He had a GOP controlled Senate for a couple of years I think, but mostly a Democrat controlled Congress. That he got any of his initiatives through is nothing short of impressive statesmanship as whatever happened had to be signed off by Democrat controlled committees and passed by a majority when the Democrats held that majority.
0 Replies
1
Reply Mon 14 Jun, 2004 06:14 pm
The only thing that got any increase under Reagan was national defense - as I remember.
0 Replies
1
Reply Tue 15 Jun, 2004 06:19 pm
And the beat goes on

"Ronald Reagan was clearly one of the greatest presidents of the 20th century," Carroll told The Star-Ledger of Newark.

Reagan died at his Los Angeles home June 5 at age 93 from pneumonia complicated by Alzheimer's disease.

If approved, it would be the first state highway in New Jersey to be named for an American president, according to Marc La Vorgna, a state Department of Transportation spokesman.

Route 15 begins in Dover in Morris County and passes through Rockaway and Jefferson townships. It then crosses into Sussex County before ending at Route 206 in Frankford Township.

The bill must be approved by the Legislature and Gov. James E. McGreevey, a Democrat. Spokesman Micah Rasmussen said the governor has not considered renaming the highway.

Similar efforts to recognize Reagan are underway in other states. The Illinois Tollway's board voted unanimously Monday to rename its portion of Interstate 88 the Ronald Reagan Memorial Tollway.

One of the New Jersey bill's sponsors has previously tried to honor Reagan. In 1998, Carroll drafted a resolution calling on the town of Clinton and the surrounding Clinton Township to be renamed in honor of Reagan
0 Replies
1
Reply Wed 16 Jun, 2004 08:25 am
<snicker> They tried to renamed Clinton, Reagan?
0 Replies
1
Reply Wed 16 Jun, 2004 08:33 am
cicerone imposter wrote:

The only thing that got any increase under Reagan was national defense - as I remember.


Q. Isn't there some sort of time limit on these things?
A. You're right, it seemed like about a year. But Reagan-Palooza has wound down, and they finally put the old man in the ground. Reluctantly. I mean, c'mon, JFK only got 4 days.

Q. Is it really over over, or is this just an intermission?
A. Well, if Karl Rove had his way, they'd still be dragging the body back and forth across the country in the bed of a Ford F-150 pickup, stopping at county fairs, right up till the election. He probably approached the widow with a contingency plan to dig up the carcass of conservatism in case Bush's prospects head South later this summer.

Q. Why did the networks go so crazy with non-stop footage?
A. This is going to sound silly, but they went crazy because they could. Eight years as President piled on top of eight years as governor added to 20 years in film and TV: they had footage up the wazoo.

Q. Still, don't you think it was kind of overdone?
A. You think so? I switched on the national news on Thursday and they cut from another unctuous paean to Reagan to a story on the Laci Peterson trial and I actually heard myself mutter out loud, "Thank God."

Q. Does Reagan get frequent flyer miles for all those cross-country coffin trips?
A. Probably not, but then the chances of him cashing them in are pretty slim anyway.

Q. Is this going to help Bush?
A. What a repugnant suggestion. To sully the death and mourning of a national legend by raising the ugly specter of partisan politics.

Q. Does that mean yes?
A. A 168-hour commercial on the ideals of conservatism? Yeah, you could say this is going to help Bush. You could also say wolverines make lousy crib toys.

Q. What long-term repercussions are expected?
A. Well, if this unfortunate demise and subsequent memorial buoys Bush, and Kerry falls behind in the polls, you know his people are going to have to consider taking out Clinton in October. If they don't need that big of a bounce, Carter.

Q. Any advice for the former Presidents?
A. I've heard Gstaad is nice in the fall.

Q. Do you really think they'll put Ronnie's face on the 10 dollar bill?
A. I'm thinking the ten thousand dollar bill would be much more appropriate.

Q. Wasn't it a mite cruel to honor a man who suffered through the throes of Alzheimer's for more than ten years with logos entitled "Remembering Ronald Reagan"?
A. I refuse to dignify that question with an answer.

Q. Okay, moving on. What was that whole "they've been planning this deal for over 10 years" crap?
A. Settle down, after you've fossilized into a beloved institution for a couple decades, you get the same free pass to arrange your burial for maximum press coverage.

Q. Does Nancy Reagan get to take a nap now?
A. Hopefully. As the week wore on, the poor lady looked more and more like a Pez Dispenser every day.

Q. What do you think of Kerry's decision to suspend his campaign during Reagan Death Week?
A. It might help in that the people who are aware he suspended his campaign are also now aware that he at one time had one -- and might again someday.

Will Durst is planning his burial already. It involves a drinking game and empty bottles.