Are there any peaceful muslim nations?

Forums: Religion, Islam, Spirituality And Religion, Muslims, War
Email this Topic • Print this Page
1
Reply Fri 24 Mar, 2017 09:18 pm
@vikorr,
Sorted with Perennial in PM. To save him posting (and to conclude this element of the thread)
0 Replies
1
Reply Fri 24 Mar, 2017 11:03 pm
@perennialloner,
I think the use of "by the same standard" has many flaws.
Here's one example: It's been shown that good looking people get better grades, are treated better, and earn more.

......With the invasion of India by Mahmud Ghazni about 1000 A.D., began the Muslim invasions into the Indian subcontinent and they lasted for several centuries. Nadir Shah made a mountain of the skulls of the Hindus he killed in Delhi alone. Babur raised towers of Hindu skulls at Khanua when he defeated Rana Sanga in 1527 and later he repeated the same horrors after capturing the fort of Chanderi. Akbar ordered a general massacre of 30,000 Rajputs after he captured Chithorgarh in 1568. The Bahamani Sultans had an annual agenda of killing a minimum of 100,000 Hindus every year.

The history of medieval India is full of such instances. The holocaust of the Hindus in India continued for 800 years, till the brutal regimes were effectively overpowered in a life and death struggle by the Sikhs in the Panjab and the Hindu Maratha armies in other parts of India in the late 1700’s.

We have elaborate literary evidence of the World’s biggest holocaust from existing historical contemporary eyewitness accounts. The historians and biographers of the invading armies and subsequent rulers of India have left quite detailed records of the atrocities they committed in their day-to-day encounters with India’s Hindus.

These contemporary records boasted about and glorified the crimes that were committed – and the genocide of tens of millions of Hindus, Sikhs, Buddhist and Jainist, mass rapes of women and the destruction of thousands of ancient Hindu / Buddhist temples and libraries have been well documented and provide solid proof of the World’s biggest holocaust........

Will Durant argued in his 1935 book “The Story of Civilisation: Our Oriental Heritage” (page 459):

“The Mohammedan conquest of India is probably the bloodiest story in history. The Islamic historians and scholars have recorded with great glee and pride the slaughters of Hindus, forced conversions, abduction of Hindu women and children to slave markets and the destruction of temples carried out by the warriors of Islam during 800 AD to 1700 AD. Millions of Hindus were converted to Islam by sword during this period.”

According to the Aftonbladet newspaper, the first man arrested is a 39-year-old of Uzbek origin and a supporter of the Islamic State (IS) group. The media outlet reported the man was injured and confessed to involvement in the horror attack...

A national police chief, Stefan Hector, said the police’s “working hypothesis is that this is a terror attack.”...

The attacks followed a Cairo church bombing in December...

Eleven people were killed in that attack, which the interior ministry said was caused by a suicide bomber who blew himself up....

1 Reply
2
Reply Sun 9 Apr, 2017 02:59 pm
@vikorr,
When my sister and I traveled to Cairo, we visited the Coptic area, and visited where Jesus supposedly hid from the Romans. They built a church around that area.
https://en.m.wikipedia.org/wiki/Saints_Sergius_and_Bacchus_Church_(Abu_Serga)
1 Reply
1
Reply Sun 9 Apr, 2017 03:06 pm
@cicerone imposter,
It's always interesting to visit buildings that have stood the test of time. The architecture alone is usually fascinating, and then the stories and history behind them adds to them.
1 Reply
2
Reply Sun 9 Apr, 2017 04:05 pm
Most ordinary Muslims are far braver than the islamophobic bigots who denounce all Islam. 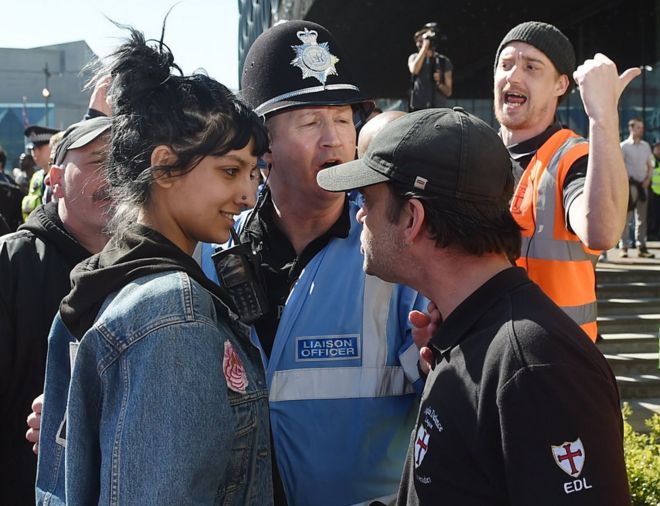 A viral photo of a woman smiling at an English Defence League (EDL) protester in Birmingham was snapped after she stepped in to defend a "fellow Brummie", she has told the BBC.

The image of Saffiyah Khan has been shared thousands of times since it was taken at Saturday's demonstration.

Ms Khan, from Birmingham, said she felt moved to intervene when she saw another woman surrounded by about 25 men.

"I don't like seeing people getting ganged up on in my town," she said.

Ms Khan, who said she was not part of an organised counter-protest, told the BBC she had been "quite surprised" when the photo was retweeted around the world.

She said she had initially been happy "to stay out of the way", but "stepped forward" when another woman shouted "Islamophobe" at members of the EDL who had gathered in Centenary Square.

"A group of 25 quite big-looking EDL lads, they surrounded her," she said.

"She was 360 surrounded... I stepped forward and identified myself as someone who supported her and contradicted them."

After that, Ms Khan said, protestors gathered around her instead, which led to the scene captured by a Press Association photographer.

Ms Khan, who was born in the UK and is half-Pakistani, half-Bosnian, said she "wasn't intimidated in the slightest".

She added: "He put his finger in my face. It was very aggressive. A police officer was there and the man took his finger out of my face. I wouldn't have responded violently."

The picture was shared by, among others, Piers Morgan, who called it "photo of the week", and Birmingham Labour MP Jess Phillips.

The BBC has been unable to reach the EDL for comment.

2 Replies
1
Reply Sun 9 Apr, 2017 04:16 pm
@vikorr,
Yes, structures made by man over the centuries is a fascinating pursuit. Not only the pyramids in Egypt, but the Great Wall of China and the Vatican. The Blue Mosque, the Eiffel Tower and the other structures by Eiffel in Europe. Westminster Abbey with so many famous people entombed there. Even the Roman wall in England that can be viewed from the museum window in London, and Hadrian's wall up north. Ephesus is also another Roman site worth a visit. The Roman Empire was huge.
1 Reply
2
Reply Sun 9 Apr, 2017 04:18 pm
@izzythepush,
Great photo. It takes a lot of guts to step in like that, and a very strong sense of self to smile in the face of such. Most people wouldn't have been able to do so.
0 Replies
2
Reply Sun 9 Apr, 2017 04:20 pm
@cicerone imposter,
I recently saw a documentary about the excavations going on under Rome. Absolutely amazing. Unfortunately most of it isn't open to the public.
1 Reply
1
Reply Sun 9 Apr, 2017 04:26 pm
@izzythepush,
The media gave a negative picture of Muslims, and Trump came along and exacerbated the problem.
I had a Muslim friend in Dar es Salam in Tanzania. When I posted a note on social media about him, his friend, also a doctor, sent me a note telling me that my friend Bashir passed away after his long battle with cancer. He asked if it would be okay if we can keep in touch. Of coarse; I would prefer contact with my many friends around the world.
0 Replies
1
Reply Sun 9 Apr, 2017 04:31 pm
@vikorr,
On the Roman excavation.
https://www.google.com/amp/www.bbc.co.uk/news/amp/36311156
It notes that the barracks were active during Hadrian's time.
The Hadrian's wall in England brings together so many of the sites I was able to visit during my travels.
0 Replies
2
Reply Fri 14 Apr, 2017 08:05 am
@gungasnake,
" Down with USA" doesn't mean "Down with American people" or things like that. Also this slogan mainly is used by Iranians (not by all Muslims) and comes from dark history of America's imperialism and intervention in their country.
On 1980, after the success of Iranian 1979 revolution, when US government saw itself unable to stop the revolution, they provoked Saddam Hussain to invade Iran. A war that resulted in hundreds of thousands of casualties.
Later, they invade Iraq and ousted and killed Saddam Hussain.. Once their full support was behind him and years later, when no longer he was serving their purposes, he became a terrorist...
I think it's better to say "Down with double standards" that result in bloodshed of innocent people.

3 Replies
2
Reply Fri 14 Apr, 2017 08:18 am
@sky123,
and one more thing...
At 22 of Bahman (February) millions of Iranians march in the streets and say " Down with USA". Go within them and introduce yourself as an American... I guess hundreds (and even thousands) of them will invite to their home for dinner and resting...

0 Replies
2
Reply Fri 14 Apr, 2017 08:28 am
@sky123,
And that's not even mentioning the CIA/MI5 coup that ousted a democratically elected government and installed the Shah in the first place.

Don't waste your time with Gungasnake, he is a fundamentalist Christian bigot who denies evolution and the Big Bang, believes Peruvians used to ride around on dinosaurs and that there are pyramids on Mars. He's a stranger to reason.
2 Replies
1
Reply Fri 14 Apr, 2017 10:37 am
@izzythepush,
Quote:

believes Peruvians used to ride around on dinosaurs

and comes from dark history of America's imperialism and intervention in their country.

In other words, our lawful self defense against Iranian crimes and aggression.
2 Replies

How can we be sure that all religions are wrong? - Discussion by reasoning logic
What if no religions are correct, but there still is a God? - Question by neologist
We are all like little children who often say: "Mom, Dad, leave me alone, I want to be on my own". - Question by Leaffan
Beyond tribalism; How well does your religious label serve you? - Discussion by MattDavis
Is religion responsible for the opposition to peace in the Israel-Palestine conflict? - Question by maxdancona
Concern for Religious Freedom or Preaching Political Messages? - Discussion by wandeljw
Are atheists being more illogical than agnostics? - Discussion by igm
Why believe in god? The theist perspective. - Discussion by msolga
Why People Seek Solace In Gods. - Question by mark noble
Catholic remarried couples should abstain from sex - Question by Tes yeux noirs
How can a good God allow suffering - Question by SawyerMentink
Copyright © 2021 MadLab, LLC :: Terms of Service :: Privacy Policy :: Page generated in 0.05 seconds on 12/08/2021 at 08:03:20
▲ ▼