Why are the American People punishing Obama?

Forums: Politics, Obama, Economy, Us Politics, Performance
Email this Topic • Print this Page
1
Reply Mon 20 Oct, 2014 11:11 am
@hawkeye10,
Please support why a $15 minimum wage would be disastrous?
0 Replies
0
Reply Mon 20 Oct, 2014 05:47 pm
Hawkeye: I agree with you that the $15/hr minimum wage idea is never going to go anywhere.
How would you feel about Congress adopting this in one piece of legislation:
In 2015 the Federal minimum wage would increase from $7.25 to $8.00;
In 2016 it would rise to $8.80 with a further increase
In 2017 to $9.70.
I think it safe to assume that the Repubs will control the House and Senate after the mid-term elections.
If both parties can agree to this, they can perhaps shake the perception that they are bunch of "do-nothings," and it gets this behind them as an issue in the 2016 elections.
1 Reply
1
Reply Mon 20 Oct, 2014 06:29 pm
@realjohnboy,
I am opposed to Congresses and Presidents committing future Congresses and presidents to actions that they were not willing to do on themselves, so I would oppose your timeline. 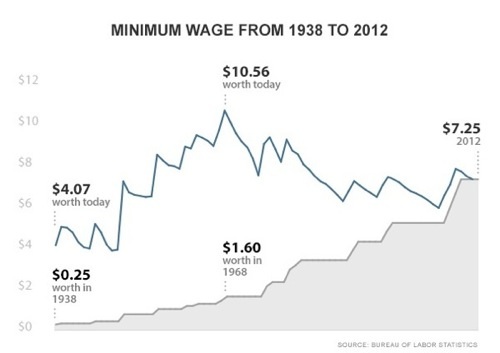 at first blush $9.70 seems to be in the right ballpark.

I would do it all now, and give states with a low cost of living an extra year to adjust, under the theory that the new higher min wage would cause the most destabilization in states with the lowest cost of living. If these states decide to stick with the rest of the nations timeline fine. 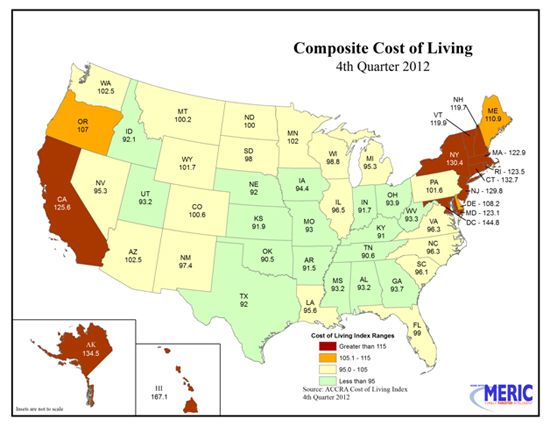 EDIT: these states with low cost of living tend to run R, which I see as a benefit to getting such a law passed.
1 Reply
1
Reply Mon 20 Oct, 2014 06:43 pm
@hawkeye10,
But y0ur idea that present congress and the president should not be able to pass laws that affects all future administrations and congress isn't the way our country's political system works.
2 Replies
0
Reply Mon 20 Oct, 2014 06:47 pm
@cicerone imposter,
That would be an excuse. A childish one.

"but it doesn't agree with old letters on a piece of paper!".

If they aren't doing their job - the system does not apply to them.

But y0ur idea that present congress and the president should not be able to pass laws that that impose conditions on future administrations and congress that they are not willing to impose on themselves isn't the way our country's political system works.

You don't even know how our own government operates! You're one ignorant American.
1 Reply
0
Reply Mon 20 Oct, 2014 06:54 pm
@cicerone imposter,
"it's how the political system works"

And how does it work again? Enslaving yourself to previously written words on a mangy piece of paper instead of creating new ideas, better ideas that can shape this world and this community as it should be sounds counter-intuitive.

What you should be saying is, "who cares about a system - it's the details of people's ideas that manage to stay up to speed with society's cliques which shatter ignorance, excuses and lies for the betterment of humanity that matter most!".

See, that's the words of someone who has a heart and a brain.

Enslaving yourself to previously written words on a mangy piece of paper instead of creating new ideas, better ideas that can shape this world and this community as it should be sounds counter-intuitive.

That's what's called "the law of the land." Where did you attend school?

In Russia? LOL
2 Replies
0
Reply Mon 20 Oct, 2014 06:58 pm
@cicerone imposter,
My point is, using a corrupt system as a means to argue someone's actions, is by far the epitome of idiocy and delinquency. It's just as bad as a mother watching her husband beat her child because "he's just angry, and I can't do anything about it except run, but I'd rather go through the pain than to live on the streets".

Life is about change.

Your excuse is everything but.

This entire society is built on double standards and old letters written on paper.

That makes you a sheep, now doesn't it?

What seems to be some positives about our economy after the Great Recession, Obama's performance rating is a higher negative score. Even after seeing job increases, and the stock market growing at a good pace.

What seems troubling to most is the fact that wages and salaries have remained stagnant, losing some 5% buying power since 2009, and the new jobs are paying less than before the Great Recession.

Many credit the Federal Reserve for our improving economy by keeping interest rates low.

Why do you think Obama gets such a bad rap when he saved our economy from the Great Recession which many economists believe would have gotten
our country into another Great Depression without his actions?


I think you provided a partial answer to you question in the second paragraph above. This has been the slowest recovery from a major recession we have seen in many decades. There is no evidence that "Obama saved us" from anything that wouldn't have quickly healed itself without major government action. The TARP program was put in action by his predecessor. IN his subsequent "stimulus" program, Obama merely launched a major set of "shovel ready" projects that weren't shovel ready at all. His stimulus turned out to be a giant boondoggle for already overinflated Federal and state bureaucracies that merely added to our debt and increased the dependency of the people on the government. The slow recovery and degradation of the middle class job market were largely the result of the enormous body of restrictive regulations the Administration put into effect through the Dodd Frank and Obamacare legislation and a host of business unfriendly regulations he imposed on the economy. Our idiot in chief now proposes to fix that by imposing a $15.hr minimum wage - one must be very stupid to believe that nonsense. The best thing one can say about the current administration is that we're only about 10% of the way towards Venezuela.

Obama gets a well-deserved bad rap from people who have finally come to understand that he knows and understands nothing except politics and interprets every issue through a lens that sees only political effects. I believe that after an already too-long parade of failure in Federal agency after agency and a series of lies and cover-ups from the White House, people are finally seeing our overhyped President for the empty suit, community organizer that he always was. He's never before had real responsibility for anything, and it shows more and more every day.

I think you provided a partial answer to you question in the second paragraph above. This has been the slowest recovery from a major recession we have seen in many decades.

There's a very simple answer; the US is the only economy that continues to grow. One country, no matter which one, can't grow within a world economy that's still struggling from the recession. Even the biggest economy in Europe, Germany's economy is slowing. China's growth has slowed down too, because world demand have slowed. The US can't do it alone. That's the reason the US dollar has been gaining strength; that creates a further handicap for the US, because products and services produced in the US becomes more expensive to others. Our biggest trading partners are growing much slower. That's Econ 101.

The good things in our economy now, the boom in natural gas production and petroleum recovery have all happened in spite of Obama's idiotic policies, not because of them. Indeed both would be moving much faster if Obama resumed granting permits for exploration on Federal lands and the development of pipelines needed to safely transport our new wealth of fossil fuels to where they are needed.
1 Reply
0
Reply Mon 20 Oct, 2014 09:14 pm
@georgeob1,
You're getting silly. When the world's economy suffers, most of the developed country's economy will suffer. When the middle class wages do not keep up with inflation, and the prices for our goods and services become more expensive to our trading partners, all economies suffer. Econ 101.

Germany has been the strongest economy in Europe. When their economy suffered, all of Europe felt the pain. That's cause and effect in its simplest form.
0 Replies