Forums: Art, Art Identification, British, Paintings, Portraits
Email this Topic • Print this Page
Reply Wed 8 Oct, 2014 07:23 pm
Hi there, I'm a volunteer researcher for a gallery in New Zealand, and we are currently trying to identify these paintings owned by a private collector. Any help would be much appreciated. There are very few markings on the back - some have a tag labelled 'Arthur Tooth Dealer in Works of Art. 2&5 Haymarket, Opposite Her Majesty's Theatre, London'. Unfortunately I'm not in LA to peruse the Arthur Tooth records, which are held at the Getty Archive. Otherwise, the only other marking is on the back of the Daniel Chauncy Beale work, and it states 'C Davy, Artists Colourman'.

They may not be by British artists but the subjects are definitely British.

Kinda hard to understand why your museum staff is having trouble with these. This is real art.

Unfortunately there is no record of artist with any of these works - we have had some success identifying the artist in one other painting but those listed above are still a mystery. We've had a chat to some experts in the field but New Zealand is a bit far away from anyone with particular specialist knowledge in the realm of these works.

I've tried the old reverse image search and haven't had any luck there either, so I thought I'd put a few images out there and see if anyone had any tips!
1 Reply
1
Reply Thu 9 Oct, 2014 06:40 am
@RiahKW,
Did you notice the frames on the bottom two are made by the same maker?

The frames on two and three are the same from another maker and look 2oth century.

Why was the frame cut out of the first? These weren't photographed at the same time?

0 Replies
2
Reply Thu 9 Oct, 2014 07:07 am
So far, all I've determined is that there are many, many Thomas Rokebys and Daniel Chauncy Beale ( the young lad) appears to have been elected as a Member of The Royal Institute on Monday November 6th, 1866....some 13 years after the portrait was completed.

From this (National Trust) link.... The National Trust might have more info for you, or at least point you in the right direction for a relevant expert.
1 Reply
2
Reply Thu 9 Oct, 2014 07:59 am
@Lordyaswas,
Regarding the third one down (Sir Stephen Langham) ......he appears to be the son of Lady Langham (above), and here is some more info....

Notebook of family events from the birth of Langham's father to 1771. The notes were started by Sir Stephen Langham, and continued by his widow, Lady (Mary) Langham, John Cater and other descendants. They include occasional references to royal and national events....."

I'm also guessing that the Beale lad is the last one in the line to have his portrait done.
Last trace of him I can find is of him being a barrister in London (Lincoln's Inn), and buying or, more likely, inheriting land in what would appear to be either Essenden or Suffolk or both.

Is your collector a descendant or connected to a descendant, do you think?
1 Reply
2
Reply Thu 9 Oct, 2014 08:11 am
@Lordyaswas,
Here is an interesting family tree you could possibly chase.....

If you can research where these people originated, where their family seats were, so to speak, I'm pretty certain that you will come up with a Grand House somewhere, possibly on the scale of something nearly as grand as TV's Downton.
Once you find where all this stuff was hung on walls, you can then find what happened to it all.
If it was sold at auction (a distinct possibility, with all the crippling inheritance taxes back in the mid 20th Century), then there will be an inventory of your paintings on record somewhere, recording the artist and price it raised.

That earlier National Trust link would be a great place to start, as they would have access to massive archives regarding all this sort of stuff, seeing as they (or their parent organisations that eventually became the NT) bought up many Grand Houses and contents during that period, and would have been very interested in any and all Grand Auctions that may have been taking place around the country.


Failing that......when is the next BBC Antiques Roadshow due to visit NZ

And her husband (COULD BE THE GRAND MANSION HERE)

He was the eldest son of Edward Langham of Guilsborough, Northamptonshire, who he succeeded in 1607. He was apprenticed to Sir Richard Napier, a Turkey merchant, for whom he worked in the Near East.

On his return he became a Turkey merchant himself, made a considerable fortune in the City of London and became a prominent member of the Levant and East India Companies. He built up an estate in Northamptonshire which included the purchase of the Cottesbrooke estate in 1635. He was an alderman and sheriff of London in 1642. He was committed to the Tower of London twice, with the Lord Mayor and other aldermen of London for refusing to publish an act for the abolition of royalty.[1]

Cottesbrooke Hall
If you think this one is Grand, I'll bet that the Rokesbys had one twice the size, or more..... 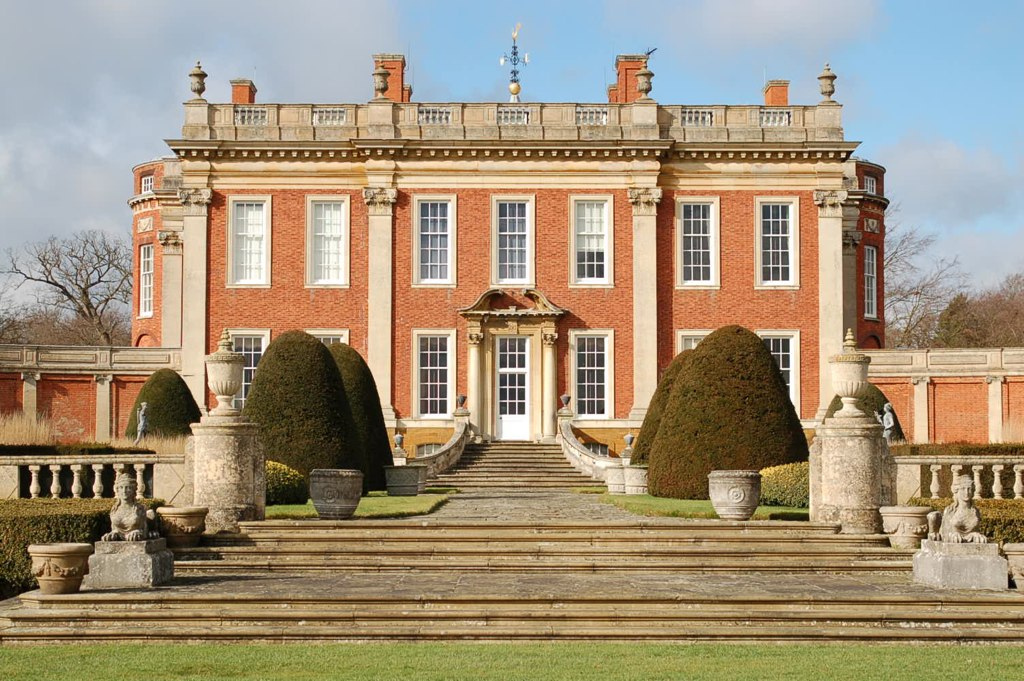 Keep getting references to Ebor, and think that it is an abbreviation of Eboracum (York).

Grays Inn keeps cropping up (family of barristers?) ,as does Armagh, Hotham (?) , Ackworth and Ackworth Park.
Most of this seems to be up in the North of England....there was even a Thomas de Rokeby who was given a castle (taken from the Percy family) for supporting the victorious side in the War of the Roses. "It is believed that no male descendants remained of Christopher, after the time of the civil wars, and that the represeiftation of the family then vested in the eldest male descendant of Thomas, the brother of Christopher, him who is mentioned as carrying about with him the arre in his face, made by the spear. The eldest grandson of this Thomas inherited very considerable estates from his father and mother, and was created a baronet in 1661. His son and heir apparent was a soldier, and died before him, leaving by a daughter of Coke of Holkham an only son, Sir William Rokeby, the second baronet, who died without male issue in 1678. The title was then enjoyed by his uncle, Sir WilloughbyRokeby; but he dying without issue in the July of the same year, the male issue of Sir William, the first baronet, became exhausted, and the title extinct....."

http://books.google.co.uk/books?id=AaxKAAAAcAAJ&pg=PA489&lpg=PA489&dq=rokeby+"ackworth+park"&source=bl&ots=afzLY-osDq&sig=gplmOvmbr98xKvYYOBd6ucTwewc&hl=en&sa=X&ei=m8A2VNu8L4izaZb3gcgC&ved=0CCsQ6AEwBQ
0 Replies
1
Reply Thu 9 Oct, 2014 11:53 am
I was going to suggest contacting the Getty - I know the place, but not as an employee (wanted to be, at one point more than twenty years ago). I was in on the building of the new Getty since my bro in law was the main building inspector and there were family days for the workers before it opened to the public. This is neither here nor there, re your query, except that I trust they are contactable. How much help they'd be, who to try to talk with, I couldn't guess.

Otherwise, the only other marking is on the back of the Daniel Chauncy Beale work, and it states 'C Davy, Artists Colourman'.

1841 directory shows 'Robert Davey' at 83 Newman St, Oxford Street, Artists Colourman. By 1852, it is 'Charles Davy' at the same address.

Artists' Colourman is a supplier of paints and pigments, not the artist himself; these folks often also dealt in other raw materials like canvas