Watermelon ToothPaste and the Issue Of Race

Forums: Politics, Race, Racism Racist, Tooth Paste, Watermelon
Email this Topic • Print this Page
3
Reply Sun 5 Oct, 2014 06:37 pm
@Miller,
Watermelon and fried chicken are foods that are used in poor black stereotypes. Without that background, the comic doesn't make any sense at all. It makes sense if the intruder in the bathtub comments on the "minty freshness" of the presidential toothpaste or something equally inoffensive, but commenting on the watermelon flavor is a clear racial comment. I can't see any other interpretation. Watermelon toothpaste just doesn't make sense unless it is a racial slam, then it makes perfect sense. That is the only way the puzzle piece fits.
2 Replies
2
Reply Sun 5 Oct, 2014 06:46 pm
as a white guy i have to admit, if someone used watermelon and fried chicken to define me i'd have no problem, both are delicious, the pictures that were posted in the thread have (for the most part) less to do with the watermelon and more to do with the caricature of the black people in the images

... commenting on the watermelon flavor is a clear racial comment.


The author of the post in the Boston Herald has stated that he used the idea about the "watermelon"flavor, because his children used watermelon toothpaste.

Nothing more and nothing less.

By the way, Obama is 1/2 white. He 's never been on a plantation, and neither has his wife. I don't think that many white folks consider watermelon slices and fried chicken to be racist symbols.

I think those days are long gone....Except for the PC crowd who never seem to give up.
1 Reply
-1
Reply Sun 5 Oct, 2014 10:03 pm
@revelette2,
Do you ever laugh?
0 Replies
-1
Reply Mon 6 Oct, 2014 04:51 am
@engineer,
Why don't you people worry more about the hateful racists instead of the humorous "racists". Last time I checked, racism is hateful, not humorous. Making a joke about someone's racial features does not make you "racist" - it makes you "offensive", but since when was "being offended" a right? Hell, these people complain about all the stupidest **** anyways, they have no room to play moral high.
0 Replies
2
Reply Mon 6 Oct, 2014 05:13 am
@Miller,
Miller wrote:

By the way, Obama is 1/2 white. He 's never been on a plantation, and neither has his wife. I don't think that many white folks consider watermelon slices and fried chicken to be racist symbols.


An earlier post showed a number of photos of black people eating watermelon that are clearly trying to be racist. The ones of Obama are trying to be as offensive as possible, tying the President to the old stereotype. You can claim ignorance if you wish, but having lived in the South my entire life, I can tell you using a trumped up picture of a black politician with a big grin holding a big piece of watermelon, maybe with afro type hair is a typical racial ploy. Do you think the placement of the watermelon is coincidental in these pictures? 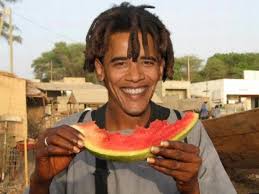 In a world where apparently threatening people to eternal damnation isn't remotely as bad as joking about someone's racial features, even though we make fun of everything, including ourselves. Racism is pure hatred. Making jokes is not the art of hatred. So why aren't people hell bent (pun intended) on the religious that threaten people's eternal life-hood like they are towards racism? Maybe it's because not everything is at is appears and people just like to jump into the boiling cauldron? People didn't care about burning the witch - people didn't care about people being threatened to eternal hell. Yet people care about this? Of all things?

You know what my brain thinks? I think deep down in people, they have this rooted anger that consumes them. They like to watch things burn, when it doesn't affect them, so when someone gets angry, they get mad - when they themselves get angry, suddenly the rules don't apply to them. People are despicable.

Give me a break.

Wise men, great men and comedians have a sense of humor.

It is only applied to one race. How is that not "racist"? Any pictures edited with President Bush showing run down shacks in the background, corn rows in his hair and a big slice of watermelon in front of him? Bush is a Southerner after all, Obama is not. If it was just "offensive", how come no one decided to offend Bush the same way? You can find hundreds of edited photos with the President with fried chicken, watermelon or both. This is a common racist move where I'm from and it's well known enough that I would figure a cartoonist for a major paper would know that.
2 Replies
2
Reply Mon 6 Oct, 2014 06:04 am
@engineer,
Mayor resigns over watermelon email.

Some history of the "coon" stereotype that discusses chicken and watermelon.
http://www.authentichistory.com/diversity/african/3-coon/5-chickwatermelon/
0 Replies
-1
Reply Mon 6 Oct, 2014 06:04 am
@engineer,
Stereotypes exist because they aren't inaccurate in "most cases". People are making jokes out of people's predictable features. When I hear a joke about someone's racial features, I laugh. Why? My brain never realized that it's true, they all seem to be acquainted with X Y and Z. I laugh at any joke about people's predictable features, whether it be any race, any occupation or any place. The thing about jokes is that they contain truth and irony - a joke can't be funny if it does not contain irony.

The Coon Obsession with Chicken & Watermelon

Although the coon caricature can be identified by his appearance alone, creators of pop culture imagery often amplified the negative reaction to the coon by depicting him engaging in one or more disreputable behaviors. As discussed in the History of the Coon section, the coon is often portrayed as a lazy, easily frightened, inarticulate, good-for-nothing buffoon. One of the most prevalent methods of achieving this effect was to depict the coon as obsessed with stealing and eating chicken and watermelon. Of all the stereotypes of African Americans, this is the one that modern youth have the most trouble understanding. "It's just food," they say. "What's wrong with watermelon?" The answer is, that there is nothing wrong with chicken or watermelon. What is troubling is the way in which these foods have been used to portray Black Americans as less than human for the purpose of justifying systematic discrimination.

Those pictures aren't "racist". You're using this world incorrectly which is dishonest of you. I really like your posts, but right now, you're really off the deep end. Again, there's not a single hateful person in the entire world who has a sense of humor towards what they hate. Hitler had a sense of humor towards some people, that he liked, but when it came to everything else, well Hitler was a different man, now wasn't he?

When I see coon, which derives from raccoon, I say "hey, at least they have a cute creature as a name, what the hell is a cracker, and how is cracker the best example of white?"

It's saying things like this that gives life to us. Having a sense of humor instead of always hating, is the secret to restoring life back to normal from this dreadful world full of idiots, serious people, pride and authoritative hypocrisy.