GREENPEACE ACTIVIST CALLS FOR CLIMATE CHANGE ‘DENIERS’ TO BE BEHEADED

A climate change advocate, believed to be a Greenpeace activist and Guardian contributor, has called for the beheading of so-called “climate change deniers”, arguing the world would be a better place without them. The comments are merely the latest in a long history of warmists advocating the killing of people who question global warming dogma.

On January 21st, in it’s ‘Climate Consensus – the 97%’ section, the Guardian published an article entitled “Matt Ridley wants to gamble the Earth’s future because he won’t learn from the past”, which was illustrated with a fake, but nonetheless rather gruesome image of a severed head.

The article drew hundreds of comments, including one from ‘Bluecloud’ on the day the article was posted, reading “Should that not be Ridley’s severed head in the photo?”

Further down he added “We would actually solve a great deal of the world’s problems by chopping off everyone’s heads.

“Why are you deniers so touchy? Mere calls for a beheading evolve [sic] such a strong response in you people.

“Ask yourself a simple question: Would the world be a better place without Matt Ridley?

“Need I answer that question?”

The comment has since been removed by moderators, allowing ‘Bluecloud’ to attempt to deny that he had called for violence. On Sunday morning he commented “Oh dear, it didn’t take much for the denial industry to start claiming environmentalists are out to chop off people’s heads.

“It’s clear that when they have no argument to make, they stoop to misquoting deleted posts”

Others also tried to deflect blame, with commentor ‘ianhassall’ writing “Bluecloud’s moderated comment is causing quite a stir, isn’t it.

“If warmists can’t get their point across with the settled science I’ve got no doubt they’d resort to the sort of violence he’s suggesting.”

To which Bluecloud replied: “And what violence would that be? Making false claims is easy in the absence of evidence.”

Unfortunately for Bluecloud, the evidence is easy to come by on Twitter. Climateologist Richard Tol has tweeted a screenshot of his original comment in full: 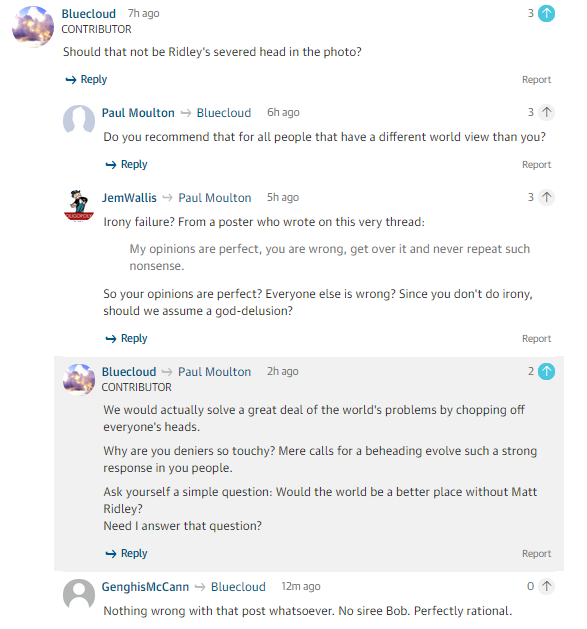 Maybe ask Isis, in the a studio near you!!!

Global-warming is not fake, the temperature of the Earth has increased faster than it has in the history of life on Earth. How is this possible? Also, look at Venus. It's armosphere has compounds in it's atmosphere that we are releasing into Earth's atmosphere here.

And you know this how???
1 Reply
1
Reply Wed 28 Jan, 2015 10:37 pm
@Quehoniaomath,
Scientific facts, something you know nothing about.
1 Reply
1
Reply Thu 29 Jan, 2015 12:21 am
The warming stopped around 1997. It went flat for about ten or eleven years and then turned downwards, and went over a cliff last winter and appears to be going further over the same cliff now.

Everybody is entitled to his own opinion, nobody is entitled to their own facts..
0 Replies
1
Reply Thu 29 Jan, 2015 12:21 am
http://www.forbes.com/sites/peterferrara/2013/11/12/the-coming-revelation-of-the-global-warming-fraud-resembles-the-obamacare-lie/
0 Replies
1
Reply Thu 29 Jan, 2015 05:15 am
That's right, only one set of facts, no matter what idiot opinion one finds at Forbes Magazine. From the National Oceanic and Atmospheric Administration:

This marks the third time in the 21st century a new record high annual temperature has been set or tied and also marks the 38th consecutive year (since 1977) that the annual temperature has been above the long-term average. To date, including 2014, 9 of the 10 warmest years on record have occured during the 21st century. 1998 currently ranks as the fourth warmest year on record.

This is the first time since 1990 the high temperature record was broken in the absence of El Niño conditions at any time during the year in the central and eastern equatorial Pacific Ocean, as indicated by NOAA's CPC Oceanic Niño Index. This phenomenon generally tends to increase global temperatures around the globe, yet conditions remained neutral in this region during the entire year and the globe reached record warmth despite this.

Six months of 2014 (May, June, August, September, October, and December) were record warm, while April was second warmest, January, March, and July were fourth warmest for their respective months, and November was seventh warmest.

This is the first time since 1990 the high temperature record was broken in the absence of El Niño conditions at any time during the year in the central and eastern equatorial Pacific Ocean, as indicated by NOAA's CPC Oceanic Niño Index. This phenomenon generally tends to increase global temperatures around the globe, yet conditions remained neutral in this region during the entire year and the globe reached record warmth despite this.

El Ninos are warmer waters in the sea depths working their way to the surface, i.e. heat already in the system. They give global temperatures a little kick in the ass whenever they occur, every few years. The 1997-8 el Nino was the strongest ever recorded, and for several years that peiod held the record for highest temp as a result. 2005 and 2010 beat 1997 for highest temp with weaker el Ninos, and now2014 beat all three of them with no el Nino at all. Which kind of shows that the denialists' claim that temps have been flat since 98 (or dropped as snaKKKe is claiming sppuriously) is untrue. As can also be seen from the rising temp line in the IPCC's newly released Summary for Policymakers. Or NOAA's rising temp line.
0 Replies
1
Reply Thu 29 Jan, 2015 10:49 am
Exactly what I said!!

LOL, an illustration of how to l et sond something ridiculous sonds very good!
Just put in the word "scientific"

You are very funny indeed and this is just an example of circular reasoning, and ending with an Ad Hominem.

"I know, because I know"

How more stupid are these sentencec going to be, mate?

I think that is easily shown by the coincidence of the steep rise in global warming starting at the same time as the Industrial Revolution gathered (and used) steam.

http://www.newscientist.com/data/images/ns/cms/dn23247/dn23247-1_1200.jpg
1 Reply
1
Reply Fri 30 Jan, 2015 04:41 pm
@parados,
The degree of tilt is the same but the axis through the N Pole and S Pole, tilts from the North being closer to the sun to the South being closer to the Sun and back over a one year period, which is what sets the dates of the 4 solstices.
1 Reply
1
Reply Fri 30 Jan, 2015 05:13 pm
If WW-II didn't bring about this great man-made ecological disaster, it's not gonna happen. In fact if memory serves, it was a bit warmer during the depression when much economic activity ceased, than it was during and after the war.
0 Replies
1
Reply Fri 30 Jan, 2015 07:27 pm
@jft2,
First of all, you're ignoring the cycles of warming and cooling which have been on-going for many thousands of years, and which have been just recently identified. Prior to the so-called "industrial revolution," people still relied on fire as their source of heat, for cooking and for industrial processes such as ore smelting and metallurgy. Just because it wasn't called "industrial" doesn't mean that it wasn't industrial.

You really need to educate yourself more before you shoot your mouth off like that.
1 Reply