The Trinity (a discussion)

where did Smiley go?

oh hey, well, long story short, lost my eyesight, makes reading a little tougher, just starting to get the hang of alexa and text to speech apps, so here I am, in the background, lurking, who knows, I might just start to post again soon.

hope you guys are all well, and life treats you kindly
1 Reply
2
Reply Sun 27 Jun, 2021 08:36 am
@Smileyrius,
Welcome back Smiley, but so sorry to hear of your sight troubles.
Good to hear that the tools available now make it still possible to communicate.

But I believe in the Trinity nonetheless. Also, this part will blow up your head.
https://www.christianity.com/wiki/jesus-christ/jesus-and-satan-referred-to-as-the-morning-star.html
Jesus and Satan are really the same person.

Just say "schizophrenia" and go along with it.
1 Reply
-2
Reply Sat 22 Jan, 2022 11:31 pm
@bulmabriefs144,
As Moses lifted up the bronze 'IMAGE' of a serpent on a pole in the wilderness, in order that all those who were dying because of the serpents venom coursing through their veins, only had to turn to the "IMAGE" that had been lifted up, to be saved.

In the same Manner (I repeat, In the same manner) Jesus, the earthly 'IMAGE' of the 'SON OF MAN' had to be lifted up on a pole, in order that all those who are dying because of the venom of the old serpent, only had to turn to his perfected 'IMAGE' that had been lifted up, in order to be saved.
1 Reply
-2
Reply Sun 23 Jan, 2022 03:38 am
@The Anointed,
"You shall not make for yourself a graven IMAGE."

Btw, my Bible simply says "As Moses lifted up the serpent, so the Son of Man shall be lifted up."
(Get a better Bible)
Jesus is not intended as an image, but as a treatment for the poison of sin. 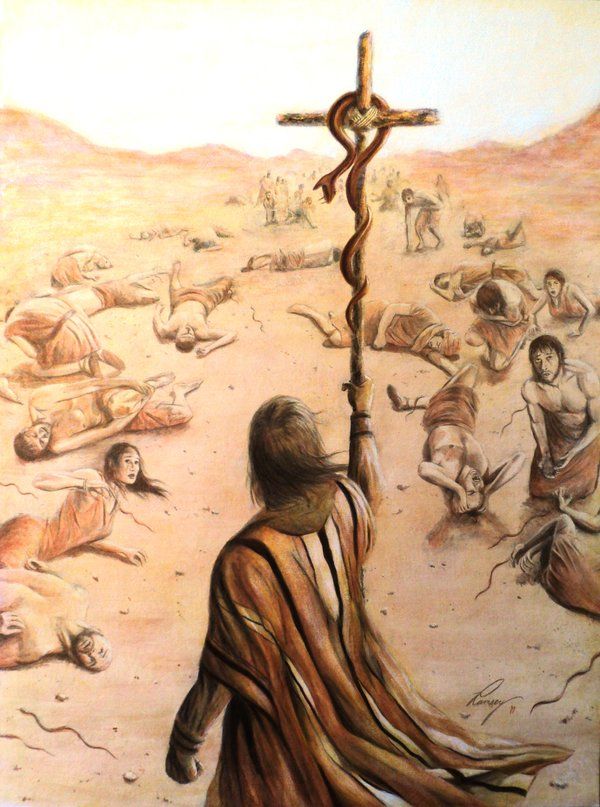 Likewise, Jesus is raised up, by having him hang on a tree.

Peter calls the cross a "tree", to draw parallel to a Jewish curse against hanging from a tree. That is, Jesus was raised up above us to be a visible reminder, that someone bore the curse of our sins. We are not to make him an image (seriously man, toss that Bible of yours), but rather worship God as God.
1 Reply
-1
Reply Sun 23 Jan, 2022 05:47 am
@bulmabriefs144,
Quote:

Jesus is not intended as an image, but as a treatment for the poison of sin.

Was it a real live snake that Moses lifted up upon a pole, or was it a bronze image of a snake?

Just as it wasn't the image of Jesus, it was actually Jesus.

You seem to be hung up on idolatry, so let's review.

I don't understand why a bronze snake was chosen vs a real snake, not when Moses smashed the ten commandments over a golden calf. But the image of a bronze snake is actually not the genuine article but a representation (drawing or painting) of a snake on a pole. Moses did not have them look at a painting.
Neither should you look at Christ Crucified by Diego Valazquez, and base your faith around it. Jesus is male because that's how he is depicted?

Jesus spoke those words (lowercase and plural) to a group of people that were so fixated on an idol that they forgot the power of God. That's right, even that which we see as holy, like the Temple or the Torah, can become an idol if you focus on image. The Jews thought their Temple was ordained by God and that nothing would be able to shatter or destroy it. But the real Temple fell in 70 AD, after a series of strange miracles.
The doors swung open at night, the lights went out, the cloth used for offering no longer turned white but stayed red, and lot continuously fell on "scapegoat." There was also the curtain being torn apart from the top down, meaning the holiest room couldn't be used anymore.
1 Reply
-2
Reply Mon 24 Jan, 2022 06:53 pm
@bulmabriefs144,
Quote:

It was a bronze snake.

Indeed, it was an 'IMAGE' of a snake made out of bronze

Indeed, it was not an image of a bronze snake, it was an 'IMAGE' of a real snake made out of bronze.

Just as it wasn't the image of Jesus, it was actually Jesus.

Indeed, it was actually the man Jesus, the earthly "IMAGE" of ‘THE SON OF MAN’ who had filled Jesus with his spirit on the day that he was baptised, and who was lifted up upon a pole, in the same manner and for the same purpose that Moses had lifted up the ‘IMAGE of the serpent which was made out of bronze, in order that all who were dying from the venom of the serpent, only had to turn to the ‘IMAGE’ that had been lifted up in order to be saved.

It was “THE SON OF MAN” the ‘MOST HIGH’ in the creation, who mentally descended from his high point in time and was accepted by Abraham as his God, and it was the God of Abraham, who said to Moses in Deuteronomy 18: 18-19; “I will send them a prophet like you from among their own people; I will put MY WORDS in his mouth, and he shall speak to them all that I command, and whosoever will not heed MY WORDS, which he shall speak in MY NAME, I will surely punish, etc.”

Peter revealed that prophet to be the man Jesus, when he said in Acts 3: 22; “For Moses said, ‘The Lord your God will send you a prophet, just as he sent me, and he will be one of your own people. You are to obey everything that he tells you to do. Anyone who does not obey that prophet shall be separated from God's people and destroyed.’

It was the Lord who spoke his ‘WORDS’ through the mouth of his servant Jesus, who in John 2: 19; said; “Destroy this temple and in three days I will raise it up.”

So, who raised that Body-temple? Jesus himself, or the Lord God our saviour who filled Jesus with his spirit on the day he was baptised.

Acts 5: 30; The God of our fathers raised up Jesus, whom you slew and hanged on a tree.

Acts 13: 30; But God raised him from the dead: and he was seen many days of them which came up with him from Galilee, etc.

1st Corinthians 6: 14; And God has both raised up the Lord, and will also raise up us by his own power.

2nd Corinthians 1: 9; But we had the sentence of death in ourselves, that we should not trust in ourselves, but in God which raiseth the dead.

2nd Corinthians 4: 14; knowing that he who raised the Lord Jesus will raise us also with Jesus and bring us with you into his presence.

Acts 17: 31; For He (The Lord God our saviour) has fixed a day in which he shall judge the whole world with justice by means of a MAN he has CHOSEN. He has given proof of this to everyone by raising that MAN from death.

It was the God of Abraham, Isaac and Jacob, [WHO I AM] who said through the mouth his obedient servant Jesus, who spoke in ‘HIS NAME;’ “Destroy this Temple and in three days I will raise it up.”

And it was the God of Abraham (The Son of Man) who said through the mouth of Jesus. “No one can come to me unless the Father who sent me draws him to me; and I will raise him to life on the last day.”

Acts 3: 13; “The God of Abraham, Isaac, and Jacob, the God of our ancestors, has given divine glory to his Servant Jesus, etc.

It was a bronze snake.

Indeed, it was an 'IMAGE' of a snake made out of bronze

The image of things are NOT the thing itself.

Please, please, GET A NEW BIBLE.

Word. Capital and singular. Jesus is the Word of God.

Jesus was the man through whom the Lord God our saviour spoke “HIS WORDS”.

Jesus spoke not one word on his own authority, but only that which he was commanded to say by the Lord who had filled him with “HIS SPIRIT__HIS WORDS.”

It was the Lord, speaking through the mouth of his obedient servant ‘Jesus’, in John 6: who said that to have life we must feed on his body, many of the followers thought that was disgusting and abandoned Jesus. But the Lord was not telling them that they must eat the flesh of the man Jesus, but that they must feed on ‘HIS SPIRIT___HIS WORDS’. Then the Lord went on to say through his servant Jesus; John 6, verse 63; “It is the spirit that gives life, the flesh is of no use at all, the WORDS that I have spoken to you are spirit and life.

Who was the God of Abraham referring to, when he said to Moses; “I will send them a prophet like you from among their own people; I will put MY WORDS in his mouth, and he shall speak to them all that I command, and whosoever will not heed MY WORDS, which he shall speak in MY NAME, I will punish, etc.”

His “WORDS” were the spirit with which Jesus was filled on the Day he was baptised.

The image of things are NOT the thing itself.

Just as the bronze 'IMAGE' of the snake, was not the snake itself.

A theologian's answers shouldn't be trusted.
Why not listen to Jesus?


Why not stop supposing that there is a god from whom one has to have a "savior" to "save" you from its petty vengeance?
1 Reply

How can we be sure that all religions are wrong? - Discussion by reasoning logic
What if no religions are correct, but there still is a God? - Question by neologist
We are all like little children who often say: "Mom, Dad, leave me alone, I want to be on my own". - Question by Leaffan
Beyond tribalism; How well does your religious label serve you? - Discussion by MattDavis
Is religion responsible for the opposition to peace in the Israel-Palestine conflict? - Question by maxdancona
Concern for Religious Freedom or Preaching Political Messages? - Discussion by wandeljw
Why believe in god? The theist perspective. - Discussion by msolga
Why People Seek Solace In Gods. - Question by mark noble
Catholic remarried couples should abstain from sex - Question by Tes yeux noirs
How can a good God allow suffering - Question by SawyerMentink
Religion and Fear - Discussion by TomTomBinks
Copyright © 2022 MadLab, LLC :: Terms of Service :: Privacy Policy :: Page generated in 0.05 seconds on 12/03/2022 at 04:17:55
▲ ▼