Forums: Pancakes, Buckwheat, Pancake Art, Various Grains, Found Art
Email this Topic • Print this Page
Reply Sun 8 Dec, 2013 09:10 pm
I was going to make it a thread about using buckwheat in cooking, since that was my present concern. But recently buckwheat packagings are taken as sans gluten or not, so that is a whole other consideration, worthwhile. Complicating matters, I first learned buckwheat in a plant class and real life in my area, a long time ago, and that, Eriogonum fascifulatum, is not what you get in bags in stores (that is different, used in baking a long time). I've no idea if you can work with Eriogonum in baking. It probably has smog on it and much else, but there might be a history.

I've used buckwheat (the store kind) somewhat. My sack of buckwheat has been growing older as I use a tad in biscuits, or what.

So, I looked up recipes and found some, and am playing with them. In my playing, I've made peculiar pancakes.

But you don't need buckwheat to make peculiar pancakes, certainly not. It depends on how you dribble.

This is a pancake art thread.


Oh, I'll post the recipe, a mix from two bloggers, on how to make, in my view, buckwheat art. Later.

I had two of the pancakes, toasted, with a film of salty butter and dribbles of honey, for breakfast. Terrific. I think I'm only going to make buckwheat pancakes from now on, really good. I'll vary the fruit - thinking blueberries.
I'm going to try to make them larger, since those would be easier to get out of the toaster.

I'd read about buckwheat crepes and berries, but thought pancakes would be easier, thus the start of this.
I got the recipe by the combined efforts of two bloggers -

this is the first one I saw -
http://marymaryculinary.blogspot.com/2010/03/blackberry-buckwheat-pancakes-or.html 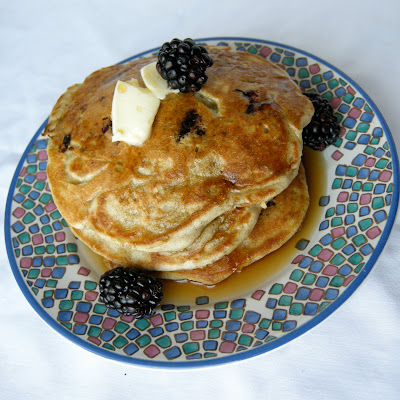 and she referenced this person -
http://awhiskandaspoon.com/2010/02/11/winter-buckwheat-pancakes/ 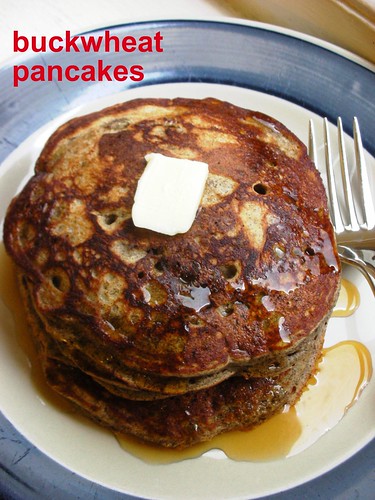 I sort of combined them. I added berries that had been whiling away time in my freezer, thawed/drained. I used buttermilk, not yogurt. I used only 1 tbs of honey, and that was just right for me.

The recipe by Whisk....com, with my changes, came out sort of gloopy sticky but I went with it. When I made the pancakes, using a combo of butter and mixed mediterranean oil (costco) in the pan, I plopped down what looked like a half balloon on a spoon onto the pan. No bubbles happened, as in ordinary pancakes, but heat did, and the balloons spread out.

Since there were these berries in the whole thing, and the balloon effect, shapes weren't all perfect circles, thus the thread concept - found art.


As I said, I liked the pancakes this morning, rich density, sharp berries, bit of salty butter, and the taste of honey. I froze the rest in packets of two.
0 Replies