Forums: Spirituality And Religion, Religion, Intelligence, Atheism, Studies
Email this Topic • Print this Page
Reply Fri 15 Nov, 2013 02:00 am
In America Rochester's university has been made scientific studies and analysis led by Professor Miron Zuckerman, which claims that religious people are less intelligent than non-believers. Journal of Personality and Social Psychology Review published a summary for this scientific study. When I researched this study, so on my mind arose many thoughts that prove this scientific study as the provocation of atheism in which they show their contempt to the certain group of the people. On my writing, I also bring out some thoughts about the article of Knoxnews.

Some atheists say Christianity is "evil" which doesn't sound like a very intelligent statement to me..

Some atheists say Christianity is "evil" which doesn't sound like a very intelligent statement to me..Smile
I mean,try as I might I can't see much evil in this-
"Love one another, feed the hungry, house the homeless, clothe the destitute, tend the sick, visit the prisoners, look after the poor"- Jesus of Nazareth (Mark 12:30, John 13:34, Matt 25: 37-40)

Well, one doesn't need to be a christian to be compassionate and do those things.

But the father of the character cited is supposed to have said:

'Vengeance is Mine, and retribution, In due time their foot will slip; For the day of their calamity is near.

Nah, if people deserve to have their asses busted it serves 'em right..

And don't rile his dad either-
"How much more severely do you think a man deserves to be punished who has trampled the Son of God under foot,....it is a dreadful thing to fall into the hands of the living God" (Heb 10:29-31)

PS- Timur i see you're another "no profile" merchant afraid to say what your beliefs are, cluck-cluck-cluck..
1 Reply
4
Reply Fri 15 Nov, 2013 05:51 pm
@Romeo Fabulini,
As far as I know there were no written records from any actual eye witnesses of Jesus. And the only written record begins over 300 years after he supposedly lived. The actual evidence that he ever existed is very weak. And it's absolutely clear that all of the miracles attributed to him are borrowed from other mythologies which predate that era by centuries.

So we know for certain that non of the miracles happened (besides the fact that they're preposterous), and we don't even know if a man fitting his description really existed, and even if he did exist, there's no way he would have looked like the northern european "white guy" you've been selecting for your images.

2 Replies
1
Reply Fri 15 Nov, 2013 05:55 pm
@rosborne979,
In the early days of The National Lampoon they did a comic strip series about Jeebus, and all the Jews around him were blond and blue-eyed--he was the only one who looked like a Jew.

Really, Roswell, you don't think people ant to imagine this, do you? 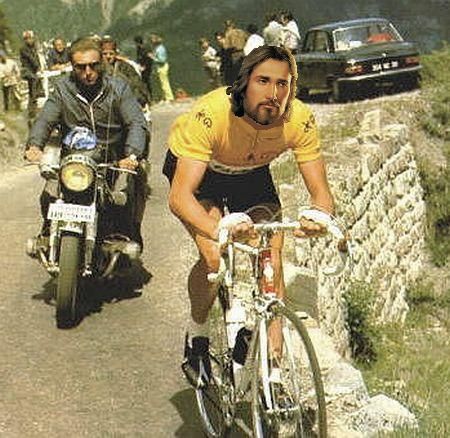 0 Replies
1
Reply Fri 15 Nov, 2013 07:04 pm
@PetriFB,
Well which scientific studies get to the root of the question to get the answer of why and how then see if you are convinced simple as that the you can start a discussion about this when you have enough info

2 Replies
2
Reply Sat 16 Nov, 2013 02:44 am
@Romeo Fabulini,
if this were a bell curve, you'd be a rim job...
0 Replies
2
Reply Thu 21 Nov, 2013 04:15 am
@PetriFB,
Well, it would make sense that atheists are on average smarter than religious people. The word average is important. There are very intelligent Christians like Francis Collins, the head of the human genome project. He's probably smarter than all of the atheists put together on here (me included, so don't be offended.) But, it does make sense that on average they would be more intelligent, because they're less likely to accept something on blind faith. Most of us, here in the US, grow up going to church being told Jesus is lord... & they believe it, because they trust their parents & authority figures, plus it's repeatedly drilled in their heads. It's takes a certain degree of intelligence to question it, & say "wait a minute, this story doesn't add up." It takes logic. Someone with a 60 IQ would be more inclined to believe in God & not question it. They would be less likely to notice the flaws & contradictions. Someone with a 160 IQ would notice them immediately. However, it is important to remember these are averages. There are stupid atheists and genius Christians. Newton was a fanatical Biblical literalists. He spent a lot of time trying to figure out a bible code. I have heard that a majority of scientists are atheists today. That does make sense, because the Christian mythology is just too ludicrous to actually believe literally (In my opinion).
1 Reply
2
Reply Thu 21 Nov, 2013 04:20 am
@Romeo Fabulini,
It sounds like that street preacher might be more mentally ill than stupid. Or he may be both, but generally the street preachers tend to be mentally unstable.
0 Replies
1
Reply Thu 21 Nov, 2013 04:30 am
@PetriFB,
When you research a study, you want to ascertain the validity of the study (not just inject your opinion of the researchers.) That is done by researching how studies are done correctly & incorrectly. Read up on statistics. You want to look at the sample size, were they chosen at random, how did they measure intelligence... The author of the study's intentions or purpose for doing the study is really irrelevant to the results. You want to make sure the study was done correctly, which you didn't appear to do. I'm really sort of disappointed with the responses to this post. Instead of reading the study or discussing it, everyone just sort of threw out the usual cliched attacks on Christianity. They were all correct, but I feel like everywhere I go, Atheists just repeat the same arguments against Christianity, just like the Christians repeat the same arguments in favor of it. Maybe, I'm a little jaded or something.
1 Reply