Forums: Electrical, Light, Electrical Wiring, Switches, Overhead Light
Email this Topic • Print this Page
Reply Mon 15 Jul, 2013 08:09 am
So I just purchased a property and I am having issues with the kitchen light, it doesn't turn on, and I am going to try my best to describe the problem. One of my coworkers came over and he pulled out a wire tester to see if there was power running to where you screw the bulb in. Sure enough, there is power to it and all the wires are live. Then we tested each of the two switches and there is power there as well, and for some reason the lights won't turn on (and yes I changed the bulb to a new one). The weird thing is is that there is still power running to it, even when the switch is turned off. I am hoping with my description someone can offer some insight. I need this to work!
Type: Question • Score: 6 • Views: 3,867 • Replies: 22
No top replies
1
Reply Mon 15 Jul, 2013 08:16 am
@dsen31,
Let see the switch could be bad and the reading of voltage at the socket is cause by the switch having a little leakage of current through it at all times.

A meter will draw a mill amp or less of current so that might be why you are getting a voltage reading at the socket but the leakage is not in the many amps range needed to light a bulb.

Take note he is seeing voltage on the sockets at all times so once more that sound like a bad switch to me that is allowing a small current to flow at all times.
0 Replies
1
Reply Mon 15 Jul, 2013 10:07 am
@dsen31,
31, Bill is quite right. Another possibility is capacitive coupling: One of the two wires, probably neutral, is broken but at some distance from the outlet so that there's enough capacitive coupling between it and ground to yield a substantial reading on a voltmeter, esp one of "vacuum-tube" or "emitter-follower" circuitry not imposing a substantial load
1 Reply
1
Reply Mon 15 Jul, 2013 10:44 am
@dalehileman,
Quote:

However you are right that a high input meter such as a meter with a FET input stage would show such coupling.

I will however stand with my suggestion of looking at the switch as a first stage in troubleshooting the problem.

PS I can still remember receiving for a birthday present on my 12 or 13 birthday a wonderful vacuum tube VOM from my parents.

When I took my amateur radio operators license in 1964 the tech questions were on tube theory.

When I took my FCC first class license exam in the early 1980s there was a lot of tube theory still on it.

Remember high freq "light house tubes" for example as that was one of the questions on the test I still can recall.

As long as we're letting our blue hair down, is this the meeting of tube-tapper's anonymous?

I recall bringing iffy tubes over to Ligetts/Rexall drug store and testing tubes on their free tube tester ... oh..somewhere around 1964 (I was newborn, of course). When I took my amateur radio operators license in 1964 the tech questions were on tube theory.
1 Reply
1
Reply Mon 15 Jul, 2013 11:14 am
@Ragman,
I wonder how the postings had gotten out of order on this thread that is a first time I saw that happening.

Maybe a tube had gotten weak in one of Robert servers........ 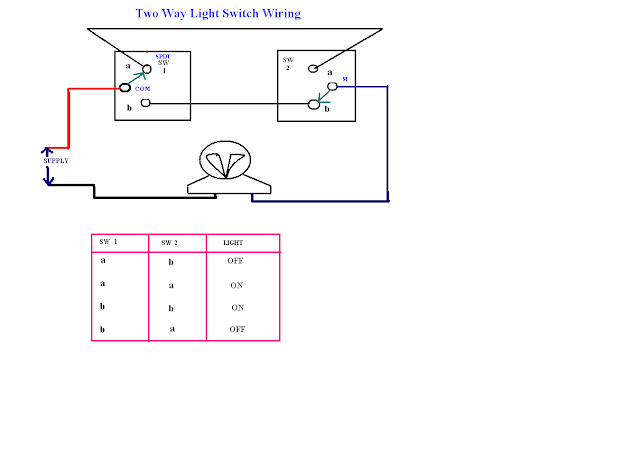 As Dale and Bill had mentioned, there are many reasons for you to get a false indication of power to the lamp at all times. Without knowing what was used as a "wire tester" and the skill of the operator, it is hard to comment on.

One other reason to get an indication of power all the time is that the line (hot) wire could be connected to the light and the switching done on the neutral side. I have seen this in some older houses.

Since the most common cause of the problem is a switch, I would test them first with an ohmmeter being sure to kill the power to the circuit first. Check that each switch is capable of opening (high resistance) and closing (less than 1 ohm) the connection between the common to A and common to B terminals of the switch.

One other possibility if the light has never worked since you got the property... the previous owner may have tried to replace a switch and wired it incorrectly. Use the above diagram to see how it should be wired.
1 Reply
1
Reply Mon 15 Jul, 2013 11:58 am
@dsen31,
I'm really surprised by your problem. You have 120vac at the fixture of an incandescent light but you can't get it to work? If it was a fluorescent fixture, I'd blame the starter on the fixture but an incandescent fixture is the simplest circuit imaginable. My suggesting is to buy a light socket adapter for $3. (You could probably return it when you are done.) Plug it in and check the voltage again at the outlet. If you still have power, plug something into the outlet and try to draw a load. If that works, sell the house, it is haunted. If it doesn't draw current even though you have a voltage signal, you might have a short to ground somewhere on the downstream side of the wall switches. Use your voltmeter to check the resistance on the downstream of the wall switch with no light bulb installed.
0 Replies
1
Reply Mon 15 Jul, 2013 12:03 pm
@dsen31,
I suspect you're not getting good electrical contact when you screw the bulb in.

Either the contacts are corroded, or something is preventing the bulb from being screwed all the way in.

And did you test your new bulb in a known-good socket both before and after trying the non-working socket?

Lord you are dating your self …..

……. such as a meter with a FET input stage would show such coupling.


Indeed Bill you're a step ahead of me there, where I was thinking of emitter follower…….

I will however stand with my suggestion of looking at the switch……...


The breaker too. I've been flummoxed by the one appearing to be ON when it really isn't

Ah yes I do remember, it was a funny looking affair
0 Replies
1
Reply Tue 16 Jul, 2013 01:58 pm
A good start as mentioned is to check the neautral connections to make sure they are done correctly. It seems to be the most likely problem considering you have power at the socket.

If you indeed to have a 3-way setup for the light, i would also make sure it wired correctly as that would explain why you have power at the socket at all times.

So to sum up, check neutral connections and 3-way switch connection if present.
1 Reply