777 Crashes on Landing in San Francisco

'A pop' and then 'a large, brief fireball' 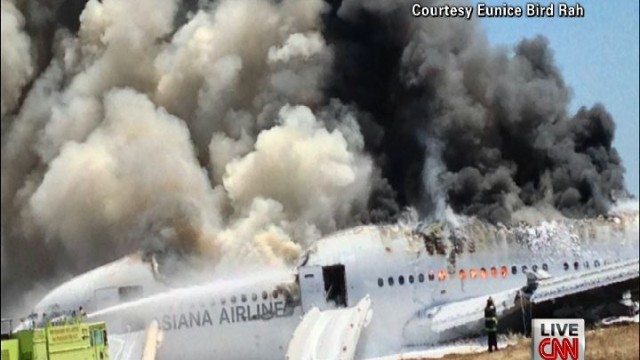 
(CNN) -- A Boeing 777 bound from South Korea crashed Saturday upon landing at San Francisco International Airport,
sending up a huge fireball and spinning before finally coming to a stop -- having lost its tail and, eventually, much
of its charred roof.

The U.S. Coast Guard has transported one person to Stanford Hospital, said Corrine Gaines of the military branch.
She did not provide additional information on the patient's status. In brief remarks to reporters around 2 p.m. (5 p.m. ET),
airport spokesman Doug Yakel did not offer any details on the conditions of the plane's passengers.

Anthony Castorani, who witnessed the flight land from a nearby hotel, said he saw the plane touch the ground then
noticed a larger plume of white smoke.

"You heard a pop and you immediately saw a large, brief fireball that came from underneath the aircraft," he told CNN. 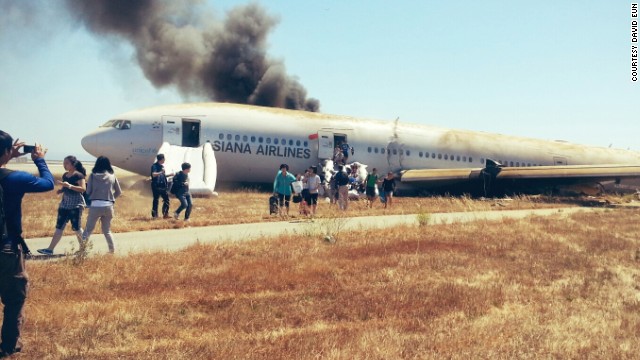 David Eun was on Asiana Airlines Flight 214 when it crashed at San Francisco International Airport on Saturday,
July 6. Along with this image posted to Path.com, David wrote, "I just crash landed at SFO. Tail ripped off.
Most everyone seems fine. I'm ok. Surreal..."
1 Reply
1
Reply Sat 6 Jul, 2013 04:07 pm
Quote:

-- The U.S. Coast Guard has transported one person linked to Saturday's plane crash at San Francisco
International Airport to Stanford Hospital, said Corrine Gaines of the Coast Guard. She did not provide
additional information on the patient's status.

-- There are no signs of terrorism related to the crash, a national security official told CNN.

I know the airport well.

(CNN) -- Two people died and dozens more were unaccounted for after a Boeing 777 from South Korea
crashed Saturday upon landing at San Francisco's airport, sending up a huge fireball, shedding its tail
and spinning before screeching to a stop.

Asiana Airlines Flight 214 left Seoul's Incheon International Airport earlier Saturday, according to
FlightAware, a website that offers tracking services for private and commercial air traffic. An airline
spokesman in Seoul told CNN that 291 passengers and 16 staff members were aboard.

"Upwards of approximately 60 (are) unaccounted for," the chief said.

Authorities warned that the numbers of dead, injured and unaccounted for at San Francisco International
Airport could change significantly in the coming hours. 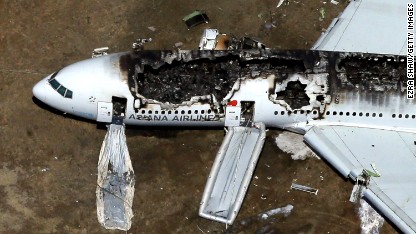 the cockpit appears to be intact, so authorities should have the black box in their possession by now...
1 Reply
2
Reply Sat 6 Jul, 2013 07:37 pm
@Region Philbis,
with all the smoke I saw on the news clip, Im amazed that anyone survived at all.

The New York Times
July 6, 2013
2 Die and Many Are Hurt as Plane Crashes in San Francisco

By NORIMITSU ONISHI and RAVI SOMAIYA

Smoke billowed out of holes in the fuselage of the Boeing 777 on Saturday afternoon as firefighters rushed to douse the wreckage and passengers scrambled to safety down inflated escape chutes. The plane‚Äôs tail, landing gear and one of its engines were ripped off.

‚ÄúIt hit with its tail, spun down the runway, and bounced,‚Äù said one witness, Stefanie Turner, 32. Despite incredible damage to the plane, left dismembered and scarred, with large chunks of its body burned away, many of the 307 aboard were able to walk away on their own.

Forty-nine passengers were initially taken to area hospitals, said Dale Carnes, assistant deputy chief of the San Francisco Fire Department. An additional 132 were later taken to hospitals, he said, and 123 were uninjured. The whereabouts of one person were unknown.

‚ÄúWe observed multiple numbers of people coming down the chutes and walking to their safety,‚Äù said Joanne Hayes-White, the fire chief. At least five people were listed in critical condition at hospitals. Officials said they had searched the wreckage and found no bodies.

One passenger, a South Korean teenager wearing a yellow T-shirt and plaid shorts, said that the plane ‚Äúwent up and down, and then it hit the ground.‚Äù

‚ÄúThe top collapsed on people, so there were many injuries,‚Äù he said, referring to the overhead luggage compartments, before an airport official whisked him back into the Reflection Room, a quiet center in the airport for thought and meditation.

The crash comes after a remarkable period of safety for airlines in the United States. It has been four years since the last airline crash ‚Äî a safety record unmatched for half a century. It involved Colgan Air Flight 3407 (operating as Continental Connection Flight 3407), which crashed on approach to Buffalo International Airport, killing 50 people, including one on the ground on Feb. 12, 2009. Globally, as well, last year was the safest since 1945, with 23 deadly accidents and 475 fatalities, according to the Aviation Safety Network, an accident researcher.

San Francisco General Hospital, the city‚Äôs trauma center, had received 34 patients as of 8:40 p.m. Eastern time on Saturday, according to Rachael Kagan, a hospital spokeswoman.

Dr. Chris Barton, the chief of emergency services at the hospital, said, ‚ÄúWe have seen a lot of patients with spinal injuries.‚Äù He said those injuries included spinal compression and burst vertebral bodies, the largest part of the vertebra.

Doctors also saw patients with fractures of their long bones and blunt-force injuries to the head and abdomen.

Some patients had been discharged, but the hospital provided no details.

It was not immediately clear what caused this plane to lose control on a clear summer morning. The National Transportation Safety Board said it had dispatched a team to from Washington to investigate, and declined to speculate. But witnesses said that the plane approached the airport at an awkward angle, and it appeared that its tail hit before it bounced down the runway. When it stopped, they said, passengers had scant time to escape before a blaze burned through the fuselage.

‚ÄúI looked up out the window and saw the plane coming in extremely fast and incredibly heavy,‚Äù said Isabella Lacaze, 18, from Texas, who saw the crash from the San Francisco Airport Marriott Waterfront.

‚ÄúIt came in at a 30- or 45-degree angle and the tail was way, way lower than the nose,‚Äù said another witness, Ms. Turner.

‚ÄúI remember watching the nose go to the ground and the tail way up in the air and then the tail back to ground hard,‚Äù Ms. Lacaze said. At that point, she said, the tail snapped off and the rest of the plane skidded down the runway.

‚ÄúThe smoke was not bad at all at first,‚Äù she said. ‚ÄúIt was like one cloud. It took maybe a minute or two for the chutes to come out of the side,‚Äù she said, and people began to pour out almost immediately.

‚ÄúThe back got the worst of it,‚Äù a passenger on the plane, Elliot Stone, told CNN. He said that the plane seemed to be coming in at a sharp angle and just as they reached the runway, it seemed to gain speed. It struck the tarmac with tremendous force, he said, and the people in the back of the plan ‚Äúgot hammered.‚Äù

Some passengers scrambled out of the plane even before the chutes deployed, he said. A number of people lay injured near the wreckage for 20 to 30 minutes before ambulances arrived, Mr. Stone said. Many people got off relatively unscathed, he said, but he saw at least five people with severe injuries.

David Eun, who said in a Twitter message that he had been a passenger on the plane, posted a photograph of a downed Asiana jetliner from ground level, which showed some passengers walking away from the aircraft.

Flame retardant materials inside the plane, including foil wrapping under the seats, most likely helped protect many passengers said Steven B. Wallace, who was the director of the office of accident investigation at the Federal Aviation Administration from 2000 to 2008.

The F.A.A. has required the use of such materials for several decades. Mr. Wallace said that even though an Air France A340 suffered a worse fire after overrunning a runway in Toronto in 2005, all 309 people on board survived. Only 12 were seriously injured. ‚ÄúIt seems clear that the airplane hit short of the runway,‚Äù Mr. Wallace said. ‚ÄúWhy that happened, I don‚Äôt know.‚Äù

Mr. Wallace, who is a licensed commercial pilot, said the pilot could have made a mistake and come in too low or there could have been wind shear.

An aviation official, who did not want to be identified discussing a developing investigation, said that the plane was not making an emergency landing, and that the situation had been routine until the crash.

If the plane touched down too soon, before the tarmac or before the area intended for landings, it may have torn off its landing gear, and been skidding along on its engine cowlings, said Arnold Reiner, a retired airline captain and the former director of flight safety at Pan Am. ‚ÄúAt that point, all bets are off,‚Äù he said, and the tail may have hit the ground with more force than the fuselage was intended to handle.

One question for investigators, Mr. Reiner said, is who was at the controls. The 777 has a two-pilot cockpit, but on a flight that long, there is typically a ‚Äúrelief pilot‚Äù or two on board, so no one has to work continuously for such a long period. That may have resulted in a junior person at the controls.

South Korean carriers have faced safety difficulties in the past. In August 2001, the Federal Aviation Administration froze service from South Korean carriers coming into the United States, limiting them to the schedules and aircraft they were then flying, because it said that safety regulation by the South Korean government was inadequate. The restrictions were later lifted.

In December 1999, a Korean Air Lines 747 cargo jet crashed near London. Delta Air Lines canceled its code-share agreement with Korean Air until Korean improved. In August 1997, a Korean Air 747 came in short of the runway in Guam, killing 228 people.

Asiana Airlines, established in 1988, is based in South Korea and flies to Los Angeles, Seattle, Chicago and New York, in addition to destinations in Europe, the Russian far east, China, Southeast Asia and elsewhere.

It said in a statement that it was trying to find the number of casualties and the cause of the accident, and that it would ‚Äúcooperate with the related authorities.‚Äù Of the 291 passengers, the statement said, 77 were South Koreans, 141 Chinese, 61 American and one Japanese. A crew of 16 was also on board.

The transportation safety board said it would examine a variety of factors, including human performance, weather and maintenance. Mr. Wallace said the flight data recorder on the Asiana 777 was probably in the part of the tail that broke off. But he said the containers for the recorders were so rugged that the data should be intact.


Thank goodness so many survived.

They just announced that all passengers have been accounted for.
0 Replies
0
Reply Sat 6 Jul, 2013 09:37 pm
@Region Philbis,
Quote:

the cockpit appears to be intact, so authorities should have the black box in their possession by now...

The black boxes are in the tail of planes not the cockpits but the pilots are likely to be intact.
2 Replies
1
Reply Sat 6 Jul, 2013 09:38 pm
@BillRM,
Could be. Black boxes are sometimes more honest.
1 Reply