What was the main reason that Germany lost w.w.2? 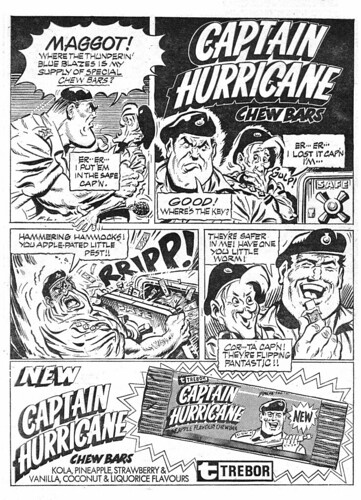 The Germans lost because they didn't have this guy:

Ah, but Germany had many, many Generals....

I thought Sgt. Rock was in the Korean Conflict?


He probably was there as well

Sgt Nick Fury was in WWII and eventually ended up running a secret para-military organization called S.H.I.E.L.D. in the Marvel universe. He held up remarkably well over four or more decades with only some greying at the temples.
0 Replies
0
Reply Sat 22 Jun, 2013 10:25 pm
@Setanta,
Quote:

Finally, this silly claim is predicated on the notion that Britain could have been starved by an aggressive submarine campaign. ...

There's nothing silly about it.

The situations of Japan and England were not that different. US subs did most of the work of annihilating the Japanese merchant fleet with somethig like one or two percent of the manpower of the US Navy.

There's one other thing which Germany could have easily and cheaply done which would have been to build small carriers like our own Lexington class to go out with the wolfpacks. Unlike the situation in which English, Japanese, and US carrier doctrine called for a mix of fighter, bomber, and torpedo plane types, German carriers would have needed only carrier fighters; the U-Boats would have been the striking arm of the whole thing, a small carrier hanging twenty miles back from a wolfpack could have provided fighter cover to prevent escort vessels from attacking the U-Boats. A fighter with just heavy cal machineguns could make mincemeat out of a destroyer in those days.
1 Reply
2
Reply Sun 23 Jun, 2013 03:34 am
@gungasnake,
The situations in Japan and England were radically different. Japan could not feed itself, even before the war. Japan needed to import food, even before the war. A video about the submarine campaign against Japan is a complete non-sequitur. England was able to feed itself--which is why i used the word starve--look it up if you need to.

But more than that, England could provide its own electrical generating capacity through coal-burning power plants, which is what they were doing already. Japan could not provide coal or fuel oil for electrical generation without importing those commodities. I already noted that an aggressive submarine campaign would have, for a time, reduced the amount of war materials which reached the United Kingdom--but not by very much and not for very long. Canada produced the ships it needed to escort convoys, and produced them using their own iron ore and their own ores for other metals, made usable in their own smelting and foundry operations. They then used those materials in their own shipyards to build the escort vessels they needed for convoy duty. While it is true that their capacity to build destroyers and larger craft was limited by their ship building capacity on the St. Laurant river, they relied on mine sweepers and corvettes, and later frigates, built in their Great Lakes shipyards, and delivered under their own power to the St. Laurant through the Rideau Canal system. Both Canada and the United States had the shipyard capacity to build (and did build) merchant ships faster than the Germans could sink them.

England was not the aggressor, they didn't need to continually produce offensive weapons in order to survive. Japan, on the other hand, had no "dominions" like Canada, and no allies like the United States to make up any shortfalls in their production. Furthermore, they were the aggressor and needed to continually produce war materials, weapons, ships and planes to continue to prosecute their war. England could have (and did) wait out the defeat of the submarine attack on shipping--Japan enjoyed no such luxury.

As usual, you don't know what the hell you're talking about.

By the way, your video is wrong--American submarine warfare did not become a significant contributing factor in the war until well after the Japanese navy was reduced to a small, ineffective collection of ships, and their highly expensive air forces--land- and sea-based--were nearly wiped out. This was because American torpedoes sucked, and BuOrd (the Naval Ordnance Bureau), being pig-headed, refused to recognize that and act on it--not until well into 1943.

When the war started, the submarine force was immediately sent into action, with the order to wage "unrestricted submarine warfare" against Japan. As it turned out, it would be 18 months before this really happened, and most of the problem during that time was torpedo related.

Up to a point, the American experience paralleled that of the Kriegsmarine (German Navy), which experienced its own torpedo problems during the Norway campaign.

Initially, there was a depth keeping problem. A torpedo set to run at fifteen feet would actually run as much as ten feet deeper. This problem was compounded by the blunt statement from the Bureau of Ordnance that there was nothing wrong with the depth keeping mechanism, and the commanders were obviously just missing their targets.

Eventually, it was no longer possible to ignore the commanders' complaints. Tests were run, using the relatively simple expedient of firing torpedoes at a fish net, and it was confirmed that the Mark-14 torpedo was running ten feet deeper than set. After this, BuOrd finally did their own tests, at last conceding that there was a depth problem. The commanders were ordered to adjust the depth settings to compensate for the error, and new torpedoes were modified to fix the problem.

This having been accomplished, it was presumed that the success rate would now soar.

Commanders were complaining that, even with the corrected depth settings, and perfect shots, the magnetic exploders were either detonating prematurely, which only served to warn the target and alert the escorts, or they were passing under the target and not exploding at all.

This was the second time where American torpedo problems ran along the same lines as German torpedo problems (though the German depth keeping problem came from a leaky seal on a balance tank, and not from an engineer rather stupidly basing the settings on practice torpedoes with warheads that weighed 200 pounds less than the production version). In Norway, the u-boats had experienced the same problems with prematures and failures, using their own magnetic exploders.

The two experiences diverged at this point. The Germans recognized the problem, ordered the magnetic exploders deactivated, and went back to blowing up targets. The Americans, on the other hand, insisted that the exploder worked, and that the problem had to be in the people using it.

Source. That's just an excerpt, there's more information on the torpedo problems at the site linked.

I already noted that an aggressive submarine campaign would have, for a time, reduced the amount of war materials which reached the United Kingdom--but not by very much...

https://www.google.com/search?client=opera&q=%22battle+of+the+atlantic%22&sourceid=opera&ie=utf-8&oe=utf-8&channel=suggest
2 Replies
2
Reply Sun 23 Jun, 2013 11:48 am
@gungasnake,
I don't know, gunga, on what kind of submarine/u-boat you've served and were you heart German military esp. naval history ....
... but I'm sure, they taught you about
- what Canadian engineers did with the B-24 (hint: "liberator"),
- what a certain Lt.-Col. Millis R. Jefferis invented (hint: "Winston Churchill's toyshop"),
- and why Wing Commander Humphrey de Verd Leigh was important to this topic as well (hint: Leigh Light).

The three nations which used carriers in WW-II all had the same doctrine i.e. their carriers carried a mix of fighters, dive bombers, and torpedo planes.

For the purposes of the Battle of the Atlantic, German carriers would have needed only the fighters since the striking arm of the thing would have been the U-boats. U-Boats and small carriers could have protected themselves in a synergistic way i.e. the subs could easily have kept British capital ships away from the carriers and the carrier planes could have kept B24s and the like as well as destroyers away from the subs. Moreover the force of such small carriers would have been magnified by a factor of three by not needing to carry bombers or torpedo planes.

That's one of a dozen or two dozen things Nazi Germany could have done which would have likely won the war for them.
2 Replies
1
Reply Sun 23 Jun, 2013 01:46 pm
@gungasnake,
Yeah.. just like German fighters kept B24s from bombing the German homeland

They wouldn't have lasted long enough to get out of the North Sea. Try reading Alfred Thayer Mahan on the subject of what is necessary for successful commerce raiding, your ignorance is appalling.
1 Reply
1
Reply Mon 24 Jun, 2013 02:17 am
@gungasnake,
Here Mr. Educate Yourself, from Wikipedia, the first hit on the search page you linked:

It is maintained by some historians[who?] that the U-boat Arm came close to winning the Battle of the Atlantic; the Allies were almost defeated, and Britain was brought to the brink of starvation. Others, including Blair[54] and Alan Levin, disagree; Levin states this is "a misperception", and that "it is doubtful they ever came close" to achieving this.[55]
The focus on U-boat successes, the "aces" and their scores, the convoys attacked, and the ships sunk, serves to camouflage the Kriegsmarine's manifold failures. In particular, this was because most of the ships sunk by U-boat were not in convoys, but sailing alone, or having become separated from convoys.
At no time during the campaign were supply lines to Britain interrupted; even during the Bismarck crisis, convoys sailed as usual (although with heavier escorts). In all, during the Atlantic Campaign only 10% of transatlantic convoys that sailed were attacked, and of those attacked only 10% on average of the ships were lost. Overall, more than 99% of all ships sailing to and from the British Isles during World War II did so safely. (emphasis added, obviously)

Once again, i said that at no time was the UK in danger of starvation--and that's true. More than that, though, and you need to educate yourself by reading the sources at the search page you linked, the Allies continued not only to supply the UK, but to build up the forces necessary to carry the war to the Germans, and, ultimately, to Germany.
0 Replies
1
Reply Mon 24 Jun, 2013 04:04 am
@gungasnake,
gungasnake wrote:

That's one of a dozen or two dozen things Nazi Germany could have done which would have likely won the war for them.


Certainly. And the others would have done (or did) nothing to prevent this.

The (Neo-)Nazis in Germany and all over the world must be happy to have you with them, Volksgenosse gunga!
1 Reply