How much Woodchuck cider would a woodchuck chug.... In truth, I prefer Scotch.

I asked the little liquor store over by mr vw's (across from wally) about bard's tale beer, and the little gal (verra smokin' hot) was interested enough to bring it in and make a little gluten free shelf in the cooler.

which has since been expanded to 3 shelves, and includes 4 varieties of cider.

they were surprised at how many folks are buying GF alcohol...
1 Reply
1
Reply Mon 10 Jun, 2013 02:22 pm
@Rockhead,
Ill have a Granny Smith every month or so in really hot weather or if we are having ribs. 802 is OK but it gets a bit sweet unless you use ice
0 Replies
0
Reply Tue 11 Jun, 2013 03:34 am
@tsarstepan,
I've never come across anything else but alcoholic cider or zyder as they say in Somerset. You can't beat this stuff.

Brewed by this guy. 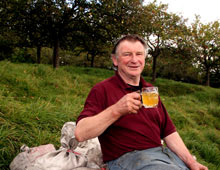 Here he is with Jamie Oliver, but I wouldn't hold it against him. 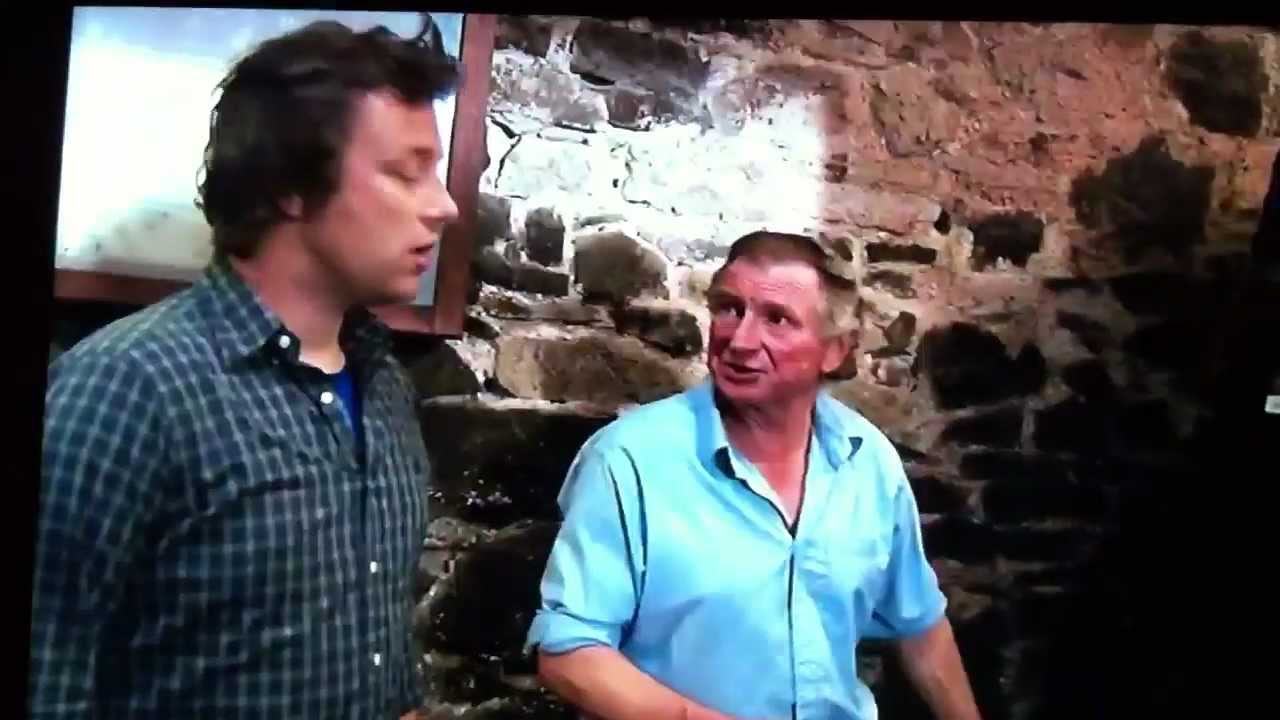 One of the best things about visiting, is you always get free samples. My mate had three free pints before we bought some to take home, unfortunately I was driving so I had to wait until we got home.
0 Replies
3
Reply Tue 11 Jun, 2013 05:24 am
THE "old fashioned" apple varietals have been quested by these new hard cider companies. The rise in hard cider ales has been fairly recent and those varietals like "Winter Banana", "Cirtland" and "Ancient Rome" (not the sappy Romes of today, have been sought out in apple expeditions throughout Maine New Hamster and Vermont. Old farmsteads, now ruins deep in the woods, still had a few old apple trees that, after 150 years, had bent over and sent up daughter trees that are now over 100 years old . The brewers have taken scions of these trees to graft onto Staymans and other . more astringent varietals cause you dont want really sweet apples to make great hard cider.

I helped a cider maker in Maine several yers ago while on vacation. We mapped tree locations and varietals (I guessed at the varietals from a quick course by an expert). But what I left was a map of old homesteads in the Meddybemps to Calais area, where the old settlers and logging farms were next to the Indian Reservations. All these places had orchards of different varieties of trees , most of which were cider "friendly"

These apples were , in most cases, bitter and astringent and were a carrier of a deep apple flavor that the cidermen made a bit sweeter with sorghuim or sugar . There are many new brands still coming out of New England and Michigan (I even heard that theres gonna be a cider brewery neat Gettysburg , which is right in the heart of PAs Apple country)
So the search for these old varietals is still going on and the grafting skills of nurserymen will bring several of these varieties back to life.
1 Reply
0
Reply Tue 11 Jun, 2013 06:03 am
@farmerman,
When brewing cider, it's always a good idea to use more than one variety of apple, and a few crab apples wouldn't go amiss either.
1 Reply
1
Reply Tue 11 Jun, 2013 09:48 am
@izzythepush,
over here they make varietal ciders. Its probably a cultural thing but cider was a beverage of choice
The stuff they sell at farmstands in the Fall around here is made from several varieties all mixed but in making hard ciders, the recipes were kept fairly uniformand that included the apple varieties. Maybe one or two at most.
Some made ciders of Cortlands and Raspberries Ive heard that was a tangy summer booze.

Some of the Ones they began making up in Maine were at least 10% alcohol (Dogfish Head brewery makes some naturally carbonated malt beverages of 19% alcohol)
0 Replies
1
Reply Tue 11 Jun, 2013 07:05 pm
@tsarstepan,
inspired by this thread, and 1-- degree temps, I set out to expand my cider knowledge today.

got an assortment pack from angry orchard.

different, but tasty in a strange flowery way...
0 Replies
1
Reply Tue 11 Jun, 2013 09:30 pm
I have now sampled all 4 angry orchard flavors, and they are each very different in their own way.

and I gotta say that they get an A+ for labeling. verra cool funky trees...

the apple ginger was my last, and I may like it best, or I could be getting too buzzed to be objective. it tastes like christmas hot cider. but ice cold.

I'll drink it first next time and report back...
1 Reply
1
Reply Wed 12 Jun, 2013 01:12 am
@Rockhead,
We get flavoured ciders over here too. I picked up some Swedish strawberry and lime cider that was on special offer the other day.

There's a soft drink made with elderflowers that has long been called elderflower champagne until it fell foul of EU regulations.
1 Reply
1
Reply Wed 12 Jun, 2013 01:58 am
@izzythepush,
izzythepush wrote:

There's a soft drink made with elderflowers that has long been called elderflower champagne until it fell foul of EU regulations.


But only because "champagne" is 'champagne' (It's now called Elderflower Fizz or similar - but you can buy it from farms [and at abbey/castle shops] still under the old name .... we did so last year, and our hosts produce some on their farm.

There are 50 UK protected food names (PFNs) by the way, including ciders and perries.
1 Reply
1
Reply Wed 12 Jun, 2013 02:30 am
@Walter Hinteler,
I wasn't deliberately bashing the EU, but I'm sure even in Europhile Germany there's something about Brussels that irks the general populace.
1 Reply
1
Reply Wed 12 Jun, 2013 02:52 am
@izzythepush,
Certainly there is ... but for a German speaking person "champaign" always is related to "champagne" - since we had own productions of "Sekt" and "Schaumwein" (sparkling wine) from 1830 onwards. (And we got in 1902 that famous Sektsteuer ('sparkling wine tax'), whose purpose originally was to built a better fleet than the English. [Now, it's used to buy champagne for official state visits ... or whatever

]
1 Reply
1
Reply Wed 12 Jun, 2013 02:58 am
@Walter Hinteler,
The argument over here was that anyone producing sparkling wine outside of the Champagne region certainly shouldn't be allowed to call their product champagne, but elderflower champagne wasn't a sparkling wine. As a soft drink there was no way anyone would be fooled into thinking it really was champagne, that the term 'elderflower champagne' had been used for a very long time and should be allowed to continue.
1 Reply
2
Reply Wed 12 Jun, 2013 03:40 am
@izzythepush,
Ah well, similar to "Swiss cheese" and Swiss cheese.

Does anyone have a preference towards or prejudice against nonapple based/tainted fruit ciders? Pear cider? Etc...?
1 Reply