Why I hate the subway

Always on the coldest days there are subway breakdowns causing major delays so us saps are forced to stand in the cold freezing our a$$es off.

But to add to this is the bonehead idiots when this happens. So I am coming into the subway station - I see above that the train is boarding so like all the other sheep - I start running for it. When I get down the stairs I see the train waiting with the doors still open.

But alas - it is filled to the brim - I look down the platform and although the train is there, I spy that many people are waiting on the platform so it does not make sense for me to try to go further to find an open slot to squeeze by butt in it. Obviously there is some sort of issue and there is no more space.

Then there is an announcement saying there is a car at a further stop that is broken down - and I also see the next train coming is just two stops away - realizing that it makes no sense to squeeze in.

But then idiots appear - they run down and try with vain to squeeze in - I try to tell them that look another train is just a stop away wouldn't it make more sense just to wait? But no she had to squeeze in -- then another does the same thing so that people are overflowing and the doors won't be able to close.

Then a train comes from the other direction - me, along with about 6 people that have arisen from the bonehead status board the train going in the other direction - go down one stop and then board the next subway that most of these idiots trying to squeeze on either manage to squeeze on this train when it comes 5 minutes later - or else is forced to wait for the next train because of the idiot subway system cannot function efficiently unless the weather is perfect and all the stars align.
0 Replies
1
Reply Tue 21 Jan, 2020 08:27 pm
@tsarstepan,
Bump
0 Replies
1
Reply Tue 21 Jan, 2020 08:28 pm
There isn't enough posts in this one thread to need that bumping fix.
1 Reply
1
Reply Tue 28 Jan, 2020 12:52 pm
@tsarstepan,
PSA: Subway Poles Are For Hands, Not Peanut Butter 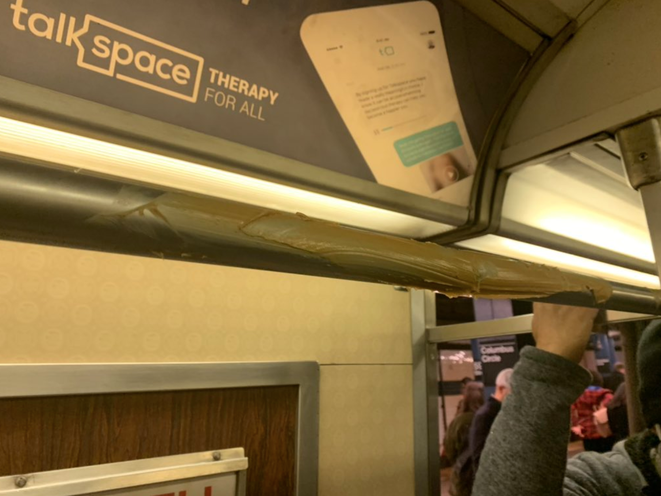 0 Replies
3
Reply Tue 28 Jan, 2020 02:50 pm
I used to ride from Brooklyn to Manhattan for work. I brought a book along most of the time. I saw people do some odd things, but the worst thing I experienced was a time I had my mind in some otherworldly state and put my hand up to hold the bar. I didn't notice anything strange until the man next to me said to get my hand off of his. If I had been trying to hold hands with him it could not have been more perfect placing. I jerked my hand back and turned away, hoping it would not turn into something terrible. We were at my stop and I hurried to get off of the train.
1 Reply
1
Reply Fri 14 Feb, 2020 11:38 am
@edgarblythe, PSA: Subway Poles Are For Hands, Not Peanut Butter

A 26-year-old man from Dorchester was arrested Sunday after allegedly biting another passenger on the Red Line, according to transit police.

Police responded to Andrew Station around 1:15 p.m. for a report of an assault. Upon their arrival, a man and woman told officers the assault had occurred while they were traveling on a Red Line train. Police said the couple reported that while they were between Fields Corner Station and Andrew, a man they did not know began verbally harassing them.

The man, later identified by police as Bernadino Baran-Garcia, then began to physically assault the 22-year-old male victim, according to police.

“The victim attempted to create distance from Baran-Garcia but was unsuccessful,” police said. “At one point Baran-Garcia grabbed hold of the victim’s arm and bit into it.”

When the 22-year-old’s girlfriend attempted to stop the assault, Baran-Carcia allegedly grabbed her hair and pulled it “sharply.”

Officers located Baran-Garcia “acting aggressively by pounding on his chest and using profanities” at the bottom of the station escalator. When they approached, officers “observed a 40 OZ can of beer protruding from his jacket pocket and the odor of alcohol about his person.”
1 Reply
1
Reply Mon 9 Mar, 2020 10:13 am
@Linkat,
Subway adjacent news:
The head of the Port Authority of New York and New Jersey has the coronavirus, as the outbreak spreads despite measures to curb it.
1 Reply
1
Reply Thu 14 May, 2020 09:29 am
@tsarstepan,
This hasn't happened to me ... yet. But it's a nightmare scenario when commuting with friends and others.

1 Reply
1
Reply Thu 14 May, 2020 09:44 am
@tsarstepan,
This reminds me of once when I was communing. It was one of the more crowded areas of the Boston subway stations - a major station where alot of people change train lines.

I saw this young preteen aged boy - he was by himself and I overhead him as he was found a police officer explaining how he got separated from his family. This was prior to everyone having cell phones. You could tell that he was a tourist and not familiar with the area. I was thankful he knew who to seek out for help.

This reminds me of once when I was communing. It was one of the more crowded areas of the Boston subway stations - a major station where alot of people change train lines.

I saw this young preteen aged boy - he was by himself and I overhead him as he was found a police officer explaining how he got separated from his family. This was prior to everyone having cell phones. You could tell that he was a tourist and not familiar with the area. I was thankful he knew who to seek out for help.

Had to be a scary moment for family and the boy.


I've happened upon this scenario several times before. And thankfully, there's a brief two or three second period where immediate strangers jump to help devise the obvious solution: coordinate that the person on the train get off at the next stop and wait for the remaining passengers in the lost person's party to catch up on the next same direction train. It's quite fascinating how often this is settled in such a brief period of time (and no cell phones involved).
1 Reply
1
Reply Sat 18 Jul, 2020 02:12 pm
@tsarstepan,
RECOMMENDED BY EXPERTS UPDATED JULY 14, 2020
How to Travel and Commute Amid the Coronavirus Outbreak, According to Experts

Much of the advice they gave us back then — like maintaining social distance and keeping hand sanitizer, disinfecting wipes, and tissues close at hand — remains in place. But now, more than three months into the pandemic, the doctors shared some new best practices for travel and commuting. Arguably the most important: Wearing a mask in transit is essential to minimize the chance of spreading and contracting COVID-19.