WASHINGTON – Uniforms for U.S. Olympic athletes are American red, white and blue — but made in China. That has members of Congress fuming.

Republicans and Democrats railed Thursday about the U.S. Olympic Committee's decision to dress the U.S. team in Chinese manufactured berets, blazers and pants while the American textile industry struggles economically with many U.S. workers desperate for jobs.

They are also ranting about the beret that's part of the uniform - saying it's something the French would wear... someone said this morning that "Hugo Chavez also wears a beret!"

I get the argument about giving that business to the US - letting US workers get the benefit of that uniform business (the jackets alone cost something like $400 for the women's and $600 for the men's). It's just hard not to think of all this ballyhoo as more political maneuvering.

I mean shyt - some of the US military uniform apparel isn't made in the USA (at least it wasn't when I left active duty in 2010). And the whole Army was wearing berets for 10 years, until they wised up about 18 months or so ago and went back to the regular utility cap.

Little smelly, but that's it.

Cycloptichorn
0 Replies
1
Reply Fri 13 Jul, 2012 09:29 am
Many armies and other types of disciplined bodies around the world wear berets, many sections of the British Army do, and to say they are a bad thing because "the French" do is one of those things that make many people think Americans are stupid. What is wrong with being French anyway?

OK, i missed that until i read back through it.


It is generally a good idea to make sure you know what you are talking about before making a knob of yourself. (Oh, I forgot who I was talking to.)
1 Reply
1
Reply Fri 13 Jul, 2012 10:19 am
@snood,
there was a short-lived fit one year when the Canadian uniforms were made in the U.S. 0 Replies
2
Reply Fri 13 Jul, 2012 11:40 am
@snood,
Bah. If they purchased American then someone would be screaming about how they wasted money by not bidding it out.

Damned it they do, damned if they don't.
0 Replies
Below viewing threshold (view)
-5
Reply Fri 13 Jul, 2012 11:51 am
@contrex,
Hey, asshole, shall we go back to look at all the threads in which you have made a blatant "knob" of yourself? You must have been looking in the mirror when you wrote that.
0 Replies
6
Reply Fri 13 Jul, 2012 11:59 am
As the US has the highest incarceration rate in the world--I nominate an Orange jumpsuit as the Olympic Uniform.

Cyclo...took me a while to figure out your post LOL. Finally got it

Beth: Sorry, read your post wrong (lol only had one coffee this morning). Anyway, youse guys made ours twice - we liked 'em! 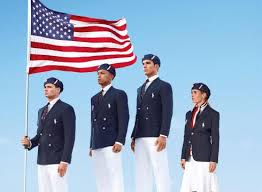 he draped his space with giant red white and blue banners. called himself the American tool company or somesuch...

I walked through one time, just to be sure of what was up.

what better way to portray America's athletes than to dress them in Chinese made clothing.

it is a blatantly accurate portrayal of us as a society...

I think Canada made them twice.

Did ya know THAT Harry??? Huh? Didya?
1 Reply
1
Reply Fri 13 Jul, 2012 06:38 pm
@Irishk,
Roots is actually an American/Canadian company, founded by two guys from Michigan who spent summer in cottage country in Canada. Their first store sold shoes in Toronto and employed many members of SCTV fame.
1 Reply