200 Days to ING Marathon- Will Joe be ready?

So go we went, up to the top of Ft. Washington then down the hills to Ft. Tryon and back. Just a short hop...more tomorrow, a lot more in the coming days.

Much much more in the coming days.

Running home the next two nights.
That's a couple of miles in the Park then left on to 103rd Street, thru apartment buildings, across Broadway and Riverside Drive then down the hills under the highway to the Hudson. 6 miles
So flat on the river trail you could almost fall asleep until......you get to the George Washington Bridge. two miles more.

Then it's up, up, busting your lungs and everything else until you reach the Henry Hudson Parkway.... nice.

Cross over and then

up, up upup up 181st Street.
The dogs in front of Starbucks don't even look up as you thunder past trying to best the light at Ft. Washington because, from there, it's all down hill. about ten to the finish.

PS What charity should I run for tonight?
Achilles
Feeding America
The Global Fund
Habitat for Humanity
Pencils of Promise

www.Charitymiles.org Check them out, download and start earning $$ for who you like best. We can make a team soon, they promised.

this clockwise/counter-clockwise thing came up in conversation with hamburgboy the other night.

he lives in a retirement residence with a nice measured mile walk around the building. he commented that the women all walk one way around, while the men all walk the other way around.

my conclusion is that one of you is ..... mmmmm going the wrong way
1 Reply
2
Reply Wed 29 Aug, 2012 08:09 am
@ehBeth,
Don't the Spanish have some kind of courting tradition in which the men circle one way and the women circle the other?

Joe(hey,,,the Spanish invented speed dating!)Nation
0 Replies
2
Reply Thu 30 Aug, 2012 07:37 am
So, it turned out to be more like 8.7 miles. There is a new section of path that takes you right down onto the riverbank in the last part, maybe that is where the shortcut took place or....dun dun dun...I measured that route with my old watch which was only calibrated by my footsteps (You run a measured mile and input the info, the watch uses that measurement from then on.) Last night, both my iPhone and the Garmin said :8.7 .

Now I am wondering what other distances I have in my head that are wrong.

Joe(I am wondering, but I not getting bent out of shape about it.)Nation 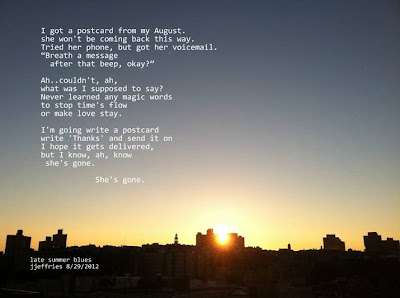 http://www.frenchroastny.com/uptown/menu.aspx?mid=26
1 Reply
3
Reply Fri 31 Aug, 2012 08:38 am
@ossobuco,
It makes no sense to publish the menu unless all the rest of y'all want to join us on the dates in question (which I forget at the moment....later this month and next.)

Besides, we always order the same thing: Big Cafe Au Laits, the Moroccan Omelet for me and some kind of veggie thing for Thomas.

~~
Did four in the park, up the East Side down the big hill and up the other side to the water fountain then down to the street and the 110th Street Station.
I was very lucky to get passed just before the downhill by a very trim woman in her 30s, I decided, as runners often secretly do, that I had to beat her to the water fountain. heh heh heh.
Yes. I am secretly racing you.
Trouble was 1) she figured out right away when I passed her that it was a race and 2) she was not in the mood to be passed.
She passed me.
The only thing she did not know for sure was where the finish line was. Again, heh, heh, heh.
I waited until the roadway flattens out down by the beeeeuuuutiful Haarlem Meer.

Then I let her have it.
I turned my music (161 beats per minute from Podrunner.com) UP! And starting hitting it.
Did I mention that, from this point on, it's all uphill?
'Tis.
Hills, uphills anyway, are my friends.
Did I mention that I had a dollar fifty in quarters that I had put for safe keeping inside my Rubbermaid lunch container inside my little backpack??

(Yes, I run with a little backpack. Where else am I going to put my lunch, New Yorker magazine, extra shirt and socks [I like dry socks] and that orange that I had leftover from the aforementioned lunch.)

Those quarters were making a lovely tamborine-ish thrumble noise, the only problem was I couldn't hear the footsteps of my nemesis, (Okay. It's over the top to call her a nemesis, um, "Mystery Competitor") it was not helping that I had the music up so loud either.
So, I took a peek behind me.

Twenty yards ,,,,with a quarter mile to go. (!!)
I just tried from that point just to go steady, the road rises steeply just as you go under the big rock outcropping which I always pray will not fall on me as I pass under it.
(Then, I think, boy, that would be a great way to go. Make the all the papers~~
[New York Daily News: Local Runner Rocks It All The Way]~~
[New York Post: STONED IN THE PARK~~
and
[The New York Times: Central Park Runner Killed by Outcropping.

and the Lawsuits would fly!!)

I rounded the corner and went full out to the water fountain.
TAG!
I turned around and caught a glimpse of the runner as she went further up the hill.
(Yes, the hill goes on past the water fountain, but I get to set the finish line. nnnyeah!)

Down the other hill to the subway, took a picture with some really nice kids who were taking pictures of each other on the platform. Lots of laughs when I told them that they owed me fifty bucks for my picture.

Joe(it a was rare night of real joy )Nation

if someone passes me, i sometimes try to increase my speed so i'm a few feet behind them, and then keep pace as long as i can.

I was shooting for 18, but forgot to bring my nutrition cookies and water became a problem after 10 (a place I thought would have water wasn't open.) I didn't go fast...hardly....ran up and over both sides of a ridge and then down through a really lovely nature trail (I knew there was water at the end of that trail.)
My sweetie called me because I had said I would be back by noon and wasn't.
That gave me the push in the last two miles to get home, get showered and get back out to go to brunch..

Just a short run of about 2.25 on Monday, then a drive back to Manhattan left me whipped. Ah, I got twenty miles in (almost 19.55) and it's only Wednesday. I'll run a bit tonight before heading uptown to a home-cooked meal.
(I can't tell you what joy that brings me to say that~ I've never been in a relationship with anyone who cooked. Isn't that odd?)

L. cooked but not for us, for guests or bike trips or parties.

You know....it's not so much of a punishment to write this one hundred times since I can copy and paste it.

I stuffed my pockets with a chocolate gel, a Powerbar, a honey-oat crunchy thing and two packs of gumdrops
these things:

Then I headed out on a route I've run before which takes me across three town lines, Glastonbury, East Hartford and Manchester, two or three times. Part of the run, the best part for me, is up over Spencer Hill which has a great view of the hills around the area. There is also the run through the Nature Preserve at 10 miles which is one of the nicest miles ever laid out for walkers and runners alike.

I just took my time but didn't loaf along because I said I would be back in time for lunch (started just after eight AM) and I was.

More stuff coming up, a half-marathon the first week of October. Then shorter runs throughout the month.

So, Sunday was the 18 Training Run in Central Park. I didn't go.
I went to Connecticut only after my sweetie made me promise I would run the 18 miles while I was up there.

I stuffed my pockets with a chocolate gel, a Powerbar,
a honey-oat crunchy thing and two packs of gumdrops

How will u handle it,
if a mugger ambushes u
along the way n robs u of your food ?

R u prepared to defend your property ?

David
1 Reply
5
Reply Thu 27 Sep, 2012 07:45 am
@OmSigDAVID,
Well, at this point, all a mugger would get would be whatever of the gel paks are left and maybe a cookie.
I don't carry anything on me of value except, I guess, my iPhone. The mugger is welcome to that; it's insured against loss or theft and I back it up on my home computer.

I downloaded my start position, you won't believe where I am starting due to my slow time last year..... .

Packed a lunch for train, got gels and goodies for the run and it shouldn't rain until I'm finished...
We'll see.

Staten Island went well. 50 degrees but not much wind. I got there early and ran about three and half miles before the start, then did my slooow marathon pace out to the the seven mile turnaround.
That's when the first drops started.
I picked up the pace, ate a couple of treats, got some Gatorade in me and ...
Hey...I see Thomas over on the other side, chugging away....He's a gamer, that one......more drops and about five miles to get to the end of the Half Marathon,,,,, I let it all go and almost ran hard the rest of the way in.
There's one long hill but once you are over that, you are home free, except for the distance.
I got to the finish, got handed a medal, a bagel and an apple. I ran a bit more over to the baggage to get my dry clothes while they were still dry, took some pictures of a nice lady who had just finished her first Half Marathon..and ran for the ferry.
Total miles --just over 17, not counting the run to ferry, so closer to 18, I guess.
Good day.
We gots medals.... .

I could have run more, I was running strong up the last hills, but still able to make jokes with the baseball team of young guys handing out water while calling out "Cold Beer, Get your cold beer here!"

How many feet high does a hill have to be in order to be called a hill?

How many feet high does a hill have to be in order to called "You nutbusting shitbag bastard of a hill!

Knowing those two figures could give us some perspective?

Did you get rained on before you finished? It started to blow in pretty good as the ferry made it across the harbor and it was pouring when we disembarked and ran for the Number One Train.

On to the next half-marathon. You're running Grete's Gallop next weekend with me, aren't you?
1 Reply
1
Reply Tue 9 Oct, 2012 07:49 am
@Thomas,
um. Nope. I couldn't get an entry. So, I'm running a twenty including Marcus Garvey Park, maybe start on the other side of the bridge and run on in.