200 Days to ING Marathon- Will Joe be ready?

I don't get warmed up until I hit about six miles, then, unless it's brutally hot, I am unstoppable.

What does ING stand for, please?

I thought he was talking about an ING savings account. 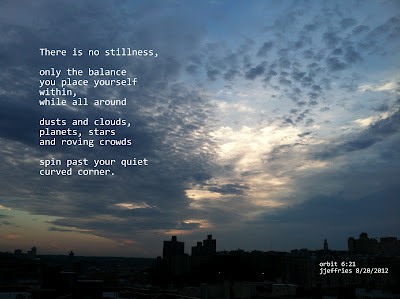 1 Reply
4
Reply Mon 20 Aug, 2012 07:50 am
@Joe Nation,
I did it.
Sunday's fifteen miler around and around and around Central Park. The pacer for the group (11:00) did great for the first five miles, then, ever so slowly, he and his partner began to creep towards averaging 10:40s. Meh. I did eleven with them and then decided to do four more on my own. That went well, except for being really slower than it needed to be.
I finished in just under three hours which puts me doing the Marathon in just over five hours. Averaged about 11:30 overall.

I think I can do better, well, part of me does.

It's hard to tell at times which part is doing the leading. 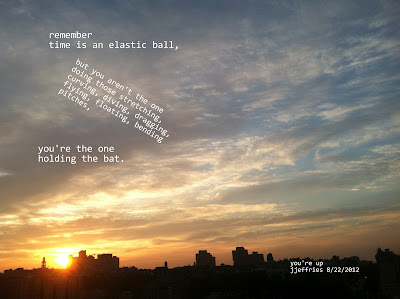 First, I want to thank everyone who keeps checking in on this thread.
I appreciate it.

I know, it's a giant MEME, but I kid myself into thinking that it might inspire somebody to do a marathon or something like a marathon; finish a book, or start a business, or, I don't know, just block out whatever they think is in their way.

Hope you don't mind that today's photo is a baseball metaphor, that sort of thing just happens.
~~~~
Sunday's run was done in groups, supposedly at a constant pace, with a stopping point at the top of the six, eleven, fifteen and twenty (I didn't go that far) mile loops.
I hate stopping. I don't know why they do it except everybody gets strung out because the leaders are going too fast ..... nevermind.

So we stop at the eleven mile point, I am 1) champing at the bit to get going and 2) getting chilled standing there. People are talking back and forth in the group as others trot up to the line, (we talk all the way through the run, it's supposed to be done at just less than an energetic pace), and one woman says
"This is as far as I've ever run."
She is now getting ready to do four more miles.
There are a lot of high fives and somebody asks her "How do you feel?"
"Really good." she says.
And about that time, off we went.

I was in no hurry. If you look at my paces for the last miles, they are in the 12:oo plus. I was trotting, meandering ....oh, look at the lovely sewer grate pattern...golly, what a wonderful view of the back of that guy's head..... .

At about mile fourteen, I passed the woman....she was going but just going.
I ran a bit farther and then remembered what I had decided would be my mantra for Sunday:
Inspire one other runner today.

That's harder than it sounds when you yourself are one of the least inspiring runners around.

I slowed down a bit, the woman came up on my left.
"You are really doing it today" I said, "You've got fifteen in the bag."
"Thank you" she said, "Now I just want to finish."
"Well, you are running really steady, moving along, now go for it."
"Okay." she said. "Okay, I will."

And with that she left me in the dust.
I'm serious.
I could not catch up with her in the last mile and a quarter.

~Yeah. It's like magic. I've had other runners do something like that for me in the last stages of races. It's a good thing to do.
I don't even remember running the last mile and a quarter so it's good for the inspire-r too.

I think I'm going to put something on the back of my marathon day shirt:

everyone
who
passes me
inspires
me.


Inspire me.
Pass me.

everyone
who
moves
inspires

(am I a moving van? an executive with a transfer? or is this just groovy)

everyone
who
runs
inspires

(how about people who are walking/rolling/hobbling?)

everyone
who
passes
inspires

The NYRR announced this morning that they would not be transporting baggage from Staten Island to the finish. People are up in arms.

I could care less.

Let me know if you don't know what baggage is.

The finish has ALWAYS been the worse part of the Marathon. Last year, it took me over forty-five minutes to get to my baggage truck, get my stuff and get out of the Park.
Three years ago, it took me nearly two hours to get to my dinner partners on the East Side because I had to wait for the baggage line and then couldn't just cross the Park, no,,,,,,I had to walk down to 72nd street (from W 83rd) cross under the Park and then walk up Fifth Ave to to, guess where?

I'm wearing my falling apart jump suit, a piece of last year's heat sheet and stripping it all off before talking off.

When I get to the finish, all I want is a new heat sheet, my metal and a chance to get around everybody to get to the A train to get home to my sweetie waiting for me with a medium rare steak and a big glass of red.

We have to plan these things WAY in advance.

What's the next race you are in? Me? The 18 miler and then the Staten Island Half.

Just carry an iPhone, MetroCard and 20 bucks. Maybe a dry pair of socks tucked in a pocket (in a sandwich bag or they won't be dry.)

Getting close to seventy days away now.
Running around the Cloisters at night, up and down (slowly down) the 130 stairs.....

Good...they both will be good tests for the 'no baggage" rule.

Who says they will be a good tests for the "no baggage" rule? I thought it applied only to the Marathon. The web pages for the tune-up, the Staten Island Half, and Grete's Gallop (you're not running Grete's Gallop?) all tell you where to put your baggage.

And even the New York Marathon won't be a no-baggage event for me, because I'll be flying my own personal baggage carriers in from Germany.
1 Reply
2
Reply Fri 24 Aug, 2012 09:30 am
@Thomas,
Oops, sorry.
I meant 'personal' tests. Yes, they will still have baggage on the 18 and the Staten Island races.

I have it in my head that I will run the 18, which finishes on the 103rd crossover, run another two miles down to 59th Street and back up to the Marathon Finish Line.
Then walk down the roadway, pretending it's the finish, (maybe get a drink from the vendor there by the Sheep Meadow.) take the 72nd Street exit, get on subway and see how long it take to get home, shower and then meet you at French Roast.

All with no baggage.