'Woodstock For Atheists': A Moment For Nonbelievers

Forums: Atheism, Atheists
Email this Topic • Print this Page
Reply Fri 23 Mar, 2012 11:58 am
I'm puzzled by this plan. I'm an atheist, but why would I want to celebrate being an atheist any more than I would if I was religious? BBB

Thousands of people are expect to descend on the Mall in Washington, D.C., on Saturday to celebrate not believing in God. It's being called a sort of "Woodstock for Atheists," a chance for atheists to show their power in numbers and change their image.

Every time you hear the word atheist in the media, there's always an adjective before it.

The "Reason Rally" could attract up to 30,000 people; organizer David Silverman says it marks a coming-of-age for nonbelievers.

"We'll look back at the Reason Rally as one of the game-changing events when people started to look at atheism and look at atheists in a different light," Silverman says.

Silverman, president of American Atheists, says this is a celebration, with famous atheists like Richard Dawkins, funny atheists like Eddie Izzard, and musical atheists like the rock group Bad Religion, who sings about "a careless creation where there's no above ..."

But the main point of the rally, Silverman says, is not to tweak the faithful. It's to encourage closeted atheists to take heart.

"The message is that if you can come out, you can out come out," he says. "And if you can't come out, at least you'll know you're not alone, and maybe sometime soon you'll be able to come out of the closet to your family."

'Coming Out Of The Closet'

Silverman says this is their moment, as important to atheists as the Stonewall riots were to the gay-rights movement four decades ago. But fellow nonbeliever Hemant Mehta says it's not easy to reveal your nonbelief. Atheism has an image problem.

"Every time you hear the word atheist in the media, there's always an adjective before it," he says. "It's always angry atheist, militant atheist, staunch atheist. It's never happy, smiling atheist."

Mehta, who writes a blog called The Friendly Atheist, says openly dismissing God in the most religious country in the West requires courage: You risk losing friends, family and even jobs because of your nonbelief. In poll after poll, he says, people say they don't like atheists; one showed that people think an atheist is more likely to steal than a rapist.

"People have this notion that atheists are immoral, not trustworthy, unelectable," Mehta says. "How do you change that at such a huge level? It starts by people everywhere just coming out of the closet as atheists."

Mehta helps run an atheist charity, and he's been invited to megachurches, such as Willow Creek near Chicago, to explain why he doesn't believe in God. He says atheists need to take a page from the gay-rights movement: If people know and love an atheist, they'll be less likely to stigmatize them.

But not everyone thinks that's the best approach.

"I'm not sure it is to atheists' benefit to always present a kinder, gentler face," says Greta Christina, a prominent atheist blogger and author of a new book called Why Are You Atheists So Angry? 99 Things That Piss Off The Godless.

Christina says there's a tension in the movement. On one side are what she calls "firebrands," such as Oxford biologist Dawkins, who has called some believers "staggeringly ignorant" and "insane." On the other are the "diplomats," such as Mehta, who deliver the same message of a Godless universe — but politely. Christina says every modern social movement — civil rights, feminism, gay rights — had the same tension, and you need both.

For example, nearly 300 atheists will meet with staffers at the House and Senate this week, partly to lobby and partly to show their numbers.

Silverman, of American Atheists, says atheists have time and momentum on their side. He says the fastest-growing segment of religion in the U.S. is no religion — people who identify as atheist, agnostic or secular. Just look at Canada and parts of Europe, Silverman says; religion there is going "extinct."

"I believe America is not far behind," he says. "I believe in two decades, we will be in a position where secularism is the norm."

That would be great, says Christina. But in the meantime, she has a more immediate goal. She wants to go to the Reason Rally and have a good time.

"This is going to be the event that you don't want to have missed out on," she says. "You don't want 10 years from now to say, 'I could have gone to the Reason Rally and I didn't because I had to do my laundry.' "

Just like Woodstock, she says. She only hopes it doesn't rain.

Well, obviously they are likely the activist type of atheists. To me, be activist about being without-theism is silly, but I guess they are doing it as a political thing to counter the recent moves by others to make politics about religion.

All I can say is that this is asinine.

Why would someone celebrate something that you do not believe in?

This is as obnoxious as an in-your-face born-again Christian.

1 Reply
1
Reply Fri 23 Mar, 2012 01:41 pm
@Reyn,
My thought, exactly. I could see it in the '50s when we were all required to bow our heads and at least pretend to pray - to show respect or something. In 2012, it makes as much sense as demonstrating for integrated restaurants.
0 Replies
1
Reply Fri 23 Mar, 2012 01:59 pm
@BumbleBeeBoogie,
Well, I am not an atheist--and frankly, I have more arguments with atheists than with theists, but I think it is time America grew up about the non-religious…and I think the idea of this rally makes sense.

The notion that one must “believe” in a GOD in order to be considered qualified for public office should offend every intelligent human being in this country…theist, atheist, agnostic, secularist…or whatever.

Such a notion sucks big time.

Good for the organizers.

0 Replies
2
Reply Fri 23 Mar, 2012 02:26 pm
Well, I think organizations based on atheism is a silly idea. The only thing they might have in common is non belief. After that, there is just a group of people without a cause. If we were getting hunted and imprisoned or exterminated, it might make sense. As it is, I don't know these people.
1 Reply
2
Reply Fri 23 Mar, 2012 02:34 pm
As so many others here have already said, this goes beyond dumb and runs right into inane. Promoting atheism in the same fashion that theists promote religion makes about as much sense as organizing a huge non-rock concert, replete with all the trappings (Klieg lights, teeny-bopper camp followers, pot on demand) of a major rock concert.
0 Replies
2
Reply Fri 23 Mar, 2012 02:41 pm
@BumbleBeeBoogie,
I heard this on NPR this morning and I couldn't help but keep rolling my eyes throughout the entire piece. I too am a professed atheist. I'm pretty open about it at work. Though I can't remember if I ever told my parents.
[It might have been this NPR report http://www.npr.org/2012/03/23/149021993/woodstock-for-atheists-a-moment-for-nonbelievers or one on the Takeaway.]

I was so annoyed how the interviewees kept using the "in the closet" analogy throughout the entire interview. This inappropriate adoption of the term will BACKFIRE from a great deal of backlash.

And no! I don't think I will regret not attending this alleged Woodstock for Atheists 10 or 20 years from now like everyone in the bloody interview kept talking-point dropping.

If we were getting hunted and imprisoned or exterminated, it might make sense. As it is, I don't know these people.


If that ever happens, I'll become Beni Gabor, the weasley character from the movie, The Mummy (1999). 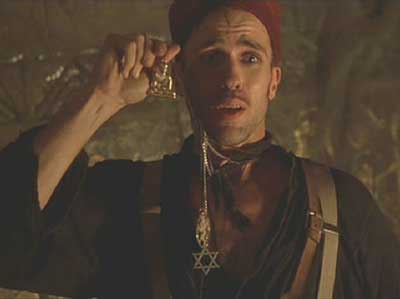 When confronted with the living mummy, the guy started appealing to the mummy by showing him a cross, a sickle, a star of David, and a buddhist figurine, all hanging on separate gold chains on his neck. He had all the major religions covered.


If it's one of these types, I'm jealous!

It's not stupid, and this kind of thing is long overdue. Being organized, and being passionate does not make one religious. The comparison is flawed in many ways, but the most of which I think noteworthy is that atheists and, in general, secular values have little of a public face.

We are utterly ignorable and offer zero political sway.

It's not stupid, and this kind of thing is long overdue. Being organized, and being passionate does not make one religious. The comparison is flawed in many ways, but the most of which I think noteworthy is that atheists and, in general, secular values have little of a public face.

We are utterly ignorable and offer zero political sway.

As I said earlier, I am not an atheist...but I sure support atheists speaking out this way...or any way they decide may break the stranglehold theism has on our government.

As I see it, the people seem to be excluding atheists from helping to govern the nation. I sure as hell am not satisfied with how the nation is being governed. Why not give atheists a chance!!!!

0 Replies
1
Reply Sat 24 Mar, 2012 08:18 am
@failures art,
I trust you will make a full report here, so that we can know better both sides of the question. I am not hostile to it. Just never saw a need for myself to be involved.
1 Reply