Forums: Tv, Television, War, M A S H
Email this Topic • Print this Page
Reply Sat 17 Mar, 2012 05:26 pm
Channel flipping today I came across an episode of MASH. This episode took place almost entirely in the operating room where body after body after body was brought in. The characters were tired and bitchy and snippy with each other. There wasn't a laugh track.

We were still in Vietnam when MASH first came on TV. It's really kind of amazing, when you think about it, that such a show ever reached the airwaves.

I started thinking about Bush's (the first Bush) 1991 ban on showing the dead soldier's coffins being delivered to Dover AFB.

That ban was lifted in 2009 but I can't imagine a new show with themes similar to MASH ever being produced right now. I think people would be outraged by a comedy show about wounded soldiers.

And people profiting from the black market.

And a soldier wearing a dress.

What do you think accounted for MASH's popularity back in the 70s?

Do you think a network could "get away with it" nowadays?

What about us has changed, if anything?
Type: Question • Score: 5 • Views: 3,895 • Replies: 15
4
Reply Sat 17 Mar, 2012 05:39 pm
I believe M*A*S*H*, set in Korea, was really about Vietnam. The characters were finely drawn and the stories reflect public attitude about war, in the time period. The cast was superb, even when one character left, to be replaced by an equally superb character with a personality all his own. It had comedy, pathos - everything you could want. The humanity behind the regulars was endearing and enduring. Hawkeye went from a reasonably young man to a graying older man during what was about a three year war.
1 Reply
2
Reply Sat 17 Mar, 2012 05:49 pm
@edgarblythe,
The book and the movie were about Korea but I agree that the show was about Vietnam.

I mentioned that we were still in Vietnam because it seems so odd to think of such a show airing during wartime.

It really was an exceptional show, with an exceptional cast, and exceptional characters. And, based on my viewing today it has really stood the test of time. It seemed as immediate and relevant and "real" today as when I watched it during prime time those many years ago.

It was really kind of heartbreaking.

very well written, all the way through.

even ferret faced frank had qualities folks could relate to...
1 Reply
1
Reply Sat 17 Mar, 2012 06:06 pm
China Beach was also a good show. I appreciated the emphasis on the women in the military.

even ferret faced frank had qualities folks could relate to

Yeah. He was scared and he wanted to go home and he covered it with bluster. I think we can all relate to that.

He became a surgeon because he wanted to be rich and instead he found himself doing operations in a hut in the middle of nowhere....
0 Replies
2
Reply Sat 17 Mar, 2012 10:07 pm
I considered MASH to have been polemical. It certainly did not resemble a mobile army surgical hospital. Maj. Hoolihan could have been brought up on charges for her behavior, and she did not show the professionalism which i observed in army officers who were chiefs of nursing services at surgical and evacuation hospitals. Hawkeye would have been whipped out of there right quick, regardless of what skills he claimed to possess, and he'd have found himself at a battalion aid station just behind the lines. Klinger was too ridiculous for words. The one believable character was Col. Potter, although it was highly unlikely that a bird colonel would command a surgical hospital. I served in two surgical hospitals and an evacuation hospital. They were all commanded by majors, because the commander of a hospital has to be a surgeon. In all three cases, the executive officers and the chiefs of nursing services were Lt. Cols. Both by regulation and in practice, although those officers outranke the surgeon, they deferred to him, he was the boss. I knew of one incompetent doctor. He ordered a med-evac to take the dependent wife of an NCO to a battalion aid station, where she died. He was out of there so fast his head is probably still spinning more than 40 years later. Frank Burns would not have lasted a month.

My mother was a nurse in a field hospital in the Second World War, and landed at Normandy. She serve until 1945. I gave her the novel to read, and she was both unimpressed and didn't buy it for a minute. The television series was anti-war polemics. That doesn't mean much of course, it really was never intended to be anything else. It quickly became a vehicle for Alan Alda's ego, and i lost interest.

By the way, it didn't look like Korea, either. It was obviously southern California. The opening scene where the helicopters came into the hospital is the only part of the show that looked like Korea.
0 Replies
4
Reply Sat 17 Mar, 2012 10:20 pm
I don't think the show was ever intended to be textbook factual, since it was based on a movie of dark humor and outrageous premises. It was more Hogan's Heroes than Navy Log. I can't expect others to like it simply because I do, but it is in my top ten favorite shows.
1 Reply
1
Reply Sat 17 Mar, 2012 10:22 pm
This image is from the opening scene--that's what Korea looks like. It's really a rugged, and a beautiful country.

I don't think the authenticity of the location mattered all that much, really.
I think it was understood to be a comment on the insanity of war.
And as we were living through the Vietnam war at the time, naturally we saw it as a comment on that war.
1 Reply
1
Reply Mon 19 Mar, 2012 12:33 pm
M*A*S*H, the TV series premiered in 1972. It is less daring than it seems because by 1972 many Americans had started seeing Vietnam as a mistake. Television viewers related to the show as commentary on Vietnam and at that time the views of the TV show writers were compatible with the views of many Americans.
0 Replies
2
Reply Mon 19 Mar, 2012 12:37 pm
i'm waiting for the Abu Graihb (sp) sitcom, ala Hogan's Heroes, we could call it some thing like the 3 trillion Dollar Pyramid

perhaps a game show instead
0 Replies
1
Reply Mon 19 Mar, 2012 12:54 pm
@msolga,
I find it bemusing that people are focusing on the location. Just about nothing about MASH was authentic. It bore no realisitic portrayal of an army hospital in any war, and it's entire purpose was polemical. It isn't just that it didn't look like Korea, it wasn't even remotely like an army hospital, nor were the doctors and nurses as portrayed remotely like medical professionals. Were you OK with nurses being shown as sex kittens for the doctors? It took years for that message to sink in with the writers.
0 Replies
3
Reply Mon 19 Mar, 2012 03:24 pm
I don't insist on historical accuracy to be able to enjoy a show, if I did I wouldn't have anything to watch.

But I understand that they did have vets, field surgeons, working as advisers and just for kicks I looked up a picture:

and compared it to the MASH set: 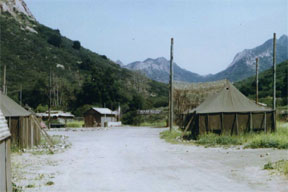 It looks like they did a pretty good job to me.

Sure the tide had turned against the Vietnam war by the time the show aired but there aren't many supporters of our two current wars and I don't think any network would have the nerve to air a show with similar themes right now.

And yeah, "China Beach" was a pretty good show. I'd forgotten all about it.
0 Replies