Forums: Politics, Fake Politics, U S-Politics, Us-Politics, Delusional-Democrat
Email this Topic • Print this Page
2
Reply Sat 12 Nov, 2011 04:45 pm
a construction job of this magnitude will also create a lot of spin off jobs, areas near the construction sites will see economic benefit while the construction lasts, and this may lead to jobs, but probably not permanent jobs, as the construction moves along the jobs will dry up
0 Replies
1
Reply Sat 12 Nov, 2011 05:13 pm
@gungasnake,
How dare the government listen to concerns of its citizens, when it could just be kowtowing to desires of the energy industry?
0 Replies
2
Reply Sun 13 Nov, 2011 05:57 am
@roger,
The Ogallala aquifer is a large area of sands and sandy carbonate rocks that act like a huge sponge. The infrequent rainfalls recharge this aquifer and it serves as the most important source of drinking water and agricultural water in the several states underwhich it lies. Usually these aquifers, in more rain rich areas, only recharge at a rate of like 20% of the rainfall . The ogalalla (and the Edwards just below it) suck up the sparse rainfalls and store the water as a big ass reservoir.

To build the pipeline right over this reserve sponge is about the stupidest possible route that could be chosen. I had no idea where their heads were. AND, to try to collectively defend the route by water engineers and hydrologists working for the contractors shows how scientific opinions can easily be bought even when their dead wrong someone with credentials and a licensewill support the plan.
This restores my beliefs that "IF IT ISNT FOR GOVT REGULATION< NOONE WOULD DO THE RIGHT THING" (I know Im a broken record on that point but this is an example)

Go to google an look up a map of the Ogallala and youll see the number of states it covers (from Nebraska to Texas). The sand hills of Nebraska serve as a big surface sponge that sucks up the rain and allows it entry into the aquifer. They also are an ecological treasure of their own, what with the dunes and pothole lakes and ponds
1 Reply
1
Reply Sun 13 Nov, 2011 09:42 am
Doesn't sound like formerman read much of the article...

Does it really take 18 months to find an optimal route or is that just putting the thing past the 12 election after which, if Obunga wins, he kills the thing altogether for his green friends? I mean, the P51 went from a drawing board to flying in 90 days.

...But the newest delay has noting to do with aquifers in Nebraska; rather it has to do with activists on the left who want no fossil energy development under any circumstances. Obama thinks that if he alienates these activists, that he can forget about reelection. He’s already alienated the right and center. The only place he has to go is to the left.

"The road to viability for the oil shale industry is reliant on a predictable regulatory structure and an environment in which companies can invest in research and development and create jobs," said Congressman Scott Tipton (R-CO), who has accused Obama of delaying the commercial extraction of shale oil by adding regulatory obstacles.

"The proper implementation of our environmental and safety regulations already on the books is a far better strategy than adding additional layers of bureaucracy to the process," said Tipton who held hearings on the subject in Colorado in the summer.

Earlier this summer the high priest of climate change, Nobel Prize winner, Al Gore blasted Obama for being timid on environmental matters, perhaps because he sensed a sell-out coming.

It will be a tough sell to the American people struggling under massive unemployment that the 400,000 jobs that could have been created by Keystone aren’t more important than the worries of environmentalists who think that a grouse has more value than a baby.

After all, the oil shipped through Keystone will replace oil that is being purchased from countries that don’t like us very much. And the project will add good paying, US jobs.

And this latest delay will undercut Obama’s demand that Congress pass his jobs bill “immediately,” a demand that started before the bill had even been written.

“The question, then, is, will Congress do something?" the president said at a press conference when he announced his jobs bull, but before he presented it to Congress.

"If Congress does something, then I can't run against a do-nothing Congress. If Congress does nothing, then it's not a matter of me running against them. I think the American people will run them out of town, because they are frustrated."

Obama still doesn’t understand the half of it.

It will be US Against Him until he’s out of office. ...

Irrelevant horseshit, but I assume you wanted to try to make a point.
Make a list of petro pipelines that have had breaks and leaks and have caused ground water contamination. (Hint, it only takes one leak to **** up several thousand acre feet of ground water). I hope you calm down enough to see the common sense of the delay(especially since ALL of the Nebraska lawmakers were against the route).

It was a bad idea to run it over the Ogalalla, no matter what your hysteria new services try to bullshit you with.

Congressman Scott Tipton (R-CO), who has accused Obama of delaying the commercial extraction of shale oil by adding regulatory obstacles.

I didn't realize Obama was President of Canada and could impose regulations there.

Or is this the typical RW scattershot attack with the hope some of it sticks.
0 Replies
1
Reply Mon 14 Nov, 2011 01:52 pm
Wiki shows the aquafer thus: 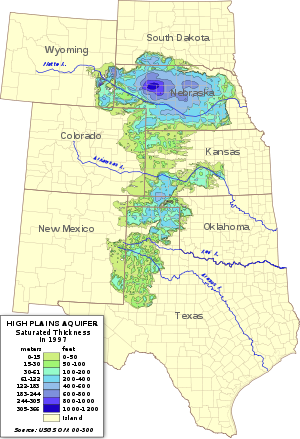 Want to avoid the aquafer with a pipeline? Simple since the aquafer itself is nearly East/West symmetrical: You flip a coin and run the pipeline east or west of the aquafer depending on which way the coin lands, I'm damned if I can think of a reason why that should take 18 ****ing months.

Unless of course your real aim is to stall for 18 months and then squash the project for the benefit of Gaea worshipers whose goal is to reduce the planet's human population to medieval levels for the glory of Gaea...
1 Reply
1
Reply Mon 14 Nov, 2011 03:35 pm
@gungasnake,
I think the objection lies in the permability of the surface. A much higher percentage of rain water enters the aquifier in sandy or gravely soils than other places. That's what I understand from Farmerman's answer, and I know that some streambeds leaving the Rockies lose an enormous percentage of their flow while replenishing the aquifier. Certainly, there are places along the Colorado River on the west slope that don't benefit at all from the river. The soils are simply too impermiable.

I would expect that hydrocarbons penetrate equally well.
1 Reply
2
Reply Mon 14 Nov, 2011 03:55 pm
@roger,
yepper. I dont think gunga understands that in a democracy the siting process is one of seeking agreements among private property owners, ag interests, water companies, transportation etc All must look at new routes that also have less environmental harms than the present route.

There are several projects for transporting LNG from the MArcellus play to the rest of the country. I expect those siting and row studies to take several years even though pipeline routes already exist via PAnhandle and Columbia gas. These will have to be stitched together in least harmful routes that dont cost an arm and a leg.
1 Reply
2
Reply Mon 14 Nov, 2011 03:59 pm
@farmerman,
I think I owe Gunga an apology. I completely misread his post and replied accordingly. Still, it wasn't a bad reply to what I thought he said.

One is that even if every new vehicle coming into service starting today were nuclear powered or didn't need power, we'd still have 30 years worth of vehicles on the road which need gasoline or diesel.

Two is that inaction is every bit as dangerous as anything else we could do. We are not buying oil from friends or good people in most cases; money sent abroad for oil has a way of coming back here in the form of aircraft flying into our tall buildings.
1 Reply
1
Reply Mon 14 Nov, 2011 06:54 pm
@gungasnake,
...none of which is an argument for contaminating our water supply.
0 Replies
0
Reply Tue 19 Feb, 2013 09:12 am

If Obama is serious about saving and creating jobs in this country
he needs to green light this Keystone pipeline RIGHT AWAY!
0 Replies