Do people's eyes really change color or does it just SEEM that way?

Forums: Science, Biology, Genetics, Curiosity, Eyes
Email this Topic • Print this Page
Reply Sun 9 Oct, 2011 05:34 pm
Me and my friend have been debating about this over the phone for awhile now.

I say- People's eyes DO change color. Mine changes slightly. Sometimes grayish, blueish, maybe gray-blue, sometimes slightly green. My cousin Ally has a strange but AMAZING mix of goldish, greenish, brownish eyes and they change colors all the time.

she say- Its only lighting or the colors that your wearing that make people eye color SEEM to change. She has brown eyes, they never change color.

If people's eye color DOES change then, WHY does it?

I've been told I have either hazel green yet sometimes they're hazel blue. Clearly part of it is light reflection (source of the light and environmental colors that get reflected off the eyes)

But there is more to eye color change then simple light reflection.

The genes involved in eye color determine how much pigment gets made, how quickly it is degraded and where in your iris to put it. In other words, eye color is an ongoing process that is not necessarily set in stone.

http://www.thetech.org/genetics/ask.php?id=30
2 Replies
3
Reply Sun 9 Oct, 2011 06:05 pm
@GracieGirl,
Sounds like we have the same color eyes! I've noticed mine look more gray when I'm alert and concentrating, but brighter and more blue or green when I'm tired. They get really colorful when I cry or when my allergies make them watery.
2 Replies
1
Reply Sun 9 Oct, 2011 06:37 pm
@tsarstepan,
They only change over time? You mean like in years?

So you dont think peoples eyes can change day to day or like hour to hour or something? I dont agree.

Oh! Nice avatar, What is it?

We have the same eye color because we're the AWESOMEST!

My eyes are bluer when I've been crying or when Im tired.
When Im calm, they're gray or grayish-blue.
I dont know exactly when they're greenish. Random times I guess?
0 Replies
1
Reply Sun 9 Oct, 2011 06:59 pm
@GracieGirl,
GracieGirl wrote:

They only change over time? You mean like in years?

So you dont think peoples eyes can change day to day or like hour to hour or something? I dont agree.

I'm not saying I don't believe in eyes that change in day to day scale. I just haven't seen it or noticed it happen. I just writing about what I know. I wonder if dietary and hormonal changes in a person can effect the eye coloring on a day to day scale. I don't believe in eye color changes as if the eye us some kind of mood ring where the eye color would change by the minute and second.

Oh! Nice avatar, What is it?

It's te
My avatar is the ghost dog named Zero from the Henry Selick claymation film, The Nightmare Before Christmas (1993).

1 Reply
1
Reply Sun 9 Oct, 2011 07:11 pm
@tsarstepan,
Oh! Well yeah, eyes arent mood rings but they are the windows to your soul, so that's gotta count for something right? My eye color definitely changes. Do you have dark eyes? I dont think dark eyes change as much as lighter eyes do because there's more pigment right?


Oh cool! Never seen the movie. I think I've heard of it though. I like the avatar.

0 Replies
2
Reply Mon 10 Oct, 2011 06:57 am
When I was younger, my eyes were a very light green. Sometimes they appeared brighter than other times. I don't think that counts as a color change.

Now that I'm old and feeble, my eyes are still green, but definitely darker.

BTW, my mother's eyes were hazel. They always looked the same to me. My father's eyes were light gray. Also didn't detect any changes.
0 Replies
3
Reply Mon 10 Oct, 2011 07:05 am
@GracieGirl,
My daughter's eyes change according to what she's wearing/ what colors are around her. If she's wearing green, she has bright-green eyes -- doesn't seem like they could be any other color. But if she's wearing gray, they're gray. They're sometimes more hazel. Sometimes a tiny bit blue.

If I look at them closely, they actually have a bunch of different colors within the iris -- they're not monochrome, at all. There isn't any actual green pigment but there are strands of bluish and goldish that next to each other, with the right background, look green.

Babies' eyes definitely change -- she was born with eyes that were a different color than they are now. But I don't think the intrinsic color changes on a short timescale, just how the color appears in context.
0 Replies
3
Reply Mon 10 Oct, 2011 08:38 am
@GracieGirl,
Eye color changes slowly over time, especially from birth to age 4 or 5, but it doesn't change in the short term or "over night".

However, remember that the color we see on any object (not just eyes) is not just an inherent property of that particular object or surface but also the ambient light surrounding the object.

So if a room is filled mostly with RED light, or mostly with BLUE light, people's eyes will reflect the light available to them correspondingly. Likewise, eye color in full sunlight versus interior incandescent or fluorescent light will appear different. And I suspect that the basic colors someone is wearing will affect eye color for the same reason (more of one color available for reflection), in addition to the way people interpret colors based on the other colors around them (a perspective effect related to the way our brains interpret signals, visual and otherwise).

Oooo. So that kinda explains how clothes and stuff can make your eyes a different color. Cool.


Yes. The color appears different because the environment (light) around them is different. This is especially true of lighter colored eyes which reflect more light. And it's also very pronounced in iridescent surfaces like birds feathers and butterfly wings.

For more information on iridescence see the following link: http://www.webexhibits.org/causesofcolor/15A.html

The other thing that can cause variation in eye color is the size of the pupil. Some eyes have more of one color near the center than at the edges, so as the pupil changes size the ratio of colors exposed changes. 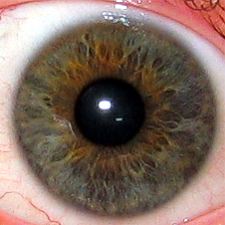 The other thing that can cause variation in eye color is the size of the pupil. Some eyes have more of one color near the center than at the edges, so as the pupil changes size the ratio of colors exposed changes.

0 Replies
1
Reply Fri 14 Oct, 2011 01:05 pm
@Eva,
Haha me too! i wish i was able to keep them really blue all the time without having to cry or be really tired lol
0 Replies
1
Reply Sat 19 May, 2012 11:25 pm
@GracieGirl,
F.Y.I., I don't know you people, but I'm going to answer anyways.
It can be from emotions or what your wearing. It can be from lighting sometimes, but either way, they do change. My eyes went from light blue, and I mean really really light blue, to a darker blue. Sometimes they would change back but currently they are a drab olive green. Basically they are the darkest green colored eyes you could ever have.
0 Replies