PEOPLE WHO SERVE A "HIGHER" CAUSE: YOU ARE HYPOCRITES FOR YOUR BELIEFS.

Perhaps the optimum solution to a problem might come from a prolonged debate among people with no fixed bias or opinion, and no desire to lead the way, but that's not how the world works.


You seem to be suggesting that fixed bias and opinions may be harmful to intellectual honesty, Is this correct? If so maybe we need to teach this as a fact and find other facts as well that are holding back social evolution but then again who am I to question how the world works?

I would think that science and logic may be able to find a better method or approach to our current condition if we at least acknowledge the problems and look for solutions.


I carry the flag for GREED (but not stinginess).
I encourage everyone else to do so also.

Liberal means: deviant, errant, inconsistent with something,
whatever it is that someone is liberal in reference TO.

The essence of liberalism is deviation from SOMETHING,
a partial rejection of something, inconsistent with its original meaning.
For instance, if a boy is sent by his mother to the store with a
shopping list of 10 items and he decides not to buy 3 of them,
he is being LIBERAL, as to that list, because he DEVIATED from it
by acting inconsistently with his mother's original meaning.
If he applies some of the money to the purchase of candy of his choice,
instead of his mother's choice of food, he is being liberal,
in distorting the original intendment of the shopping list.

When I spell fonetically, I am being LIBERAL as to paradigmatic spelling.
The innermost essence of liberalism is INCONSISTENCY with some designated criterion.

The Founders of this Republic were liberal to the extent
that thay DEVIATED from and rejected the Divine Right of English Kings.

Conservative means keeping rigidly unbending in the enforcement of a rule,
or law, or agreement or some paradigm; accordingly, conservatives conserve that rule
or agreement or criterion (e.g., a common style of dress, or style of art, or interpretation of a contract).

Liberal means deviating from some rule, or law,
or agreement or some paradigm, and not taking it too seriously.
A man is LIBERAL to the extent that he is deviant, errant, or inconsistent with some rule.

For instance,
if men are playing poker n one rakes in the pot
alleging that he has a flush, when he has 4 clubs and a spade,
and when challenged on this behavior, he declares
the liberal motto: " hay, that 's CLOSE ENUF; don 't be
too technical; don 't split hairs; just don t be a ball buster, OK ?
I had a fight with my cousin, yesterday I got a flat tire,
I belong to a minority group and my left foot stinks, so gimme a break n deal the cards."

Hence, he tacitly advocates the position that logic shoud be SUBORDINATED to emotion
and that thay shoud take a LIBERAL VU of the rules of poker because his sob story OUTRANKS
the technical rules requiring 5 cards of 1 suit for a flush. (Of course, he will be killed, when his fraud is discovered.)

Liberal = UNFAITHFUL to a concept or to an agreement.

Whether liberalism is good or bad
depends upon WHAT the liberal is veering away from.
Like when Boris Yeltsin veered away from communism, that was a GOOD thing.
When Deputy Fuhrer Rudolf Hess flew to Scotland in 1941, he was a liberal Nazi,
because he was deviating from Hitler’s war policy.

Liberalism includes ANY kind of deviation,
in any direction of 360 degrees of arc + up n down.

There is no logical semantic constriction on liberalism
that it can only exist in the direction of collectivist-authoritarianism a/k/a socialism.
Liberalism can be in the opposite direction or in any direction,
so long as it is deviant.

Barry Goldwater was a conservative BECAUSE his philosophy did NOT deviate
from the pro-freedom philosophy of the Founders of this Republic as set forth in the Constitution.

Barry Goldwater was a conservative BECAUSE his philosophy was rigidly faithful
to the US Constitution (which is the criterion).

Is there such a creature as that?

I prefer this as the definition of liberal! {Favorable to progress or reform, as in political or religious affairs.}

I prefer this as the definition of conservative! {One who prevents injury, decay, waste, or loss one who manages (natural resources) wisely; preserve; save: Conserve the woodlands and so forth}

now what do you think about liberal conservatives?

Is there such a creature as that?

I prefer this as the definition of liberal!
{Favorable to progress or reform, as in political or religious affairs.}

As I have already indicated, PROGRESS can be in ANY direction,
in 36O degrees of arc, plus 36O degress of arc up and down.
Was it "progress" as time went on thru the Weimar Republic
approaching the 3rd Reich????? progressing closer n closer to it????

I prefer this as the definition of conservative! {One who prevents injury, decay, waste, or loss one who manages (natural resources) wisely; preserve; save: Conserve the woodlands and so forth}

Both in the physical world
and in the world of abstract ideas, there r trillions of things
that can be either deviated from, or conserved; it not just limited
to "woodlands". Any number of criteria can be DEVIATED from (liberal)
be thay protection of "woodlands" or deviation from
philosophies of painting or of poetry.
EITHER there IS deviation
OR
there is NO deviation.

Liberal means DEVIANT or inconsistent with something. 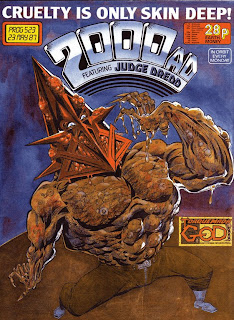 0 Replies
1
Reply Wed 31 Aug, 2011 12:24 pm
@OmSigDAVID,
I see things very different than most people. I am no absolutist, I have an open mind and I enjoy learning new information that can change my understanding of reality!

The way I see it is that we are not all gooey nor prickly but rather "prickly gooey" and most things are a shade of grey!

Two great videos that show what I mean! The first is reality mixed with entertainment humor the second much closer to the truth!

...why should n´t I believe my experience on reality is being my real experience of reality ?


I do not recall disagreeing with that. I do think that your experience is your real experience of reality even though it may not be a reality that everyone else can call reality!

What I do say is to have an open mind to that fact that some of your understandings about what you think to be true may change by adding knew facts to your current understanding!
1 Reply
2
Reply Wed 31 Aug, 2011 03:37 pm
@reasoning logic,
I have no quarrel with that...although I am very aware that only I can eventually fully answer the meaning asked for in my questions...

...nevertheless whatever justify´s me and my ability to partially endorse to someone else what I think ends up justifying them...relative measurement is measurement nonetheless ! Such measurement ability needs itself resolving !
0 Replies
0
Reply Sat 24 Mar, 2012 04:34 pm
@Fil Albuquerque,
Whatever cause one may regard as to be a higher cause, they must regard it, I think, as higher than themeselves; otherwise, their words will be more liable to differ from their deeds. i.e. one may say they are serving a higher cause when what they do is completely different. This is why we must not deny any contradictions that arise in us when we say we are serving a higher cause like believing in God, for instance. All we can do is strive to have that ability to refelct our core beliefs in our acts.
0 Replies
1
Reply Sat 24 Mar, 2012 04:46 pm
@reasoning logic,
reasoning logic wrote:

I try to find people that seem to be open minded and follow them and their followers and their favorite videos on youtube and other sources and see where it leads me. You will never run out of videos to watch by doing so!

And you'll never have to read a book ever again.

People do not want to believe it but paper backs and hard backs will one day be a thing of the past, just like the turn table, 8 track tapes and so on. but even so many of us old timers will not let some things die, that is why Elvis still lives.

You Live Inside Technology

Great reply now what do you think about liberal conservatives? Is there such a creature as that? I prefer this as the definition of liberal! {Favorable to progress or reform, as in political or religious affairs.} I prefer this as the definition of conservative! {One who prevents injury, decay, waste, or loss one who manages (natural resources) wisely; preserve; save: Conserve the woodlands and so forth}

wouldn't though a liberal - conservative be a more balanced individual ?

conservative where need be and liberal , freedom where it should be
0 Replies