A QUESTION ABOUT QUESTIONABLE ADVERTISING

Forums: Advertising, Product, Effective, Sexy Models
Email this Topic • Print this Page
Reply Fri 12 Aug, 2011 03:19 am
There is an ad i've been seeing online about "real estate talent," which shows a picture of a young woman (smiling of course) with a bust that could double as a book shelf (she must be wearing the super strength industrial brassière). So, this brings up several questions for me.

Is advertising of any kind effective with you? (Despite what Terry O'Reilly on The Age of Persuasion says--and as an advertising copy writer, he would say this--advertising is not effective with me, unless you count being so offended that i turn off the television or radio.)

Is this kind of advertising (pretty young women with prominent boobies) effective with you?

For the wimmins--does advertising of this kind offend you?

Hey, Irish. Having done advertising for both radio and TV for many years, I find that anything that detracts from the PRODUCT being touted is poor whether it be a handsome dude or a provocative lady.

So I dislike any kind of distraction that takes away from that. I don't like the "in your face" or the subtle.

0 Replies
1
Reply Fri 12 Aug, 2011 08:19 am
@Setanta,
My dad always said that the purpose of any advertising was to inform, entertain or offend and that you should look at every ad with that in mind. If an ad makes you look long enough to find out what they're selling then the advertiser has done their job well.

Your post reminded me of an ad I'd seen discussed on copyranter a little while ago: 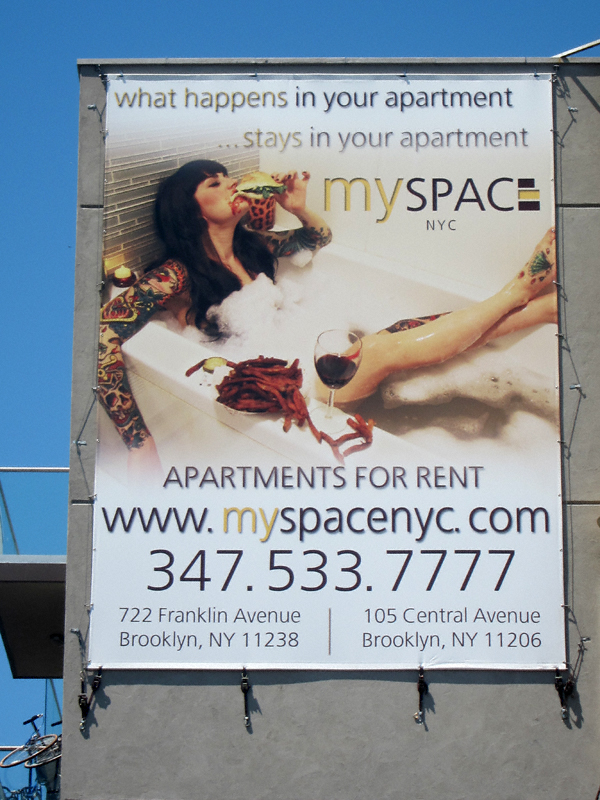 The fact that I remember it tells me it was probably a pretty effective ad.

I'm not really offended by busty babes appearing in an ad any more than I am by anorexic, airbrushed 20 year olds being used to sell me moisturizers.
2 Replies
1
Reply Fri 12 Aug, 2011 09:31 am
@Setanta,
I'd imagine this kind of advertising would be effective if they were selling sex....

I'd also imagine depending what you are trying to sell and who your target audience was. For example on the Spike channel, I'd imagine this would be effective for their target audience - whereas on PBS kids - not so much.
0 Replies
1
Reply Fri 12 Aug, 2011 09:31 am
@Setanta,
And depending on what they are trying to sell - it would turn me off their product.
0 Replies
1
Reply Fri 12 Aug, 2011 09:33 am
@boomerang,
Whats with the eating of that huge sandwich?

That's not sexy - funny though
1 Reply
1
Reply Fri 12 Aug, 2011 09:34 am
I was interested in commercials as a kid, and not just because my father worked in that field for a while. I toyed with it as a possibility for what I might do when I grew up. Then I read the Hidden Pursuaders, by Vance Packard. Don't remember it much, except that it turned me off of it being a worthy sort of career. Such an idealist then.. Now I'm not as blanket against it as a career that has a useful component - am more selective about what I find obnoxious.

In the meantime, even when I was most against advertising, I still liked commercials that seemed clever to me, and still do now. Not sure that has ever made me buy - say, Marlboros, because of the herding cats commercial, or a VW, because of a certain old ad.

The commercial that still comes to mind as the most obnoxious for me was one that kept repeating, over and over, Anacin! Anacin! Fast fast fast relief! Loathsome. But, it must have worked to make the pill name stick in people's minds in the drugstore aisle.

Have I bought things because of ads? Probably, re name recognition, but I'm not sure how much since I've tended to buy from hearing or reading opinions by those in the know/reviews - Bang and Olufsen when I got a turntable, Sony when I wanted a tv, Toyota when I wanted a car that worked, back then. Food purchases - all based on my own developing tastes. Restaurants to go to? All based on reviews and checking them out. Movies? not from ads but from my own knowing about who was director (etc), type of movie, often but not always from reviews. Ms. Picky.

Never would I choose a real estate agent because of a smiling bookshelf ad - I'd tend to doubt the professionalism of the firm.. besides that the looks of an agent aren't high on my criteria.
0 Replies
1
Reply Fri 12 Aug, 2011 09:36 am
@Setanta,
This was an ad for how roomy the new Ford Focus is, and how many people can comfortably fit inside. SO whats yer point?

BBB
0 Replies
1
Reply Fri 12 Aug, 2011 10:42 am
Not everyone realizes that advertising agencies actually employ psychologists, sociologists and social anthropologists to help them analyze how to persuade a consumer to buy something. Studies are carried out to evaluate the effectiveness of various gimmicks to promote a product.
3 Replies
1
Reply Fri 12 Aug, 2011 11:07 am
@wandeljw,
Correct. It's easy to claim that one is not influenced by advertising, but that is "top of mind" thinking. Advertising frequently does not aim for top of mind recognition. Whether one realizes its impact or approves of the message, an impact is nevertheless made. Sales statistics provide the proof.

A good friend of mine who owned a chain of Mexican restaurants put it this way once. This is one of the most pragmatic explanations I've heard.

"I've worked with all the best agencies in the region, and I've heard all the reasonings for why advertising works, and I still don't know how much of it is smoke and mirrors. But what I do know is this. On any given Saturday night there will be a group of people sitting around, and someone is going to say, 'Let's go eat Mexican!' And if I haven't been advertising, it's my competitor's name that's going to pop into their minds. I want them to think of my restaurants first."
2 Replies
1
Reply Fri 12 Aug, 2011 12:03 pm
@Eva,
Of course, it depends on the market, Eva. If we're talking Madison Ave. that's another thing. Mine were mostly for local folks and politicians.
0 Replies
1
Reply Fri 12 Aug, 2011 12:10 pm
@Eva,
So when i turn off the radio or the teevee within two or three seconds, how far into my "bottom" mind have they gotten? I can assure you that although ads may appeal to most people, i am not only one i know who doesn't pay them any attention, nor buy their products. The last time i was motivated in that manner was the other night when out walking the little doggies, and we stopped by a neighbor's house . . . just after he had had a pizza delivered, you could smell it . . . that ad worked.
1 Reply
1
Reply Fri 12 Aug, 2011 12:12 pm
By the way, the experts which ad agencies employ, and the agencies in dealing with their customers are never going to suggest either that they are not offering effective services, nor that they don't know if it will work or not. Sure they say it works, and sure they bring out all the bells and whistles to suggest that it's an expert opinion.
1 Reply