can isiah thomas and LARRY BROWN save the knicks?

Forums: Basketball, Nba, Knicks, Sports, Playoffs
Email this Topic • Print this Page
1
Reply Sun 17 Dec, 2006 11:40 pm
I don't think the Knicks have been anything but hideously dull in my entire lifetime. Even when they were "good" they were a plodding, unimaginative team featuring little more than Patrick Ewing's lurching three-step moves across the lane and John Starks' pout. But Thomas sure has put a particularly noxious brand of suck on the floor in the MSG.

Couldn't be more right about Starbury. The guy's got a gift for losing, as NJ and then Phoenix figured out.

But maybe the Knicks are on to something, and when they unload him they'll become contenders, too. If I'm an NBA point guard, I'm salivating to get traded for Starbury. Look what it did for Kidd and Nash...
0 Replies
1
Reply Mon 18 Dec, 2006 11:19 am
< nodding in agreement >

basketbrawlin' is the only way they get on the front page these days...
0 Replies
1
Reply Mon 18 Dec, 2006 11:46 am
Well, there goes a page of the most insightful discussion on professional basketball ever to be posted on the internet.

I don't think the Knicks have been anything but hideously dull in my entire lifetime. Even when they were "good" they were a plodding, unimaginative team featuring little more than Patrick Ewing's lurching three-step moves across the lane and John Starks' pout.

I'd agree with this, but there was that one season, back in '99, when they came in the playoffs as the lowest seed and made that highly unlikely and very exciting run to the finals. Remember Larry Johnson? Oakley? Sprewell? That was a fun team to watch.

Then they went and made that stupid big money, multi-year deal to keep the ultimate in mediocrity, Allan Houston. The ship has been sinking fast ever since.

I'd rather watch the '86 Nuggets or the '88 Warriors than the '99 Knicks any day.
0 Replies
1
Reply Mon 18 Dec, 2006 12:40 pm
I thought they were very exciting that year. I remember the controversy over their offense that year, because with Sprewell they actually became a fun, push-it-up-the-court kind of team while Ewing was hurt. Suddenly Ewing's style of play, which was a lot like the indian in One Flew Over The Cuckoo's Next (stand near the basket and be big), didn't seem to fit with their new speedier look. Unless I'm misremembering it.

Maybe the season wasn't completely enthralling, but that playoff run was definitely exciting.

But they suck now, so I guess I'm just wasting my time trying to relive the few old exciting glory days that they had. 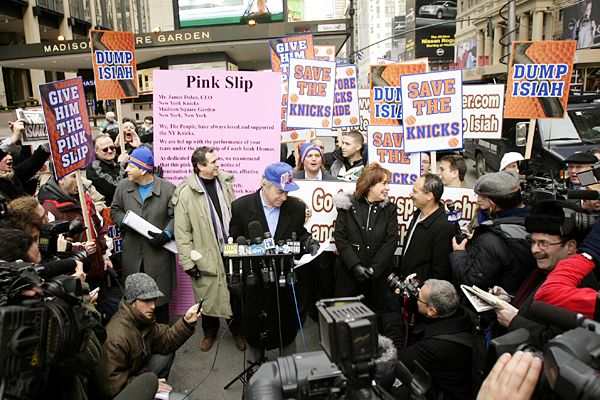 0 Replies
1
Reply Wed 19 Dec, 2007 09:26 pm
Ha! The Garden certainly is a pretty wild place lately. I have been watching this story all day. Did you hear about the guy who got kicked out last night for holding up a "Fire Isiah" sign?

In response, the Daily News had a full page with only the words "FIRE ISIAH" in big block letters that you could cut out and bring to the game tonight as a sign.

I read that Isiah wants two more weeks to see if he can turn the team around. I can't believe they haven't fired him yet. What the hell is holding them back? He's had four years. They've sucked all four years. Four years! It's not just now that they suck. It's been four f*cking years!!! What the hell is the holdup! Get this bum the f*ck outta here! And take that other bum Stephon with ya, ZEKE!
0 Replies
1
Reply Wed 19 Dec, 2007 09:27 pm
Who's gonna take that job.....
0 Replies
1
Reply Wed 19 Dec, 2007 09:33 pm
Jerry Colangelo has been mentioned as a possibility. That might be interesting. Anyone but Isiah.

Damn, Child of the Light pegged it right from the beginning.

Nope, Isiah was a great player, average coach, and I expect him to be a bad GM. He makes deals expecting players to have the will, and drive that he played with, but alot of players are just lazy.

And the reason "Starbury" gets traded so often is because he is a cancer in the locker room. Most sports fans understand that the game is 20 or so percent talent and 80 percent Chemistry.

Kidd is better than Starbury, but not 30 wins better.

the Daily News had a full page with only the words "FIRE ISIAH" in big block letters that you could cut out and bring to the game tonight as a sign.

so much for impartial journalism...

NEW YORK - Before engaging in more serious talks with the Knicks, Indiana Pacers CEO Donnie Walsh has set up a meeting with Indiana owner Herb Simon early next week, according to a source who has spoken to Walsh.

In the last year of his contract, Walsh wants to sever ties with the Pacers or renew his pact. Most likely, the source said, Walsh wants to be relieved of his Pacers' duties after the meeting. Walsh would feel more comfortable when talking to other teams if cut loose.

If things move swiftly between Walsh and the Knicks, Isiah Thomas could be out before the end of this season.

Walsh and owner James Dolan were on the verge of an interview in the coming days, but it apparently will be postponed until after the Simon meeting. The Bucks' general manager job is open with the firing of Larry Harris. Walsh said he hasn't spoken to Milwaukee, but apparently has interest in the position.

Thomas did not dispute reports Dolan is interested in Walsh, but he also would not comment on them.

Thomas also said, "I'm very comfortable with where I am with Jim." But when asked directly if he will be the team's coach/president next year, Thomas' truer feelings emerged as he paused several seconds.