Forums: Tsunami, Earthquake, Japan, Nuclear Power Generation, Pacific Ocean
Email this Topic • Print this Page
1
Reply Thu 17 Mar, 2011 05:04 am
@hawkeye10,
WHen I worked at several US plants , GE and MArtin MArietta had developed a series of robots that they called "T rex" and these were connected by some of the neatest tv screening Id ever seen. That was back in the mid 90's so I assume that there are ample robots out there for many of these tasks.

1 Reply
1
Reply Thu 17 Mar, 2011 05:10 am
so its fine to expose robots to the danger of nuclear products but not their creators, didn't anyone see the matrix, it's exactly that kind of **** that's gonna make the robots rise up against us
0 Replies
2
Reply Thu 17 Mar, 2011 05:10 am
@cicerone imposter,
Everyone in the nuke industry has a habit of "Circling the wagons" with many of their reports . I recall the search for the "proper" word todescribe the situation at Three Mile ISland. Im sure thats going on here.

My constant theory has always been that (almost any)INDUSTRY, if left to its own devices and given breaks in regulation, will NOT do the right thing by us.

1 Reply
1
Reply Thu 17 Mar, 2011 06:17 am
@farmerman,
Except this industry's downside (when pharquing up) will leave us, the land and the water like so many Cheetos.
0 Replies
1
Reply Thu 17 Mar, 2011 07:25 am
@farmerman,
The wind has shifted from S S/W to N N/E (towards Tokyo). This is a map with beta and gamma radiation readings on the ground; units are nGy/h (nanoGray per hour). In prefectures colored purple on map readings are "censored" as per source, TargetMaps; they don't say by whom. Highest reading shown is 4,000 nGy/h (=0.4 mRem/h, Fukushima, in red); rounding up, say half a millirem per hour. Federal max limit are set at 5 rem/year which is equivalent to 10,000 cross-country flights. Either the measurements are wrong or there's no danger in Tokyo now - or there's an error in unit conversions: 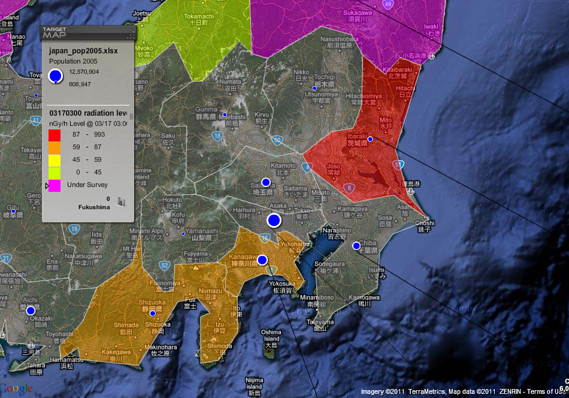 Either the measurements are wrong or there's no danger in Tokyo now - or there's an error in unit conversions:

Please help us out, if you suspect it's in error, why post it? This level of arcane and esoteric detail is over 99% of our heads and it's unclear how it helps us shed light on the current situation.

Truly, I'm not trying to be a devil's advocate. I'm just trying to make sense of this dire emergency.
1 Reply
1
Reply Thu 17 Mar, 2011 08:42 am
@Ragman,
1. I worked out the conversions myself from the radiation units posted on the map readings because most people are familiar with millirems (or at least can grasp the level of radiation involved in a cross-country flight) whereas the original radiation units appear, as you say, arcane to most.
2. Next: the radiation readings: my source is linked. I've no immediate way of double-checking the accuracy of their readings but it's the only publicly available source right now and generally considered reliable. So, finally,
3. Unless I made some drastic error under (1) above (and obviously I double-checked before posting) and/or there's something wrong with the readings (see 2 above), the warnings for residents of Tokyo to move westwards make no sense. If that's not clear please come back and tell me why you think so.
1 Reply
1
Reply Thu 17 Mar, 2011 08:50 am
@High Seas,
Thanks for acknowledging and your sincere interest in this serious matter that deeply affects the whole world. I understand that you have a scientific background and I respect that.

However, you're into a far more of a micro-level of detail, which is fine for you. My need for priority info is different.

However, my problem is that I find that info is inconclusive to me as to what it means in the grand scheme of things. If those people in Tokyo are not threatened today, they may be threatened tomorrow if the wind blows the right way. I feel that it's only a matter of time as this situation is still worsening. That is the priority (in my mind) for the info that I REALLY want to know.

... If those people in Tokyo are not threatened today, they may be threatened tomorrow if the wind blows the right way...


Nobody knows what will happen tomorrow - problem at Fukushima is there's such contradictory information about what's happening there today. At least some things are known to be impossible, such as a Chernobyl-type explosion; but radiation can unfortunately get much worse.

And the wind has already shifted toward Tokyo. There's no way to evacuate 36 million people so they have to stay put; but there are efforts to mitigate the effects of additional radiation - IFF (if and only if) it does get to that - by distributing potassium iodide to populations, telling them to stay indoors, and at least moving the most vulnerable (pregnant women, small children etc) out of town.

So, the key is: will things at Daiichi get worse? All I can give you is probabilities: if pressures / temperatures can be brought down and kept down (see my note to Farmerman) for the next several days then the answer is NO. That's the maximum probability.

After that's done they can clean up any loose radioactive pellets before they seep into the groundwater, clean up with robots the whole plant, and then cover the damn thing up with boron-loaded concrete. What radiation has already leaked into the atmosphere will stay out there.

But then there's a small residual probability, which is what you're asking: might things not work out? They might. But that probabilityevaluated at this time is too small to justify panic anywhere outside Fukushima prefecture in Japan and certainly too small to justify a run on potassium iodide in the West Coast. If someone out there has perfect information on the exact status of Daiichi, he can come up with a better quantification of probabilities than "very large" v. "very small". I don't have that information. If you want the gory details of what that very small probability involves, I can do that...
1 Reply
1
Reply Thu 17 Mar, 2011 09:27 am
@Ragman,
Not the giant radiation-shielded robots you'd need to send into reactors and spent fuel pools. And you'd need to connect all their sensors to monitors accessible from a safe location - more wiring, more installations, more electricity, more work when there's more urgent stuff to be done in that plant.
0 Replies
1
Reply Thu 17 Mar, 2011 10:12 am
@High Seas,
The contradictory information coming out of Japan is similar to PG&E in California. They've been lying to regulators and the people, because they didn't want to reveal there were leaks, and to save money.

Greed will do it every time.

The California PUC has asked PG&E for documents on their gas lines, and PG&E claims they are lost.

The PUC will fine PG&E $1 million a day for that delay.

0 Replies
1
Reply Thu 17 Mar, 2011 10:20 am
When the reports come up on TV about the disaster, inevitably you see many folks walking around with those little white masks on their face.

I can't see that doing any good whatsoever. False sense of security?
2 Replies
1
Reply Thu 17 Mar, 2011 10:22 am
@Reyn,
Yes. It similar to people outside of Japan buying iodine pills.
1 Reply
1
Reply Thu 17 Mar, 2011 10:33 am
@cicerone imposter,
Agreed.
0 Replies
1
Reply Thu 17 Mar, 2011 10:34 am
@High Seas,
I mentioned the B-crete after flooding. but I was recalling that the siting issue was where the first crack in the armor occured. Buildinng a cofferdamn for silicaborate water, using autonomic ,as well as guided and tasked robots is certainly within the possibility of TODAY. DOE used MArtin MAriettas own robots at Fernald and Miami Ohio as well as PEducah (maybe rap rap will respond, as he was <I believe, directly involved).
T rex was avilable in several track connfigurations with blades, graders, grapplers etc. They could fuel themselves by connecting to diesel.

Were all just blowing smoke cause we dont know what will be attempted(they are making this up as they go along).However there is an example of incompetence that has reared its head in the nuke industry yet again.
1 Reply
1
Reply Thu 17 Mar, 2011 10:39 am
@Reyn,
Quote:

When the reports come up on TV about the disaster, inevitably you see many folks walking around with those little white masks on their face.

I also wondered why so many people seem to be wearing surgical masks. It seems it has nothing to do with the earthquake, or the radiation fears, it is something that is simply done more often in Japan for other health reasons--and it is flu season.

The Japanese wear facemasks to protect themselves from pollen and from the flu, and also to avoid passing on germs. http://www.curiosite.com/scripts/news/ennews.php?frmIdPagina=10163