As you read through this feature, drag the scroller in the middle of the photo back and forth to see how some of Boston's landmarks and neighborhoods have -- or haven't -- changed.

as close to the same view as i could get from google maps, circa 2009
(yeah, i've been meaning to walk outside and snap a photo...)

0 Replies
2
Reply Wed 26 Jan, 2011 06:05 am
@Region Philbis,
Oh I love it.
0 Replies
2
Reply Wed 26 Jan, 2011 06:32 am
Same house, same porch, no shutters, no awnings, vinyl or aluminum siding replacing shingles, no little girl in a pinafore, paved street. Some change, some the same. How're the interior details? Any 60's--get rid of all the great interior trim renovations? Show's how much of Boston's housing stock is at least a century old, and that the "if it's old it should be painted white even if it wasn't originally": school still has its adherents.
1 Reply
2
Reply Wed 26 Jan, 2011 07:11 am
I'm generally a modernist, but I love our old buildings, the art deco overlying the Victorian overlying the Federal overlying the Colonial. Not sure about our modern stuff tho--the Strata Center at MIT? Leaky, hard to use. Corbusier's Carpenter Center at Harvard--dark and dank. Boston City Hall, dark, brutal, windswept and harsh. A major city with so much still at a human scale is great (but you look at some of those slides, and see all the huge buildings that have risen in the background of the familiar iconic buildings in the foreground over the last half century).
1 Reply
2
Reply Wed 26 Jan, 2011 08:07 am
@MontereyJack,
Sometimes the mix can be interesting -- like Trinity Church reflected in the
Hancock Building.

0 Replies
2
Reply Wed 26 Jan, 2011 05:01 pm
@MontereyJack,
It's the same way all over Massachusetts. In the small towns where most of my relatives live, there are sections with buildings from the 1800's, mostly painted white.

The West Hanover three-bedroom two-story house my dad and his four brothers and a sister were born in at the turn of the century is still standing, and still owned and occupied by his sister and her family. She's almost as old as that tiny house and has lived there all her life. The house hasn't changed much in all those years.

Most of the houses in the surrounding streets are just as old and are also still occupied by members of the same original families. About the only thing that has changed is that they now have double-paned windows and better insulation in the walls. The kitchen wallpaper in my aunt's house is probably from the late 50's early 60's and she still gives it a good scrubbing every spring.
0 Replies
1
Reply Wed 4 Dec, 2019 11:17 am 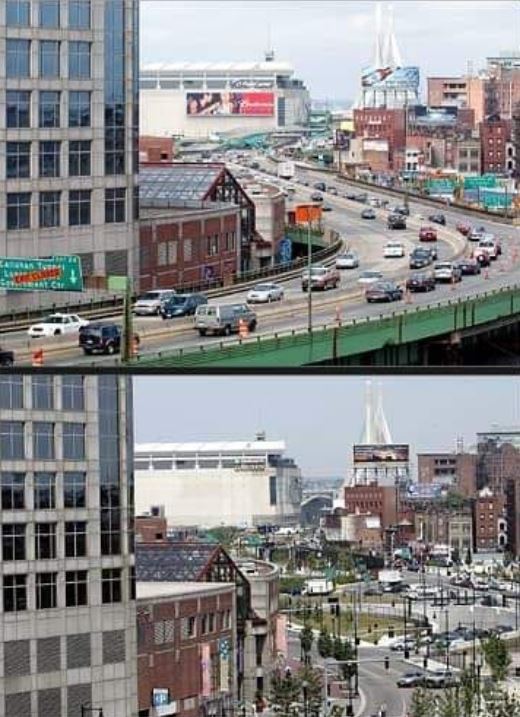 before and after the Big Dig...
0 Replies