What are you talking about? That kid saved a goal, twice in one play! Nice work!

ust sexual rejection, isolationosm, loneliness paranoia and some other stuff I'm too tired to research bur someyhimg to do with 1.3 shootings per week since sandy hook. 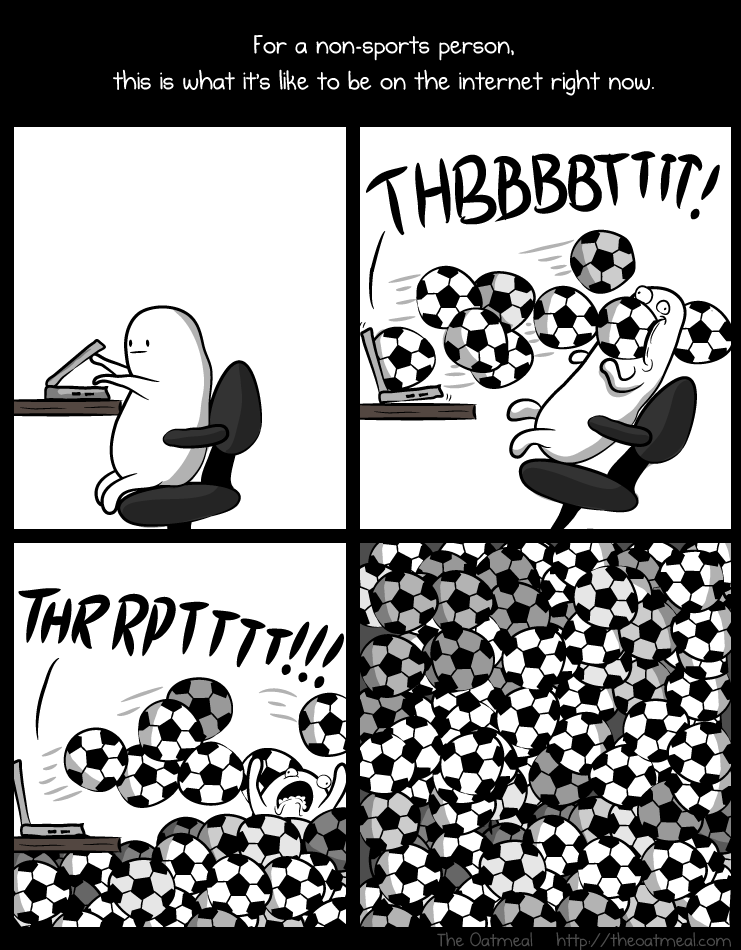 Firstly, imagine every time within a day that football is mentioned by someone else. Secondly, replace it with something that you don't want to hear about every day. Say... Archaeology. Then, think carefully about how an average day would pan out.

So, you awaken to the clock radio. It's 7AM. Just as you awaken, it's time for the news and archaeology already. Not news and other historical investigations, like library restorations or museum openings (unless there's another event happening), but just the news and archaelogy. Malaysian plane is still missing. Pistorius is still on trial. New dig announced in Giza. Ancient Mayan temple discovered. Exciting stuff.

Time for a bite to eat over the morning TV. More news. More archaeology. Yes, you are aware of what is up with the missing plane. Fine. Now the archaeology in video format. Video of people dusting off some skulls and bits of pottery. All well and good, but archaeology isn't your thing. It would be nice to hear about something else.

Even when it isn't archaeology season, the media follow noted archaeologists. They drive fast cars, date beautiful women, advertise fragrances, and sometimes they go to nightclubs and act in the worst possible way. Scandals erupt as the tabloids follow these new celebrities when they're not searching the past for answers. It is entirely possible you can recite the names of certain researchers, even if you don't pay attention to archaeology. You don't know what transfer season is, but you know that someone was transferred to a dig in Peru for a sum of money that could fund the London Underground for two whole days.
http://www.tickld.com/x/how-football-sounds-to-people-that-just-dont-care-T 0 Replies
3
Reply Tue 17 Jun, 2014 03:44 pm
As I've made clear, I'm not a soccer fan, but I caught a bit of Brazil v Mexico this morning. The speed at which the Brazilians play the game is pretty impressive.
1 Reply
2
Reply Wed 18 Jun, 2014 06:32 am
@Wilso,
..and the skill of Mexico's goalkeeper is too.
1 Reply
1
Reply Wed 18 Jun, 2014 07:36 am
I used to like football in the past, I even had a trial for Leicester City FC in 1969 and hit the back of the net twice in our 4-2 victory over the other triallist team, then I went home to await the expected sign-up papers. I'm still waiting..
Nowadays I find football boring and don't watch it, I especially don't like the way it's been turned into a religion, where everybody thinks grown men kicking a ball around is of deep cosmic importance..

PS- I like watching cycling on TV especially big races like the Tour de France, it can be boring at times but the scenery is wonderful..

..and the skill of Mexico's goalkeeper is too.