Dispatches from the Startup Front

So, can I bring my light saber on an airplane?
1 Reply
1
Reply Fri 16 Jul, 2010 04:23 am
@jespah,
My life is somewhat turned upside down right now as we are preparing for TEDxBoston ....
1 Reply
1
Reply Mon 26 Jul, 2010 01:27 pm
@jespah,
The big event is tomorrow and I am doing my best to keep my head straight. Fortunately I have a lot of things written down. although I fear that for tomorrow it might be a good idea for me to write down things like - put on shoes after putting on hose.

I am babbling and nutty. I have probably been driving RP up a tree.

It's a blast although I would like for RP to come out of the tree as dinner is not served up there.

Samwise gave a good talk - he's a great speaker. He's getting his PhD so he's done defenses and whatnot and knows how to play to a crowd and how to answer questions on his feet. This was good as we were having demos afterward and were unsure what kinds of questions would come up. This helped the rest of us (mainly, me, as I dunno so much and would have floundered with most questions) tremendously.

Frodo introduced Samwise, then went back to fixing up demos with Merry and Pippin. This was one of those things where everything was fixed one second before people came in the door.

I am still very tired, will get breakfast and probably head back to bed for a while before getting up and starting to write thank-you notes and the blog.

I am continuing to have an amazing time but my Spring chickenness is waning.
1 Reply
1
Reply Wed 28 Jul, 2010 03:07 pm
Glad to hear that things went well. Spring-chickenness wanes. Nuttin' you can do about it.
0 Replies
1
Reply Wed 28 Jul, 2010 04:09 pm
@jespah,
Sympathy from me... I used to get dead feet from just attending landscape expos - hours walking around or standing on concrete, aaaak. I worked a medical expo once, that was harder, what with trying to give bright and shiny answers to all questions.
1 Reply
1
Reply Thu 29 Jul, 2010 03:57 am
@ossobuco,
Today we have the TED main event. We don't present, but it's a great networking opportunity. Fortunately, I'm in far lower shoes.
1 Reply
1
Reply Thu 29 Jul, 2010 02:22 pm
@jespah,
Wise decision about the shoes. Back in the day when I had to work exhibits at conventions, I put aside snappy shoes and found a pair of low heels that looked decent and felt good. Gotta be nice to them tootsies--or they won't be nice to you.
1 Reply
1
Reply Fri 30 Jul, 2010 05:53 am
@Roberta,
Sleepy sleepy sleepy I have got a lot of blogging and thanking to do. Must focus on that.
1 Reply
1
Reply Wed 18 Aug, 2010 10:29 am
@jespah,
Moving on to another event, and another one after that.

Note to self: when there are 2 events right on the heels of each other, promoting the first one inevitably turns into promoting for the second. And that goes double when the second one requires voting.

Popularity contests are not fun, but they're what happens. And we're doing okay with our voting. But -- shniff -- I want my baby to be popular.

I am at an event (it has not started quite yet). And I have a cold. And my throat feels icky. But -- such fun! -- I am also getting not so much reflux as just, ugh, my belly is rebelling.

Plus I did a boatload of driving. The event is in Providence, which is about an hour away from Boston, but, you see, it isn't when you detour.

I am so tired.

It was 13 hours yesterday. About 2 1/2 - 3 of those were spent driving. I walked 10,000 steps (just over 4 miles). Helfino how. It was a lot of grab this, move that. I was the Candy Lady, kept stuffing candy into baskets next to our stuff. There was also a water cooler -- a hugely great last-minute idea. Both of those brought people over, as did the hexapod.

The hexapod, it, er, looks like something out of The Terminator.

This one is not ours, although it is similar. Ours had the gizmo we are selling in the center, instead of whatever is in the middle of this one. But the legs are pretty close. 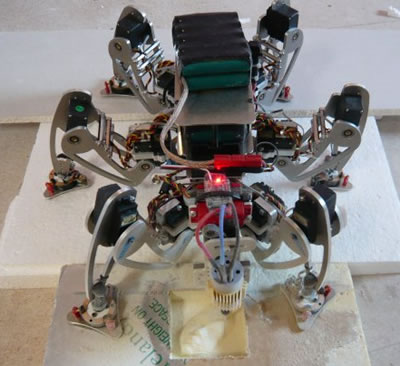 It is weird when it walks. It's slow and awkward but, man. It is still somewhat nightmarish.

I am exhausted. At least I was wearing comfy shoes. That was a bonus. But the cold I was getting? Oh, it is full-blown now.

I will sleep until, perhaps, Thursday.
1 Reply
1
Reply Sun 29 Aug, 2010 09:14 am
@jespah,
Sympathies about the cold and about your being on your feet all day(glad you wore comfortable shoes this time). Rest at least until Thursday.

Bringing back memories of my working exhibits at the conventions. The hardest part for me was being nice all day.

I hope your hard work yielded some results.
1 Reply
1
Reply Sun 29 Aug, 2010 03:00 pm
@Roberta,
Thanks. Well, 20 more names for the mailing list. But I'd like to see these mailing list names converting to sales at some point.
1 Reply
1
Reply Wed 15 Sep, 2010 05:53 am
@jespah,
Tonight we have a big event; it's called Mass Innovation (Mass Inno). We're getting a 5-minute presentation slot. This is a big freakin' deal. The swag is being hauled out, as are the hexapod and other demos.