The Gulf Oil Spill in a Nutshell

North American companies farming out their manufacturing to Chinese, Indian, etc companies to save a lot of $$ then acting surprised and outraged when there is so much poverty and joblessness here.

This is a rather funny quote (considering compared to China and India... there is no poverty here).

I think this belongs in another thread.


Exxon hasn't paid yet for the Alaska Exxon Valdez disaster - their check has been in the mail for decades. That cleanup cost almost $10 billion.
1 Reply
2
Reply Wed 5 May, 2010 09:50 pm
@High Seas,
That is one fact-free statement.
2 Replies
1
Reply Wed 5 May, 2010 10:01 pm
@Robert Gentel,
You better check with the US Treasury - or just plain buy a share of Exxon and ask their VP Finance in your capacity as shareholder.

The State of Alaska may have that info as well. The Exxon insurers and reinsurers are causing the delays.

I don't think you understand the difference between the concepts of "liability" and "cash expenditure" - that's why you think it's "fact free".
1 Reply
2
Reply Thu 6 May, 2010 06:56 am
@High Seas,
LOL - absolutely delighted that so many risk modelers have congregated on this thread; this excerpt and link are for A2K readers (if any) not sure where to look up corporate,primary insurance, and reinsurance estimates of actuarial deficits versus actual cash disbursements, or the timing of either:

Total claims from the Chile temblor may be as high as $7 billion with losses of as much as 2.5 billion euros ($3.2 billion) from the winter storm, according to larger rival, Munich Re. Hannover Re, Germany’s second-biggest reinsurer, reported a 31 percent decline in first-quarter profit on May 4 on higher catastrophe claims.

Swiss Re estimates its loss from the explosion of the Deepwater Horizon drilling rig off the Louisiana coast last month to be $200 million before tax and expects the total insured market loss of the disaster to be between $1.5 billion and $3.5 billion.

Eagles rescued from the oil spill
In the case of Baker v. Exxon, an Anchorage jury awarded $287 million for actual damages and $5 billion for punitive damages. The punitive damages amount was equal to a single year's profit by Exxon at that time. To protect itself in case the judgment was affirmed, Exxon obtained a $4.8 billion credit line from J.P. Morgan & Co. This in turn gave J.P. Morgan the opportunity to create the first modern credit default swap in 1994, so that J.P. Morgan would not have to hold so much money in reserve (8% of the loan under Basel I) against the risk of Exxon's default. [20]

Meanwhile, Exxon appealed the ruling, and the 9th U.S. Circuit Court of Appeals ordered the original judge, Russel Holland, to reduce the punitive damages. On December 6, 2002, the judge announced that he had reduced the damages to $4 billion, which he concluded was justified by the facts of the case and was not grossly excessive. Exxon appealed again and the case returned to court to be considered in light of a recent Supreme Court ruling in a similar case, which caused Judge Holland to increase the punitive damages to $4.5 billion, plus interest.

After more appeals, and oral arguments heard by the 9th Circuit Court of Appeals on January 27, 2006, the damages award was cut to $2.5 billion on December 22, 2006. The court cited recent Supreme Court rulings relative to limits on punitive damages.

Exxon appealed again. On May 23, 2007, the 9th Circuit Court of Appeals denied ExxonMobil's request for a third hearing and let stand its ruling that Exxon owes $2.5 billion in punitive damages. Exxon then appealed to the Supreme Court, which agreed to hear the case.[21] On February 27, 2008, the Supreme Court heard oral arguments for 90 minutes. Justice Samuel Alito, who at the time, owned between $100,000 and $250,000 in Exxon stock, recused himself from the case.[22] In a decision issued June 25, 2008, Justice David Souter issued the judgment of the court, vacating the $2.5 billion award and remanding the case back to a lower court, finding that the damages were excessive with respect to maritime common law. Exxon's actions were deemed "worse than negligent but less than malicious."[23] The judgment limits punitive damages to the compensatory damages, which for this case were calculated as $507.5 million.[24] Some lawmakers, such as Senate Judiciary Committee Chairman Patrick J. Leahy, have decried the ruling as "another in a line of cases where this Supreme Court has misconstrued congressional intent to benefit large corporations."[25]

Exxon's official position is that punitive damages greater than $25 million are not justified because the spill resulted from an accident, and because Exxon spent an estimated $2 billion cleaning up the spill and a further $1 billion to settle related civil and criminal charges. Attorneys for the plaintiffs contended that Exxon bore responsibility for the accident because the company "put a drunk in charge of a tanker in Prince William Sound."[26]

Exxon recovered a significant portion of clean-up and legal expenses through insurance claims associated with the grounding of the Exxon Valdez.[27][28] Also, in 1991, Exxon made a quiet, separate financial settlement of damages with a group of seafood producers known as the Seattle Seven for the disaster's effect on the Alaskan seafood industry. The agreement granted $63.75 million to the Seattle Seven, but stipulated that the seafood companies would have to repay almost all of any punitive damages awarded in other civil proceedings. The $5 billion in punitive damages was awarded later, and the Seattle Seven's share could have been as high as $750 million if the damages award had held. Other plaintiffs have objected to this secret arrangement,[29] and when it came to light, Judge Holland ruled that Exxon should have told the jury at the start that an agreement had already been made, so the jury would know exactly how much Exxon would have to pay.[30]

Exxon's actions were deemed "worse than negligent but less than malicious." (from the Supreme Court decision)

The captain of the Exxon Valdez was drunk, asleep in his cabin, and had left an inexperienced officer in command while the ship was navigating through the most difficult part of its route. "Worse than negligent" was right in the case of Exxon - not clear at this point if BP's liability will meet that criterion. Ultimate damages may well be higher than those in Alaska - still fought about in the courts, as your link shows - and amounts / timing of payouts to the various afflicted parties are hazy at best. Both oil spills are classic demonstrations of "the tragedy of the commons".
0 Replies
3
Reply Thu 6 May, 2010 08:33 am
@ebrown p,
ebrown p wrote:

This is a rather funny quote (considering compared to China and India... there is no poverty here).

Try telling that to the people right here who live on the streets or in shelters and can't feed their children.
1 Reply
3
Reply Thu 6 May, 2010 10:01 am
@eoe,
I've been homeless and lived on the streets in America. I considered myself one of the luckiest men alive to have been born with the lottery ticket that is first-world citizenship even then and would still not begrudge a foreigner having an "American" job. If they are willing to do it for less, they clearly need it more.

Again, Americans who complain about other countries taking "their" jobs don't begin to have compassion for real poverty. Americans win the birth lottery to an obscenely rich country and then selfishly try to put a wall around it to keep others out.
1 Reply
2
Reply Thu 6 May, 2010 10:14 am
@Robert Gentel,
I guess it comes down to referential experiences. for most US citizens their references are extremely limited to relative affluence. on the other hand there exist within the US pockets of absolute deprivation generally unseen and denied.
1 Reply
3
Reply Thu 6 May, 2010 10:41 am
@dyslexia,
I've been that poor in America dys. You don't get poorer than I have been in America where I can't even prove I'm poor (a minor alone in the country and parents never filed for taxes) for any aid. But that is a social issue within America, and America doesn't need to hoard more of it's GDP (much gained from others opening their up to America) to fix it. You don't ever see people saying let's not sell **** to other countries and stop taking their money do you? No, you just see Americans whining that the other countries might be getting something out of our economy.

America has more than enough money to feed every single one of it's citizens well. It doesn't need to hoard jobs and economic advantages because of it's unfortunate citizens, it just needs to do a better ******* job taking care of it's own citizens with the obscene wealth it has.

If we want to help the American poor, helping them directly is a better way than to try to take it from someone even poorer. America reaps wealth from the whole world at a scale unheard of in history and to try to get more economic advantages over developing nations through protectionism is obscene selfishness as a nation and as an economy.

Want to help American poor? We don't need to take from the even poorer to do it.
0 Replies
1
Reply Thu 6 May, 2010 12:27 pm
@hamburgboy,
The legal liability of BP as per current law is capped at $75 million (maximum fixed after Exxon Valdez case).

The disaster in the Gulf has already cost more than that, with no end in sight. Satellite picture: 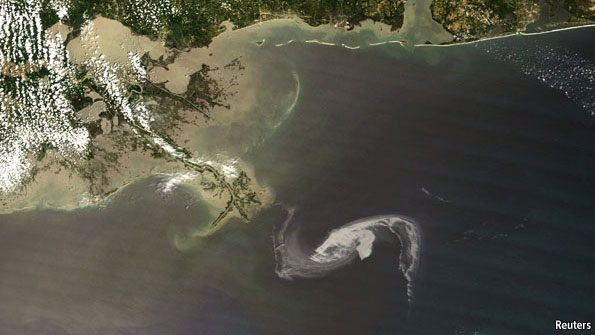 0 Replies
0
Reply Sun 23 May, 2010 09:48 am
I am very saddened by what I am seeing on the news of the devastation that this oil spill has caused and continues to cause.

But more importantly why aren't Americans asking why they don't better regulate this off-shore drilling?

I wasn't aware of the problem and can only assume others weren't either.
Robert Gentel wrote:

Brazil requires remotely-controlled valves that can be shut off in exactly such a case but in the US oil companies are allowed to operate without such restrictions.

Where are the shut off valves? Are they at the well head?
1 Reply
1
Reply Sun 23 May, 2010 01:13 pm
@TTH,
Forget my question since I have found a reliable source that explains the answer.

"The efficacy of the devices is unclear. Major offshore oil-well blowouts are rare, and it remained unclear Wednesday evening whether acoustic switches have ever been put to the test in a real-world accident."

Great destiny, our destiny!
To be reached by"responsibly!
Developing our natural resources, this land,
Blessed with clean air, water, wildlife, minerals, and:
Oil and gas! It's energy!
GOD GAVE US ENERGY!

Walter - it's Bunker Hill all over again. In fairness to the Brits, another one of them warned long ago - will not insult you by posting source:

The Russians have had success with this technique in gas wells, and as I understand it the BP well's output is about half oil and half methane gas:

In 1966, a nuclear explosive was detonated at Urtabulak gas field in Southern Uzbekistan in order to extinguish a gas well fire that had been burning for almost three years and had resisted numerous attempts at control. The gas fountain, which formed at pressures of almost 300 atmospheres, had resulted in the loss of over 12 million cubic metres of gas per day through a 200 mm casing " enough to supply a city the size of St Petersburg. Two 445 mm holes were drilled that aimed to come as close as possible to the well at a depth of about 1500 metres in the middle of a 200 metre thick clay zone. One of these came to within about 35 m of the well and was used to emplace the special 30-kiloton charge which had been developed by the Arzamas weapons laboratory. Immediately after the explosion the fire went out and the well was sealed.

This was the first of five PNEs used for this purpose, and all but one was completely successful in extinguishing the fire and sealing the well. No radioactivity above background levels was detected in subsequent surveys of any of the sites.