Forums: Sandwiches, Cooking, Food, Recipes, Sammiches
Email this Topic • Print this Page
Reply Sun 18 Apr, 2010 03:46 am
I have a few sandwiches I made up. I love 'em. Don't know know original they are. Somebody coulda come up with something fairly similar.

Do you have a samwich you made up and enjoy eating? Please share.

Get two slices of rye bread. Butter both slices. Then spread dijon mustard on top of the butter. Use bologna (preferably kosher) and Jarlsberg cheese if you want tang or muenster if you want creamy. Add a couple of slices of tomato and voila.

I'm gonna atribute that to Peter Coombe but not sure of the origin.
...and no vegemite? good grief Charlie Brown what's a sandwich without vegemite.
2 Replies
2
Reply Sun 18 Apr, 2010 05:23 am
@dadpad,
Yeah, I call them a sandwich.

It would be considered edible.


sardines on coarse wheat bread with slightly boiled thin celery strips, sliced onions , and watercress. Some people like mayonnaise but I like the veggie peppery flavor and the sardines alone. Its a MAine favorite.

Banana slices and a vanilla ice cream block between two waffle slices spread with nuetella.
1 Reply
2
Reply Sun 18 Apr, 2010 06:53 am
@Roberta,
I've invented a take on the Egg McMuffin that I call Egg McSwimpy. It starts with a whole wheat English muffin, toasted. Innards consist of a fried egg, a slice of cheese (I use a Colby-Jack) and fresh spinach leaves.
0 Replies
1
Reply Sun 18 Apr, 2010 12:23 pm
fm, That sardine samwich sounds good. I like the slightly boiled celery idea.

Swimp, I think the cheese does the trick with that one. I may just try it.
0 Replies
1
Reply Sun 18 Apr, 2010 01:06 pm
Grilled Cheese. Bread goes butter side down on the griddle. Add one slice cheese, about three tomato slices, one large or two medium dollops hot salsa, and another slice of cheese to seal in all the gooey stuff. Grill over a somewhat slower fire than usual to get everything melted together in the middle.

Do not cut the finished sandwich, or it will leak. Eat cautiously. Hot tomato can burn your lips.
1 Reply
1
Reply Sun 18 Apr, 2010 02:22 pm
@roger,
A Susquehanna Po Boy. Take a goodsized channel catfish , clean it and dredge it in bred crumbs and then fry it up till its goldeen brown.
SPlit it and debone before frying.
THEN
take you a big crusty Italian sammich roll and split it. Do up some shrimp and smoosh em a little bit . Next make a big glop of a tartar sauce with onion chips. LAY a half of the catty in the roll, take a generous helpi9ng a the shrimp and spoon on top. Then cover with some of the tartar sauce.

This will probably gross out caper haters, but I finally opened the jar with the big capers in it. What to do? I sliced them. Damn, they're full of seeds, look like baby figs inside. I haven't actually just eaten one, I'm working my way up to that. Sliced them into a recent meatloaf..
0 Replies
1
Reply Sun 18 Apr, 2010 02:54 pm
I don't hate cilantro, but it does make the dish redolent of dishwashing soap, as though the china hadn't been properly rinsed. But people go crazy, and chefs are some of the worst. About ten years back, it got to the point at which they were selling cilantro-flavored ice cream (well, maybe it wasn't that bad, but damned near). For my taste i had all the cilantro and lemon grass i ever want to eat while Clinton was still President.
1 Reply
1
Reply Sun 18 Apr, 2010 03:06 pm
@farmerman,
not sure about the celery, but i like sardines on a coarse brown or rye/pumpernickel, with some sliced red onion, thin sliced cucumber and a spicy mustard
0 Replies
1
Reply Sun 18 Apr, 2010 03:14 pm
Thanks Roberta! These are great...I have never had slaw on my barbecue sandwich though - but I also like to keep my food seperate on my plate...

I have one that's a spin on the grilled cheese too Roger...

bread butter side down on grill...fresh mozarella sliced and covering the bread...2 slices of tomato then a sprinkle of oregano and basil...then another layer of fresh mozarella with a slice of bread butter side up....when the first side is nice and brown flip that baby over until the other side is nice and brown. Summer tomatoes are a must. Gosh, it's good.
1 Reply
1
Reply Sun 18 Apr, 2010 03:16 pm
I like a roll with butter and matjes hering - so good!! 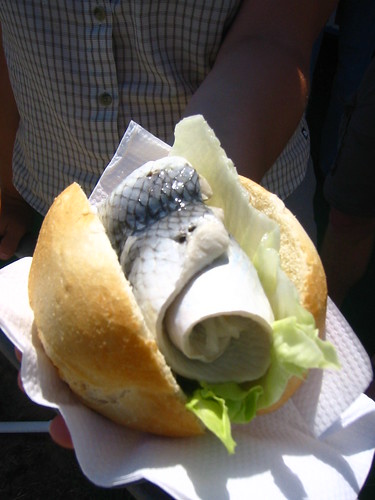 
farmerman, If I'm in the neighborhood, I'll look sufficiently pathetic so that you'll whip me up that catfish thingie. Not gonna try that on my own.

set, So I'm in a fancy shmancy restaurant (back in the days when I had an expense account. Loved dem.), and I see on the menu smoked Nova Scotia salmon with toast squares, chopped onion, and capers. I said to myself: "They got lox?" and ordered the appetizer. It was served elegantly (fancily shmancily) with the lemon wedge in gauze tied with a yellow ribbon and the crust cut off the toast. It was my first encounter with capers. I understand that capers are in veal piccata, but who knew? I liked the combination and put it together at home. It's the only time I eat capers. As for cilantro, I can take it or leave it. I don't buy it.

osso, Not sure if I ever ate the biggies. I was waiting to hear your original samwich creation. I'm sure you've got one.

dj, Mustard with sardines. Something to think about. I have sardines on rye with mayo, sliced onion, and tomatoes. Thinking about the mustard.

CJ, My grandmother pickled a herring you shouldn't know from it. Divine. Never thought of putting it in a samwich. Further food to ponder.
2 Replies
1
Reply Sun 18 Apr, 2010 06:25 pm
@Setanta,
That nyt article that I'm still too lazy to link said that osterizing (my word, I don't have a more modern blender) cut some of the repellent this and that - then making cilantro to pesto, and it being milder.

But, the nyt article declaims those who take it has soapy make up a group.
http://www.nytimes.com/2010/04/14/dining/14curious.html?scp=1&sq=cilantro&st=cse
0 Replies
1
Reply Sun 18 Apr, 2010 06:29 pm
@Roberta,
mayo is good with the sardines too, i like a hot spicy mustard (like a h0rseradish mustard or a lime wasabi mustard i have, good for clearing the sinuses)
0 Replies
1
Reply Sun 18 Apr, 2010 06:44 pm
@Roberta,
It's not really an invention (I don't think), but hamburger's herring beet salad on pumpernickel (on top of good sweet butter) is fantastic! pink and brown - very trendy colour combo these days

My real true sandwich invention as a kid was: sweet butter on white toast, slathered with homemade apple jelly, covered with a good holey piece of swiss cheese, with crunchy pieces of well-done bacon in the holes. Makes me salivate to think about it.
0 Replies
1
Reply Sun 18 Apr, 2010 07:25 pm
@Roberta,
Quote:

farmerman, If I'm in the neighborhood, I'll look sufficiently pathetic so that you'll whip me up that catfish thingie

Adding shrimp to any fried fish sammich is the base of a good Nawlins PoBoy. (there are others who claim that a hoagie ios a poboy but they are just fools).

Ive had Poboys with the main fish and shrimp and then accoutered with all sorts of "seemingly unfriendly fruits and veggies", just fa nice yeh.
0 Replies