that's why the lib/dems want the " 1st past the post election procedure ( ? ) abolished " .

http://news.bbc.co.uk/2/shared/election2010/results/
1 Reply
1
Reply Fri 7 May, 2010 06:55 pm
@ossobuco,
I think, osso, that many were surprised at how badly the Lib Dems actually did. There seemed to be an attitude of vote the scoundrels - Tories and Labour - out.
Nick Clegg was a smart, attractive guy, but people weren't voting for him but for a candidate in their own district.
On my thread about the upcoming November elections in the US, I (and Rasmussen) have noted that, while voters hate the generic incumbent, they generally like their own incumbent.
1 Reply
1
Reply Sat 8 May, 2010 04:56 pm
Cartoon video: The people have spoken

Thank goodness. Imagine if they had got 23% of the seats. No don't--it might scare you.

And the figure flatters them. They got about 15% of the eligible vote. Which means 85% of the electorate didn't vote for them. Clegg looks like a young lady with two suitors. 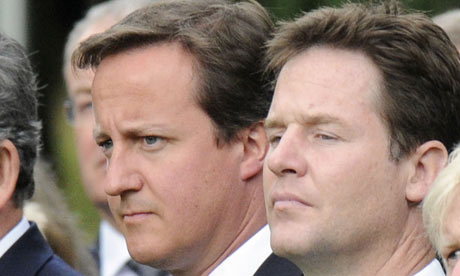 The coalition between David Cameron and Nick Clegg has been dramatically undermined by the leak of a top-secret letter outlining the Tory plan for a hardline Eurosceptic stance in government. Photograph: Rex Features

David Cameron's hopes of forming a coalition with the Liberal Democrats were dramatically undermined last night by the leaking of a top-secret letter outlining the hardline Eurosceptic stance he and William Hague planned to adopt in government.

The document, obtained by the Observer, is headed "draft letter from Foreign Secretary to Prime Minister" and was written last week. It assumed an outright Tory victory and spelt out how Hague intended to adopt a tough approach to Europe at a meeting of EU foreign ministers in Brussels tomorrow.

In the letter, compiled by civil servants but written in the first person, Hague tells Cameron how his message would be that "the British relationship with the EU has changed with our election" to one firmly against any further integration.

Exposing the massive gulf between Liberal Democrat leader Nick Clegg and the Conservative leadership on Europe, Hague says he would demand the right to repatriate powers over criminal justice as well as social and employment policy during the first term of a Tory government " demands many EU leaders say they would resist.

Hague planned to tell his EU counterparts: "Rest assured that we seek engagement, not confrontation. But our aim is to achieve these commitments during this parliament." He would also tell his first foreign ministers' meeting "we will never join the euro" and conclude: "You will find us firm but fair, playing a leading role, fighting our corner, practical and straight-talking."

Last night the Tories said they had no knowledge of the letter. But the Observer understands it was drawn up on the basis of detailed briefings between senior civil servants and Hague. The document came to light as Clegg, a strong pro-European, yesterday met his MPs and senior party figures to discuss a possible coalition with the Tories, who emerged from Thursday's general election with the largest number of seats but short of an overall majority. ...<cont> 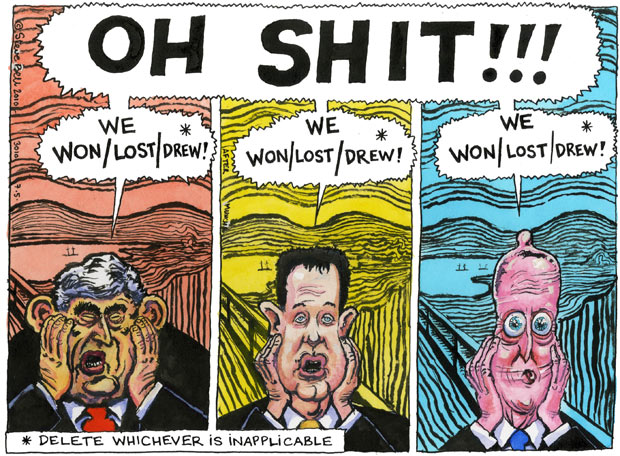 Thank goodness, however surreal it all is, that we have not got a Supreme Court of old fogies sitting in judgment on it and deciding the outcome.

The outcome will "emerge" as is right and proper in the green and pleasant countryside where Sir Charles Darwin composed his mind. His "species" emerged too. One might be forgiven a smirk at those constitutional dogmatists on the separation of spiritual and temporal affairs who sat and watched a committee decide their future destiny in secret with a gavel after the "hanging chad" fiasco proved irresolveable by natural evolutionary processes. Mr Bush was suddenly "there" just as in Genesis.

It is not often recognised that the close run race is a natural outcome of the modern politics of peacetime. There will be more of them until riots and disorder intervene.

Neither democracy nor sudden appearences feature in Sir Charles's masterpiece.
0 Replies
1
Reply Mon 10 May, 2010 02:07 pm
So PM Gordon Brown offers to fall on his sword in hopes of getting a coalition with the LibDems.
1 Reply
1
Reply Mon 10 May, 2010 03:29 pm
@realjohnboy,
I'm amazed John that this thread is not buzzing. What is going on is spellbinding for students of politics and, indeed, for students of the human race in its modern, sophisticated manifestations.

It is about nothing but money and power which is money in action. We are in for a long period of very active and bitter infighting.

The crucial thing to remember is that the House of Commons has precedence over Party. The Conservatives have not won control of the House. And bearing in mind that they expended a lot more money than the other parties in the election, that they concentrated that money in about 100 key marginal seats and that it was mainly donated by a "non-Dom" who pays little tax in the UK and was made a Lord in return for the cash. The conservatives won 36% of the votes and only 23% of those eligible to vote voted for them. 77% of the electorate did not vote for them.

The Labour Party has had an extremely hostile media for a long time. One newspaper supported them. And, it must not be forgotten, that media is based in the South-East of England which is the Conservative heartland.

There are very significant regional differences in each party's electoral base. And, indeed, class bases. Tribal some call it.

If I was to follow Stendhal and get crude about these things I would say that Labour represents productive work, Liberal Democrats the lower orders of bureaucracy and the Conservatives represent the diner. In a restaurant--the cooks and bottle washers, the outfront staff, and the troughers. Roughly. Very much so.

It's brilliant. In Rome real knives would have been in play in the old days.

The significant words used today, for my money, are "Progressive" and "Progressive Coalition".

This happened a few years back in a state election here.


Crazy times...as Labor managed to govern with the support of a very....er...unusual man.

How are our Brit friends feeling about all this?

A man born into a community where political forms, from the monarchy down to the popular chamber, are mainly hollow shams disguising the coarse supremacy of wealth, where religion is mainly official and political, and is ever too ready to dissever itself alike from a spirit of justice, the spirit of charity, and the spirit of truth, and where literature does not as a rule permit itself to discuss serious subjects frankly-- a community, in short, where the great aim of all the classes and orders with power is by dint of rigorous silence, fast shutting of the eyes, and stern stopping of the ears*, somehow to keep the social pyramid on its apex, and to preserve for England its glorious fame as a paradise for the well-to-do, a purgatory for the able, and a hell for the poor---why, a man born into all this with a heart something softer than a flint, and with intellectual vision something more acute than that of a Troglodyte, may well be allowed to turn aside and cry for moons for a season.

*--The recourse to Ignore.
1 Reply
1
Reply Tue 11 May, 2010 11:33 am
@spendius,
I hope you haven't all been spending your adulthoods thinking that there's any essential difference between a monarchy and a popular chamber.

There is a small difference in that with a monarchy you do get a chance of being led properly (one in three say) whereas with a popular chamber there's no chance. Not ever.
0 Replies
1
Reply Tue 11 May, 2010 11:52 am
@dlowan,
Not too sure how I feel about it...

I think all the politicians are muppets - trying to decide which muppet party is best for our country and worldwide ... well, I actually agree with Spendi's restaurant analogy on the parties.

in my opinion - Brown had to go. On a personal level (his personal level), I think he believes in what he says and is probably a very decent chap and has suffered much personal tragedy - as a politician and a leader in our world - nope - can't abide the man.

There's a big whole debate going on now on how there could possibly be a coalition with the labour party when Brown has already said he will be standing down as Primeminister - when that happens, who knows who will get the job, probably Milliband I would imagine - but how could the Clegg and the Lib Dems have a coalition with an unknown, as yet, Primeminister. That seems ridiculous to me.

As for the Conservatives - I was brought up in a Tory household and "lived the Blue".... now tho, whenever I hear the politicians bickering and shaking their heads - well, they actually turn my stomach at times.

The people did speak, I believe - they did not want Brown in - perhaps not so much 'not wishing Labour to be in power', but I think Brown was unpopular - he had to go. I liked Clegg - but, as someone on the TV said, I couldn't name another Lib Dem politician. Cameron - hmmmmmm - he can be a pompous arse at times - doesn't look and sound wholly convincing - just so much muppet talk.

As the Conservatives got most of the seats, I hope now that the Lib Dems have a coalition with them - I'm not sure whether the coalition is the best plan where there would be Lib Dems holding the seats or whether they will just sit back and support the Conservatives but have a case by case vote as and when they choose. I think I would prefer them to have seats in the Cabinet.

The Lib Dems are having a bit of a hissy fit because it makes their pushing power a little less now - the country cannot be without a PrimeMinister so the decision is now forced. Harriet Harmon is acting Labour leader.

Brown is talking right now, addressing the nation as such - it's probably the most genuine he has looked since he became Prime Minister - his smile actually looks real

. He looks tired (bloody knackered actually) and Mrs Brown is looking a little sad and trying to hold it together.

and so a new government forms...
1 Reply