Forums: Elections, Uk, Europe, Politics, Britain
Email this Topic • Print this Page
1
Reply Thu 6 May, 2010 05:13 pm
@realjohnboy,
It sounds as though it was in a number of the marginal seats, especially, where the the voters were unable to vote. Where apparently there was a far higher than "anticipated" voter turn-out. But imagine running out of voting papers because more voters turned up than expected! (as reported in one seat) Pretty incredible.

12.13am: The polling fiasco seems to be getting more and more serious. In Chester Labour are complaining about 600 people not being allowed to vote, even though they were on the register. That could be significant because Labour has a notional majority of just 973 in the city.

There have been problems in Sheffield too. I'm told that students in Nick Clegg's constituency (many of whom were expected to vote Lib Dem) were also prevented from voting.

The Electoral Commission has said that it will undertake a "thorough review" of what has happened.

we're just political junkies, all the way round

Labour in a coalition government? 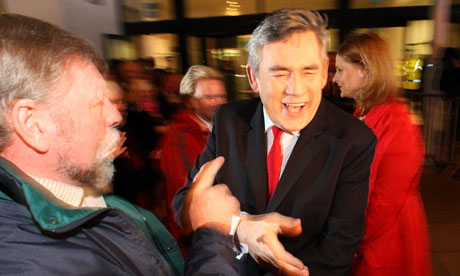 Gordon Brown and his wife Sarah arrive at the Adam Smith College for the Kirkcaldy and Cowdenbeath count tonight. Photograph: Andrew Milligan/PA

1.02am: Paul Lewis has sent me this from the Brown camp:

Brown is about to deliver his speech. Downing Street aides say the PM will call for a "strong, stable and principled government" in times of economic uncertainty " they're saying that is shorthand for a coalition government, not a minority Tory government. It is the first sign from the PM that he will seek a coalition if exit polls are correct.

1.04am: Matthew Taylor, who has been monitoring the BNP, has sent me this.

Labour sources in Stoke, the BNP's second target seat, are also sounding confident and say the far right party may have been be pushed into third or even fourth place.

0 Replies
1
Reply Thu 6 May, 2010 06:19 pm
I trolled around the Guardian site, reading tweets about the claims of denial of access to the polls by some voters. The epicenter seems to be in Cardiff in the SW where students claim there was an express lane to vote for "residents" while "students" were made to stand in longer lines where, they say, they remained until the polls closed at 10 pm.
One tweet suggested that, while waiting for results, people should take to the streets.
0 Replies
1
Reply Thu 6 May, 2010 06:28 pm
@msolga,
Quote:


I just watched Gordon Brown's acceptance speech in his own constituency. He achieved an increased majority, btw. But as the BBC commentators noted, it sounded more like a valedictory speech that anything else. Thanking loyal friends & political allies, listing his achievements in government & his ongoing commitment to strong, stable government. Neither he nor his wife looked particularly happy or optimistic.
Will be interesting to see what this speech could mean, exactly, in terms of his political future.
0 Replies
1
Reply Thu 6 May, 2010 07:14 pm

http://www.guardian.co.uk/politics/interactive/2010/may/06/uk-election-results-map
1 Reply
1
Reply Thu 6 May, 2010 07:35 pm
@msolga,
Gonna have to drag myself away from the BBC coverage soon & do some things that need doing. (I can't help but wonder though, if there might be something a bit strange about becoming so fixated on such stuff. Ever wondered about this yourselves, RJB, ehBeth?

)
1 Reply
1
Reply Thu 6 May, 2010 07:38 pm
I am off to bed. My back hurts.
There were few posts here, but a decent number of views.
As I see it, Mr Cameron of the Conservatives will be the next PM. They will not get an outright majority of the seats but they will get close enough that they can form a coalition with a minor party, like the Ulsterists, to send Mr Brown packing tomorrow from 10 Downing Street.
The pundits will ponder what happened regarding Mr Clegg and the Liberal Democrats. People seemed to be swooning for him until they went to actually vote.
The alleged voting irregularities will be an interesting story to watch.
So where are we off to next?
2 Replies
1
Reply Thu 6 May, 2010 07:44 pm
@realjohnboy,
Quote:

So where are we off to next?

I'm not quite sure about your Conservative (outright majority) victory prediction, but maybe I'm allowing my heart to rule my head?

The alleged voting irregularities will be an interesting story to watch.

Indeed, especially if there are legal challenges.

Good night, RJB.
0 Replies
2
Reply Thu 6 May, 2010 07:50 pm
@msolga,
I never wonder about the addiction. mrs hamburger had me interested in politics at quite a young age, took me canvassing for Committee for an Independent Canada at one point.

I stayed in, watching party conventions, instead of playing, when I was 8 - 10 years old - discussing the results with my friends' parents. It's in my blood