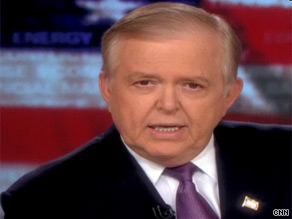 if you look in the dictionary under two faced scumbag, this picture appears*

(CNN) - The same week Lou Dobbs suggested he would consider running for the White House in 2012, the former CNN anchorman appears to be softening his stance on his signature issue of illegal immigration.

In an interview with the Spanish-language network Telemundo gaining attention Wednesday, Dobbs told interviewer Maria Celeste he is one of the Latino community's "greatest friends" and appeared willing to embrace a form of amnesty he spent years criticizing.

"What isn't working is a penalty to those who are in this country illegally for whom we can both be building a bridge to the future in which there is legalization and at the same time constructing an environment in which everyone is clear and unequivocal about the need for boarder security and a regulated flow of immigration," Dobbs said.

"I want to engage in a meaningful and constructive dialogue, and work with those who will work toward real solutions," the former CNN anchorman also said, maintaining his position on immigration hasn't changed despite what appears to be a more moderate stance. "I think we need to honestly come together, those who have differing views…and make some real progress toward an understanding a compromise for those who are in this country illegally."

Dobbs also brushed aside suggestions he is the "No. 1 enemy" of the Latino community, saying that image is a result of propaganda "efforts of the far left."

"Whatever you have thought of me in the past," Dobbs said, "I can tell you right now that I am one of your greatest friends and I mean for us to work together. I hope that will begin with Maria and me and Telemundo and other media organizations and others in this national debate that we should turn into a solution rather than a continuing debate and factional contest."

The comments come as Dobbs has fueled speculation the former anchorman may have his eye on politics as a second act, either in 2012 as a presidential candidate or as a challenger to New Jersey Sen. Robert Menendez, the only Hispanic in the Senate.

In an interview with Washington radio station WTOP Monday Dobbs said a 2012 run is "one of the discussions that we're having," though he did not indicate if he'd run as a Republican or third-party candidate.

"I think Lou is realistically saying, that's a long way off, but if he did run for office there'd have to be an intermediary step, such as the Menendez seat," he said .

Dobbs amicably parted ways with CNN earlier this month. The former anchor's strong views on illegal immigration have made him a lightning rod for criticism from Hispanic groups, and a popular figure in some conservative quarters.


*at least i believe it should