how does aircraft fly inverted?

Here's the basic principle: As the wing moves through the air it deflects a certain mass of air downward, due to shape of the wing as well as the angle of impact to the airstream. If the mass of air deflected downward exceeds the mass of the airplane, then the plane is lifted as a result of equal and opposite force reactions.

As you can see from the image below, a lot of air is being pushed down as the airplane passes above these clouds. That air has mass and Newton's ideas of equal and opposite reactions explain the lift. 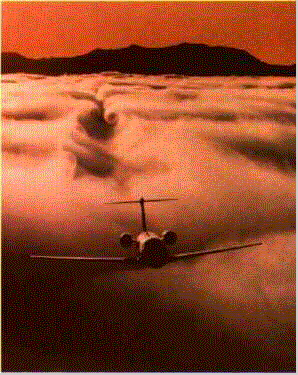 Here are The Details.
1 Reply
1
Reply Sun 8 Nov, 2009 07:37 pm
The cross section of a body (like a wing) will range in the lift it produces as a function of inclination. Many wing designs use airfoil cross sections that will produce lift even at a slightly downward inclination (usually about 5 degrees at max). If a plane is upside down the inclination of the wings (the main lift producing sections) can be positioned such that the lift vector is still positive with respect to the ground.

Many aerobatic planes will use a symmetrical wing or a near symmetrical wing cross-section so that they can very specifically do this. These wings however produce less lift at lower angles of inclination.

For somewhat arcane reasons the wingtips of a wing will trail rather intense vortexes of swirling air with axis parallel to the direction of flight. These were a major component in the cloud phenomenon in the photo pasted earlier. The energy in these vortexes is a major component of the drag produced by the aircraft. The little winglets one sees on modern airliners are there to minimize the energy lost in these vortexes.

Most airfoils are designed to be asymmetric in cross section, involving a greater distance from the leading edge over the top surface to the trailing edge than over the bottom surface. This "camber" is an efficient way to produce lift, particularly in subsonic flight. However higher speed aircraft generally haver thinner, more symmetrical wings. A positive angle between the wing axis and the incoming airstream (angle-of-attack) is also an effective way to achieve the same thing, and for transonic or supersonic flight it is more efficient (i.e. produces less drag) than camber.

Any aircraft in inverted flight is using angle-of-attack to produce the lift required. If the aircraft is truly in inverted level flight at constant altitude, then the pilot is experiencing a negative "1 g" - he is hanging in the straps, being pulled with a gravitational force equal to his weight to the top of the canopy. One can see this occasionally at airshows. Most inverted flight, however, is in maneuvering situations in which the "g" force is usually positive (i.e. pushing the pilot into the seat). Negative "g" flight is very uncomfortable and our physical tolerance for it is limited to about -2.5 g (compared to about 7 g positive).

The first step in training a fighter pilot is getting him used to using the vertical plane; pointing the nose straight up and maneuvering through the vertical to gain advantage.

The little winglets one sees on modern airliners are there to minimize the energy lost in these vortexes.

I'd add that elliptical wings are the most efficient at minimizing vortexes, but winglets are designed because they make for significantly easier manufacturing.

The cross section of a body (like a wing) will range in the lift it produces as a function of inclination.

The little winglets one sees on modern airliners are there to minimize the energy lost in these vortexes.

I'd add that elliptical wings are the most efficient at minimizing vortexes, but winglets are designed because they make for significantly easier manufacturing.


It is an eliptical distribution of lift (from tip to tip) that minimizes, not vortexes, but rather induced drag. This is a result that was discovered in the 1930s by the British fluid mechanicist, G.I. Taylor. This can be achieved with an eliptical wing, but there are easier ways to do it.The British Spitfire fighter was an early example of a rather literal application of the principle. However the Germans achieved much the same outcome with the BF 109 using a, much more easily manufactured, trapeziodal wing planform and decreasing camber towards the wingtips.

Perhaps you are referring to something different with the "winglets". I was referring to the small airfoils that one often sees eminating from the wingtips of airliners, often inclined about 45 degrees upward. They add to manufacturing complexity, but significantly reduce the energy in the trailing vorticies and thereby reduce drag & fuel consumption.
2 Replies
1
Reply Mon 9 Nov, 2009 05:02 pm
@georgeob1,
So thats why the Mustang and Spitfire have those neat rounded wingtips.

Why did the F4U Corsair have those bent wings? Was that for drag minimization or just so they could fit on a carrier?


Ionus was right: it was to provide ground clearance for the propeller. The Corasir, however, wasn't very successful as a carrier aircraft. The cockpit was tooo far aft and the pilot's visibility over the nose during carrier landing was insufficient.
0 Replies
2
Reply Mon 9 Nov, 2009 07:09 pm
@farmerman,
farmerman wrote:

So thats why the Mustang and Spitfire have those neat rounded wingtips.

Actually the Spitfire has a wing that was truly elliptical in plan view. Very hard to manufacture, with compound curvature on the skin and highly variable chord length. However, very maneuverable, and, with low drag & a big engine, able to accelerate rapidly at low speed and, following a tight turn, when the g load was relaxed. In the terms of energy maneuverability as later developed by Col John Boyd in the early 1970s , the Spitfire was unmatched.

The Mustang represented a later generation in wing design with less camber and a thinner wing for better performance at higher airspeed. Unusually, it combined maneuverability with long range & high payload. Not so successful at first, but unbeatable after it was fitted with the higher power Merlin engine.

Actually rounded wingtips and the little winglets you can see sticking up from the wingtips of modern airliners have the same function - to reduce the energy lost in the trailing wingtip vortices.

The flow over a wing can be represented as a combination of linear flow and a circular vortex flowing over and under the wing. It turns out that the lift is proportional to the product of airspeed the strength of the vortex (or the line integral of circulating relative airflow on any circular path around the airfoil. This vortex is real, and when an airliner rotates quickly at takeoff it sheds an opposite vortex which stays behind on the runway. On a hot dusty day at a Southwestern airport, you can actually see the standing shed vortex behind the aircraft. That's why small aircraft aren't allowed to land or takeoff for a few minutes behind a "heavy" .
1 Reply
2
Reply Mon 9 Nov, 2009 07:14 pm
@Ionus,
Prolonged is the key word. You can roll a helicopter. The advancing blade is trimmed to a lower angle of attack than the retreating blade. How much so depends on the airspeed. If they both had the same angle of attack, the advancing blade would have more lift than the retreating blade, again depending on the forward air speed.

Supposedly, the cyclic controls could be engineered in such a way as to permit inverted flight to permit hedge trimming. They''re still looking for a test pilot.
0 Replies