TV programs & movies exploring the concerns of teenagers .. for teenagers

I'm talking TV programs & films exploring "issues" of importance to young people, which they wouldn't consider too patronizing, moralistic or twee. Realist representations of their lives, in other words. One lot for 13 -14 year olds, another for 15 to 16 year olds. These could include any number of themes - eg friendship, family, school, drug "issues", love, etc .... And (here's the catch!) this material would have to be suitable for viewing by students in schools, so anything classified "recommended for adult viewers" is out. So not easy, hey?
Type: Discussion • Score: 11 • Views: 4,543 • Replies: 37
No top replies
2
Reply Sun 12 Jul, 2009 01:00 am
@msolga,
While looking around, I came across this television series from way back - 1994: My So-Called Life. I was only going to watch a particular episode or 3, but ended up watching the whole lot! It presented a pretty realistic picture of young people, plus quite a bit more:

My So-Called Life deals with issues much discussed in the mid-nineties, including child abuse, homophobia, teenage alcoholism, homelessness, adultery, kinky sex, school violence, same-sex parenting, censorship, and drug use. While a lot of shows brought up these themes as a one-time issue (a "very special episode") that would be introduced as a problem at the beginning of an episode and resolved at the end, in My So-Called Life they are just a part of the continuing fabric of the story lines. The title of the show alludes to the perception of meaninglessness that many teenagers experience, and therefore encapsulates the main theme of the series. The show depicts teenage years as difficult and confusing as opposed to a light, fun-filled time of pranks and jokes. 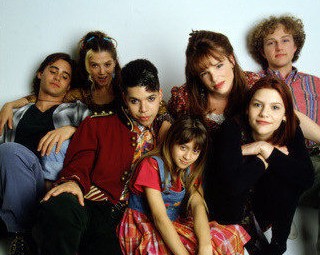 The young cast (excluding the oldies) of My So-Called Life.

It'd be helpful of you could indicate the particular age group a movie/TV program would appeal to, along with your suggestions.

Is Samson and Delilah rated for teens?


I know it's aboriginal specific...but still.

Sixteen-year-old Minnesotan high-schooler Juno MacGuff (Ellen Page) discovers she is pregnant with a child fathered by her friend and longtime admirer, Paulie Bleeker (Michael Cera). While at first she intends to have an abortion, she changes her mind and decides to make a plan for the child's adoption. With the help of her friend Leah (Olivia Thirlby), Juno searches the ads in the Pennysaver and finds a couple she feels will provide a suitable home. Along with her father, Mac (J. K. Simmons), Juno meets the couple, Mark and Vanessa Loring (Jason Bateman and Jennifer Garner), in their expensive home and expresses a desire for a closed adoption.....

0 Replies
1
Reply Sun 12 Jul, 2009 08:39 am
@msolga,
How about some series that just get into exploration or adventures, where the kids are critical parts not just post assemblers of a plot or victims or the embodiment of your "Tweeness" (I hadda look that up).

When I was a kid I ws always devouring adventure and exploration books, why not some shows sort of like the "Goonies" but without all the simpleton ****.
I think that kids oughta be spoken AT, not down to.
0 Replies
2
Reply Sun 12 Jul, 2009 08:54 am
"Good Will Hunting" is excellent:

but according to the imdb it comes with this warning:

Sex & Nudity
EditHistory The movie covers young adult intimate relationships, but the scenes do not include nudity, only a man is seen with no shirt on and you see his upper half.

No sexual activity is shown.

Violence & Gore
EditHistory There's one scene where a fight is shown in slow motion, there's one shot where Will punches another guy in the face and from the impact of the hit, he cuts him and blood smears. Other than that, nothing explict.

Alcohol/Drugs/Smoking
EditHistory Many scenes with alcohol and smoking. Many bar scenes.

1 Reply
1
Reply Sun 12 Jul, 2009 09:06 am
@boomerang,
FINDING FORRESTER, EXCELLENT. A real partnership between the kid and this recluse author. Not a cutesy tale and one that shows what trust in ones abilities can result.
1 Reply