CIA Says Pelosi Was Briefed on Use of 'Enhanced Interrogations'

Forums: Politics, Democratic Party
Email this Topic • Print this Page
Reply Fri 8 May, 2009 06:03 am
By Paul Kane
Intelligence officials released documents this evening saying that House Speaker Nancy Pelosi (D-Calif.) was briefed in September 2002 about the use of harsh interrogation tactics against al-Qaeda prisoners, seemingly contradicting her repeated statements over the past 18 months that she was never told that these techniques were actually being used.

In a 10-page memo outlining an almost seven-year history of classified briefings, intelligence officials said that Pelosi and then-Rep. Porter Goss (R-Fla.) were the first two members of Congress ever briefed on the interrogation tactics. Then the ranking member and chairman of the House Intelligence Committee, respectively, Pelosi and Goss were briefed Sept. 4, 2002, one week before the first anniversary of the 9/11 terrorist attacks.

The memo, issued by the Director of National Intelligence and the Central Intelligence Agency to Capitol Hill, notes the Pelosi-Goss briefing covered "EITs including the use of EITs on Abu Zubaydah." EIT is an acronym for enhanced interrogation technique. Zubaydah was one of the earliest valuable al-Qaeda members captured and the first to have the controversial tactic known as water boarding used against him.

The issue of what Pelosi knew and when she knew it has become a matter of heated debate on Capitol Hill. Republicans have accused her of knowing for many years precisely the techniques CIA agents were using in interrogations, and only protesting the tactics when they became public and liberal antiwar activists protested.

In a carefully worded statement, Pelosi's office said today that she had never been briefed about the use of waterboarding, only that it had been approved by Bush administration lawyers as a legal technique to use in interrogations.

"As this document shows, the Speaker was briefed only once, in September 2002. The briefers described these techniques, said they were legal, but said that waterboarding had not yet been used," said Brendan Daly, Pelosi's spokesman.

Pelosi's statement did not address whether she was informed that other harsh techniques were already in use during the Zubaydah interrogations.

In December 2007 the Washington Post reported that leaders of the House and Senate intelligence committees had been briefed in the fall of 2002 about waterboarding -- which simulates drowning -- and other techniques, and that no congressional leaders protested its use. At the time Pelosi said she was not told that waterboarding was being used, a position she stood by repeatedly last month when the Bush-era Justice Department legal documents justifying the interrogation tactics were released by Attorney General Eric Holder.

The new memo shows that intelligence officials were willing to share the information about waterboarding with only a sharply closed group of people. Three years after the initial Pelosi-Goss briefing, Bush officials still limited interrogation technique briefings to just the chairman and ranking member of the House and Senate intelligence committees, the so-called Gang of Four in the intelligence world.

In October 2005, CIA officials began briefing other congressional leaders with oversight of the intelligence community, including top appropriators who provided the agency its annual funding. Sen. John McCain (R-Ariz.), a prisoner-of-war in Vietnam and an opponent of torture techniques, was also read into the program at that time even though he did not hold a special committee position overseeing the intelligence community.

A bipartisan collection of lawmakers have criticized the practice of limiting information to just the "Gang of Four", who were expressly forbidden from talking about the information from other colleagues, including fellow members of the intelligence committees. Pelosi and others are considering reforms that would assure a more open process for all committee members. 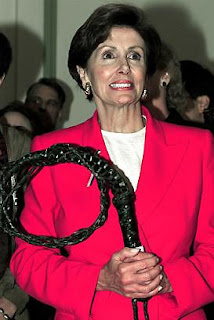 0 Replies
1
Reply Fri 8 May, 2009 06:57 am
Since I blame most of those democrats for going along with all of the Bush administration post 9/11 because of the gung hoe spirit which prevailed the political climate at that time including going along with the Iraq war until it was made clear to them that a majority of the base of democrats disapproved of all those things, having learned Pelosi was briefed of use of enchanced interrogations in 2002 little surprises me. Nor does it surprise me that like a lot of the democrats she has been engaged in a lot of denial of culpability to the Bush administration post 9/11 policies. It was precisely this issue which caused me to back Obama in the democratic primaries against Hillary as I saw her in the same light. Now it seems as if Obama is caving in to Hillary's point of view rather than the other way around. I am disappointed but still desperately hopeful he will stop that soon.
1 Reply
1
Reply Fri 8 May, 2009 09:15 am
@revel,
And we believe the word of the CIA who gave the Bush government the justification they needed for the Iraquie war why. Because in the past they have been truthful and honest. Wake up, they are just another arm of U S politics.
0 Replies
2
Reply Fri 8 May, 2009 09:45 am
That's right, let us not condemn the architects, advocates, and authorizers of torture. Instead, let us condemn the briefed.

That's not to let her off -- I think anyone who knew about it and did not attempt to stop it should be publicly spanked (don't get excited, woiyo) -- but being briefed about somebody else's grand torture plans hardly makes one complicit.
0 Replies