loss of the Rose Art Museum

Forums: Art, Art Museums, Brandeis, Rose Art Museum, University Trustees
Email this Topic • Print this Page
Reply Mon 2 Feb, 2009 01:36 pm
It is to weep... or gnash teeth (in my opinion). I had a friend who was a literature prof at Brandeis for a while. If he hadn't already passed away in the nineties, this might kill him --- 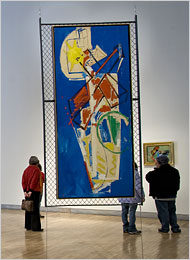 Erik Jacobs for The New York Times
One of the current exhibitions at the Rose Art Museum shows the work of the Abstract Expressionist Hans Hofmann.


In the Closing of Brandeis Museum, a Stark Statement of Priorities
By ROBERTA SMITH
Published: February 1, 2009

clip from article ---
WALTHAM, Mass. " Few things are more poignant than a gem of a museum whose days may be numbered. So it was at the Rose Art Museum at Brandeis University on a visit Friday, days after the university’s trustees voted unanimously to trash the institution by closing it and auctioning off the 6,000 works in its collection. The action came without consulting either the museum’s own board of governors or its director, Michael Rush.

The Brandeis vote was an act of breathtaking stealth and presumption: a raid on a museum that supports itself, raises its own funds and has consistently planned wisely for its own future without leaning on the university. The trustees treated it nonetheless as a disposable asset.
end/clip (longer article)

I always wonder why people like the trusties of Brandeis do the stealth thing like this? Why not just open it for discussion?

And considering the museum seemed to operate without being parasitic...what they thinking? The dollars obtained will be soon gone...and the art will be somewhere else.
1 Reply
1
Reply Mon 2 Feb, 2009 02:36 pm
@Frank Apisa,
Agree.
1 Reply
1
Reply Mon 2 Feb, 2009 02:38 pm
@ossobuco,
The real tragedy could easily be that some rich nabob buys up pieces of the collection...and as so many rich people do...puts them into bank vaults where the public will never see them.

Of course, they may also put them up on the walls of their homes...where the public will never see them anyway.

That is the possible tragedy.
1 Reply
1
Reply Mon 2 Feb, 2009 03:10 pm
@Frank Apisa,
And, as the articles says, there are a lot of repercussions for the art department. But, the presumed loss of the public's chance to see the work is heartbreaking.
0 Replies
1
Reply Wed 1 Dec, 2010 08:28 pm
@ossobuco,
I remember this tragedy. I visited the Brandeis campus in the lated 1990's to utilize their great university library when I was a student at Framingham State College. I regret never taking the time to visit the Rose Art Museum when I had the chance. I usually was too stressed and preoccupied with whatever history paper I was researching at the time to think about any digressionary leisure activities....
0 Replies
1
Reply Wed 1 Dec, 2010 09:38 pm
@ossobuco,
I've never been, but this sounds like a great loss. Hopefully, someone will step forward to keep the collection together. From the university perspective, the logic is easy to see. The works are valued at $350 million and represent the biggest asset of the university. While the museum pays for itself, investing $350 million will bring in $20 million a year and cover the current budget shortfall without touching the principle. It's too bad that they made risky bets with their endowment and got hammered. I can see the logic of letting go of something precious to preserve the whole, but I think it diminishes Brandeis as a whole to have to do this.
0 Replies
2
Reply Wed 1 Dec, 2010 09:50 pm
I see this post goes back to 2009. My understanding is the museum is still in operation and the threat was never carried out because of huge internal and external protest. Anyone know anything of the current status?
1 Reply
1
Reply Wed 1 Dec, 2010 09:52 pm
@Green Witch,
Thanks for jogging my memory. I did read something about an alternate plan:
Rose Art Museum's Debt Plan? Rent Art Through Sotheby's
http://www.artinfo.com/news/story/35177/rose-art-museums-debt-plan-rent-art-through-sothebys/
0 Replies
1
Reply Wed 1 Dec, 2010 10:00 pm
Oh, reading..
0 Replies