A lucky woman found an umbrella worth £17,500 in her house during a spring clean.

The rare Faberge umbrella had been given to the unnamed woman - along with some old walking sticks - by her mother-in-law when she moved home.

But it was only when she was gathering them up to take to a charity shop she spotted the odd handle and took it to a jewellers.

They instantly recognized it as the work of Michail Perchin, a craftsman at the House of Faberge and told her it was worth a fortune, needless to say she didn't use it to shelter from the rain on her way home.
Yesterday the woman from Devon cashed in as the umbrella went under the hammer at Bearnes Hampton and Littlewood in Exeter and sold for £17,500. 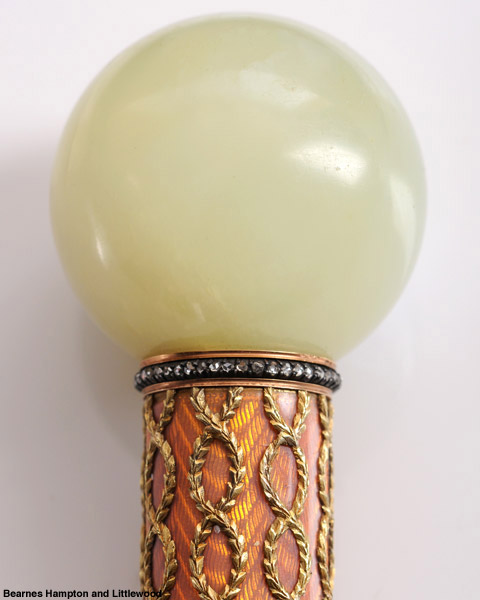 A spokesperson for BHL said: "There are a few jewellers who excite an auctioneer more than the name Faberge.


"This handle made by the workmaster Michail Perchin for faberge, it was enamelled, gold, bowenite and rose diamond mounted.

"The pale green bowenite ball above a collar decorated with translucent pink guilloche enamel with applied gold wreaths of laurel and between rose-diamond set bands.

"As with all pieces of Faberge there was both national and international interest and it wasn't long before the internet and telephone bids took over and after some intensive bidding the handle was finally sold for £17,500 (hammer price). The vendor who was present was delighted."