Help the clueless: Dressing for a military shindig

I'm going to my brother's promotion ceremony next month. It is a ceremony and reception and a pretty big deal. I have no idea how formal to dress myself or my family. It is in the afternoon, on a weekday. I know it isn't black tie but I'm not sure what is appropriate.

I would just ask him but .... well.... I think he would down play the whole event. I also know that there will be some big-wigs there and that introductions will take place and I don't want to embarrass myself or him.

A not so little black dress? A girl-suit?

What about kids? Can you rent suits for kids? Is just a shirt and slacks okay?

Type: Question • Score: 7 • Views: 5,838 • Replies: 31
No top replies
2
Reply Mon 1 Dec, 2008 06:11 pm
You should dress formally. The "little black dress" would only be acceptable if it were a formal dress, as opposed to a "sexy" dress. Probably more appropriate would be a suit with a skirt appropriate to the season (i.e., winter, however winter is observed where the ceremony takes place).

I said a NOT so little black dress. Even I know better than sexy!

So does formal mean hose and heels or could I do a long skirt and dressy boots?

I'm going to call around tomorrow and see if anyone rents stuff for kids that also do tailoring. Mo is hard to fit.

If I can't find someone who offers that type of service how do you select a premade garment suitable for tailoring? Do you get it to fit in the waist and then just have it hemmed/taken in/whatever?
1 Reply
1
Reply Mon 1 Dec, 2008 07:51 pm
@boomerang,
This is the General? Are you sufficiently familiar with his circle of acquaintance? The boots might be sniffed at by blue hairs, and hose (with shaved legs--cruel, ain't i?) with pumps might be more appropriate, but what will really matter most is the General's response. If he is glad to see you, and you are reasonably presentable, that's all that will matter. If he's not too much of a hard ass, the boots would probably be fine. 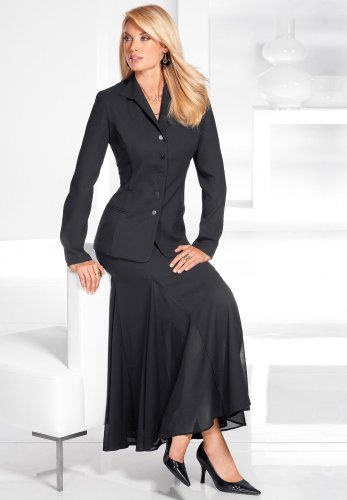 have fun, and if Mo can handle a Real tie, he will win all the ladies...
0 Replies
1
Reply Mon 1 Dec, 2008 08:53 pm
Yes, this is the General. I would tell you where, Setanta but I don't think I want to post it on A2K since I don't know if some of our resident nutjobs could figure out who his is by saying so. eBeth might have once had my email address......

Yes, he will be wearing his dress blues. His current boss is doing the ceremony.

I was thinking of somthing kind of like that Greenwitch, matching blazer and skirt, not a suit but a girl-suit kind of thing, but I think I'd embarrass myself in heels. I've never been able to walk in them. I would need a much more practical shoe.
2 Replies
1
Reply Mon 1 Dec, 2008 08:55 pm
@boomerang,
Go for a lower, square heel and you should be fine. Even a small heeled pump will make you look more elegant than any style boot.
0 Replies
1
Reply Mon 1 Dec, 2008 10:07 pm
I have an insane week ahead of me -- the last of my holiday guests left this morning and things are crazy around here. I don't have a lot of time to get prepared for this party. We're all very excited but I confess to being nervous too.

I actually do shave my legs on a fairly regular basis and somewhere I do have hose and if not I do know where to buy them. My brother is always happy to see me; he's been my best friend for nearly 50 years. That's why I was worried that he would down play the shindig -- he will be happy if I'm there no matter what. He knows I'm a very casual person but he wants me there anyway.

I also know that within the military that things like family matter a great deal. He has told me about people who have been passed over for promotion for strange little family weirdness or wrong place, wrong time postings.

He will always love me not matter what and that's the reason I want to make a good impression.

Mo will be the star.

(let us know how it goes, without details of course...)
1 Reply
1
Reply Tue 2 Dec, 2008 05:12 am
@Rockhead,
Skirt suit, knee length or lower. If no skirt suit, then a slacks suit or a skirt with something like either a boiled wool jacket or a sweater set but that is about as informal as I'd go. Hose and heels. They can be low heels. Boots only if the weather is really bad. Think classic office style.

When I was admitted to the Bar, I wore a suit, and so did everyone in my family, male and female. I am guessing this is similar protocol.
0 Replies
1
Reply Tue 2 Dec, 2008 07:11 am
It doesn't really matter if you tell where the event will take place, and i completely understand you desire not to give information unnecessarily to the nut cases here.

I have fond memories of Fort Lewis. I was sent there to be shipped overseas, but something screwed up somewhere, and i spent ten days there. It was sunny and clear for most of that time, which i understand is unusual. It had rained for the first two days i was there, though, so i experienced something truly extraordinary. Because of my rank, i was put in charge of a guard mount, and had to march the silly boys around to their guard posts. On the third day, as i was marching the poor fools around the post, we came around a corner, and there, at the end of the street, was Mount Rainier. (Not, of course, that it was actually at the end of the street, but it looked as though it were, and it dominated the view.) It was breathtaking, with the upper slopes clothed in white--it was one of the most beautiful sights of natural scenery i've ever seen, and it was so unexpected.

Fort Lewis was, like any post you are stationed at with nothing to do, pretty boring. But it was full of boys on orders to ship out to southeast Asia, and as i was usually in my class A uniform, with the collar insignia which designated the medical corps, i was the object of a fair amount of ass-kissing, people would hop up to get me food at the mess hall, or to get me a beer at the NCO club, things like that. It was considered a good idea to make up to medics and MPs, just for future reference. I've always retained good memories of Fort Lewis, better than any of the other duty stations to which i was assigned.
1 Reply
1
Reply Tue 2 Dec, 2008 09:52 pm
@Setanta,
I've visited, I think, five military bases and Ft. Lewis is by far the most beautiful. Perhaps that was influenced by my brother's rank while he was there. The officer's "quarters", the "loop" as it is called, are beautiful houses that overlook the parade grounds, ending in that view of Mt. Rainer.

Of course, my adoration of the PNW has been noted time and again.

I thought Ft. Irwin was way cool, not being a desert girl in any form and I had a blast visiting Ft. Levenworth.

Ft. Benning is kind of a blur. I was only there for a short second.

Does VMI count as a base? I spent some time there! Fun time!

I found a place to rent a suit for Mo where they will tailor it to fit. I have a hair cut scheduled this week and will do some shopping for my outfit at the same time. Mr. B is on his own grown up adult self.

In a few years my brother should be stationed back at the Pentagon. Mo will be at the perfect age to do a big DC visit at that point.

Mo's groving on the Army which is cool by me but scary....

He gave his girlfriend an assistant to the General pin today.....

I was thinking of somthing kind of like that Greenwitch, matching blazer and skirt, not a suit but a girl-suit kind of thing, but I think I'd embarrass myself in heels. I've never been able to walk in them. I would need a much more practical shoe.


dress with matching jacket would be a nicer, dressier option than skirt/jacket for an important occasion like this

small heels (have you got a Rockport store anywhere near you? they do very nice sensible/walkable dress shoes) on a very basic pump

I hope that helps.

1 Reply
1
Reply Wed 3 Dec, 2008 11:49 am
I spent a great deal of time playing in a house band in Fayetteville during the Viet Nam years and from my experience with the military I think this would make you the most popular gal there....

Kidding. I'm thinking that you're right -- it is the less formal version of the two. Thank goodness.

Tomorrow is my shopping day. I'm preparing. I HATE to shop. AAAACCCKKK.
1 Reply