"...don’t care too much about what they do with Jews and blacks!"

Forums: Politics, Steven Cohen, Alcee Hastings, U S Elections 2008, U S Politics
Email this Topic • Print this Page
Reply Thu 25 Sep, 2008 02:29 pm
This outrageous comment is by a US congressman, not some annonymous internet troll.

And the room errupted with laughter and applause.

Thank goodness we have the high-minded, high road travelers in the Democratic Party to keep this race from sinking into demagoguery.

After telling attendees that the most important thing Jewish and African-American Democrats could do to support one another was to get Sen. Barack Obama elected president, Hastings had one more message: “For those of you like me that supported Sen. Hillary Clinton, she lost! Get over it!”


Hastings was joined on the panel by Rep. Steven Cohen of Tennessee, who is Jewish and represents a majority African-American district; Rep. Artur Davis of Alabama, who is African-American and whose district includes many of the significant sites in the 1960’s civil rights movement; and Georgetown Law Prof. Peter Edelman, who was a legislative assistant to Sen. Robert F. Kennedy.

Cohen, who recently remarked that Jesus Christ was a community organizer, took his comments about the founder of the Christian faith further Wednesday. “A lot of what Jesus talks about is wonderful,” Cohen said. “Talks about helping people and lifting them up and caring about people who are sick and all those things. He’s a great Democrat.”

The panel was part of the National Jewish Democratic Council’s annual conference. The Jewish Democratic group recently voiced criticism of Palin’s invitation to an anti-Iran rally timed to coincide with Mahmoud Ahmedinajad’s visit to New York for the United Nations General Assembly. Palin’s invitation was withdrawn by the rally’s organizers after Hillary Clinton announced that she would no longer be attending the event.

The support of Jewish voters is shaping up to be a highly sought after prize in the general election match-up between Sen. Obama and Sen. John McCain. Jews have historically favored Democrats by wide margins in recent presidential races. But, the McCain campaign is making a concerted effort to go after the loyal Democratic constituency and Obama has been plagued by false Internet rumors that he is Muslim which have had particular salience in the Jewish community. 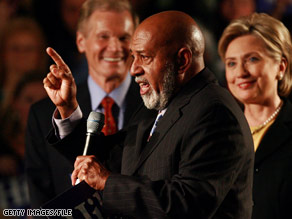 The trouble with this campaign-- both sides of the support are soooooooo extreme.

This guy isn't appealing to the middle ground voter-- Obama will be giving a statement on this. Why can't these guys just keep their mouths shut?
1 Reply
0
Reply Thu 25 Sep, 2008 03:00 pm
@Cliff Hanger,
Who is it going to enrage? What's the problem... prejudice towards moose strippers?

This was politician at a partisan meeting. Anyone upset by this needs to get a life.

3 Replies
1
Reply Thu 25 Sep, 2008 03:07 pm
@ebrown p,
I thought this might be a good place to link to this relevant video (sorry I can't find a transcript right now but Sarah says she will blame an Obama loss "on the Jews").

Tell me that ain't funny.

The obvious implication is that jews and blacks need to fear Palin because as VP she will look the other way when "they" (bigots and racists) do bad things to jews and blacks.

"I got news for you white Christians who are thinking about voting for Obama, someone who had a spiritual advisor like Rev Wright is not someone who will care whether or not your children are sexually exploited."

But then anyone who might have a problem with such a comment made by a Rep congressman at a partisan gathering should just get a life. Right?
0 Replies
-2
Reply Thu 25 Sep, 2008 05:21 pm
@ebrown p,
Sorry sir.
I read all the responses here in this forum not exculding you.
May i ask one simple question.?
If yes this is my q.
Had you been to the corrup cast-ridden cultureless India where almost all religious humans were honoured in election.( Bahai religion is not that famous as other minority religion . And most of those minarity enjoy their poverty to the full brim with their family and friends)
How come your country has not paid any attention to learn democracy ?
Why the hell this religious, sexy, topic gets the top attention while some of the real americans are seeking a soup kitchen and sleeping under the bridge without any warm clothing but only with cardboard packing materials.

I live in Germany and an athiest ,communist. by communist i mean a jew his name is karl marx and not to do with the rubbish sort you had experienced in your life..
Normally i used to respond with befitting cut and paste.
Now I had typed this without any links for which i repent.
Rama
1 Reply
-2
Reply Thu 25 Sep, 2008 05:25 pm
@Ramafuchs,
Moreover sir.
Time some times mirrors something that none of the readers understand.
I had stopped my subscription but i read thro Internet.
0 Replies
2
Reply Fri 26 Sep, 2008 05:36 am
@ebrown p,
Quote:

Who is it going to enrage? What's the problem... prejudice towards moose strippers?

This was politician at a partisan meeting. Anyone upset by this needs to get a life.


Needs to get a life? Surely you can do better than some flip, cliche phrase. As for the moose strippers comment, again, you are evading the point of the post.

I've seen a similar and funnier version of Sarah Silverman's shtick in the past-- ebrown, she's a comedienne, not an elected official.
0 Replies
1
Reply Fri 26 Sep, 2008 06:31 am
ebrown, I am a little surprised at you.

This comment is way over the line but hardly endorsed by Obama I am guessing. Disgusting all the same though. Prejudice in all forms is something we obviously need to work on.
0 Replies
2
Reply Fri 26 Sep, 2008 08:47 am
Totally whack comment.
"Watch how Palin treats moose, that is an obvious indication of how she'll deal with blacks and jews." It's as though there has been an equivalence drawn between blacks, jews and moose.
It's like saying the guy at work who is always cranky and moody beats his kids, because, hey, look how he treats his colleagues.

Some people just need to know that becasue a thought is running through their little head, they don't need to let it out in public.

I regret the comments I made last Tuesday that were not smart and certainly not relevant to hunters or sportsmen...The point I made, and will continue to make, is that the policies and priorities of a McCain-Palin administration would be anathema to most African Americans and Jews...I regret that I was not clearer and apologize to Governor Palin, my host where I was speaking, and those who my comments may have offended.

I guess he needs to get a life, right e-brown?

I wonder if his fellow Democrats at the event regret they laughed and applauded heartily at the offensive comments?