What happens when the payoffs stop?

In this article, it is said that we are basically paying people off to fight al-quaeda who would otherwise probably be either actively working against us or killing each other in their own civil war. So what do you think those people who we've been paying to fight al-quaeda will do when we stop paying them and leave Iraq? Or will we just have to keep paying them indefinitely? And if that is the case, then how on earth will we ever extricate ourselves from this mess? Is it a good strategy to bribe our enemies, or is this just a way to create the appearance of progress for short-term political gain?

Never a good idea....
0 Replies
1
Reply Fri 21 Mar, 2008 10:50 am
It is wrong to put temptation in the path of any nation,
For fear they should succumb and go astray;
So when you are requested to pay up or be molested,
You will find it better policy to say: --
"We never pay any-one Dane-geld,
No matter how trifling the cost;
For the end of that game is oppression and shame,
And the nation that pays it is lost!"

- Shakespeare
0 Replies
1
Reply Fri 21 Mar, 2008 10:59 am
It has always bit us in the butt. Bin Laden is a prime example.
0 Replies
1
Reply Fri 21 Mar, 2008 11:09 am
The idea is to round up the men of fighting age, give them a paycheck so they will not be so angry, and give them something at least minimally productive to do. The economy hardly exists, you don't want young men sitting around with nothing to do pissed off because can't support their families.

It is not a long term solution, the goal is to give the Iraq government a chance to get their act together, which has not happened. Ideally, there will at some point be jobs to move into.
0 Replies
1
Reply Fri 21 Mar, 2008 11:19 am
my guess is that eventually some "mini" dictator (or dictatorial government) will be established in iraq to bring some semblance of order back - but it will probably take 10-20-30 years , no one really knows .

looking at the surounding countries , they are more or less all dictatorships :
iran , saudi-arabia , syria , egypt ... ... so i can't see how iraq can be turned into a democracy in the foreseeable future .
hbg
0 Replies
1
Reply Fri 21 Mar, 2008 11:27 am
kickycan wrote:

What do you think will happen when we stop the payoffs?

It depends on what the other facts on the ground are. Without some political movement the benefits might be temporary. This is important for breathing room but long term success might require:

- Passage of a fair oil revenue sharing law
- Muqtada al-Sadr's holding power and maintaining a cease fire (he is losing power due to it, which might compel him to resume calls for an attack).
- Solidification of the armed forces of Iraq, and the police forces of Iraq (as much for the employment stability as the security they should be able to provide).
- More fairness from the government toward Sunnis (this would also result in more help from neighbors like Saudi Arabia).

Or should we just keep paying them off indefinitely?

We broke it and have the moral obligation to fix it. The second worst decision made about Iraq by the Bush administration's core (against the State department's objections) was to disband the Iraqi military and police units.

The challenge since then has been to create new such entities that aren't corrupt, incompetent, or the ones actually doing the murdering.

This strategy has worked well because some people have gotten sick of the violence and instability in their local community and decided to do something about it. Arming them and supporting them has been one of the biggest things (other than Muqtada al-Sadr's cease fire) that has reduced violence and without a reduction in violence almost no progress on any front is possible.

This is a bit more nuanced than Danegeld. The notion that these people would be fighting against US objectives is not entirely true. It's certainly not directly akin to Denegeld (which would be more like paying the foreign insurgents to a cease fire than paying Iraqis to turn on them).

In some cases, this is like citizens who created a neighborhood watch program but were decidedly out-armed. The decision was made to arm them and enable them to continue. This is beneficial in terms of the security that only this kind of outfit can provide (lack of local knowledge severely limits the U.S. forces' ability to combat the urban militias effectively) as well as the employment and economic stability that Iraq needs as much as it needs physical security.

This is not tribute to an enemy. It's impromptu local police employment paid to people whose motivation to drive out the foreign insurgents that have destabilized their communities has resulted in much more success than the official police forces being built.

This kind of thing can help buy time for more permanent solutions. It's not a long-term solution but it's also no Danegeld.
0 Replies
1
Reply Fri 21 Mar, 2008 11:30 am
hamburger,

do you believe the people of Iraq to be, due to the shared genetic characteristics of Middle Eastern peoples, mentally incapable of understanding how to function in a democratic government?

what exactly do you mean?

why, just because their neighbors suffer under dictatorships, do you consider a dictatorship in Iraq as a foregone conclusion?

my guess is that eventually some "mini" dictator (or dictatorial government) will be established in iraq to bring some semblance of order back - but it will probably take 10-20-30 years , no one really knows .

looking at the surounding countries , they are more or less all dictatorships :
iran , saudi-arabia , syria , egypt ... ... so i can't see how iraq can be turned into a democracy in the foreseeable future .
hbg

There is order, the us army is the police, also the government because the Iraq government hardly can be said to exist. What does not exist are Iraqi leaders, Saddam had no use for leaders thus he tried to make sure that none ever developed. The ones that developed anyways he had killed.
0 Replies
1
Reply Fri 21 Mar, 2008 12:08 pm
from what i read there are plenty of tribal leaders vying for power .
i imagine that eventually power will come from these tribal leaders . after some more bloodshed , someone will eventually be supported by some of the other tribal leaders and asssume some leadership rule - but it'll probably take 10-20-30 years (that's what american intelligence operatives on the grond in iraq are suggesting ) .
no sense looking for quick solutions imo - they likely would be unsuccesfull.
hbg
0 Replies
1
Reply Fri 21 Mar, 2008 12:29 pm
Yeah, don't try to make a difference.

Just let the country go back to a 'Saddam type' dictatorship, so that we can then say 'see I told you so. Going into Iraq was useless'.

Great strategy , hamburger. Are you on the Clinton foreign policy team, or the Obama foreign policy team? (two sides , one worthless coin)
0 Replies
1
Reply Fri 21 Mar, 2008 12:46 pm
real life seems to have a much better insight into what might happen in iraq than those on the ground in iraq . they are probably all blinded by the brilliant progress made .
btw have you found any democracies in the middle-east that can be used as an example for iraq to adopt - would saudi-arabia be a suitable example ?

perhaps vice president cheney is discussing such scenario with king abdullah while visiting in saudi-arabia right now .
my mistake : he is there to ask for increased oil pruduction . 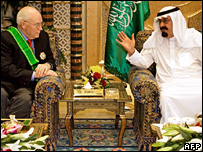