Quick! What do I do with this buffalo meat?

Forums: Food And Drink, Cooking, Cooking Meat, Buffalo Meat
Email this Topic • Print this Page
Reply Tue 18 Mar, 2008 05:22 pm
Everyone around here, including me, was nagging me to make something different for dinner so when I was at the store I bought some ground buffalo.

I've eaten buffalo before -- when I was in Yellowstone Park being stared at by buffalo -- and at that weird buffalo restaurant in Oklahoma (is that still there?) but cooking it? I haven't a clue.

Do I just make it like a hamburger or is there something better I should do?

I've got about two hours before I have to cook it so I need something quick.

Is there any advantage with buffalo over cow or does it just empty my bank account a little quicker?
0 Replies
1
Reply Tue 18 Mar, 2008 06:02 pm
Its leaner by quite a bit, and I think it tastes better than anything but hand raised angus. The meat is similar, but you will notice a bit of difference.

Most lean meat, kangaroo, emu, is better rare or medim rare at best.

I had buff steaks in a tiny little restaurant here in town years ago, best steak I have ever ever eaten, so tender.... like butter.
0 Replies
1
Reply Tue 18 Mar, 2008 06:15 pm
This site seems to confirm my opinion

Always remember that, averaging all cuts, buffalo has 76% less fat than beef. The lower fat content in buffalo means that the meat will cook faster so it is especially important not to overcook your buffalo. With that in mind and following some very simple guidelines, you can use buffalo in any of your favorite meat recipes. The most important rule of thumb to remember: cook with lower heat and use moisture retaining techniques. Searing buffalo meat on both sides helps to seal in natural juices. When cooking steaks and burgers, anticipate that the meat will be ready a little faster than beef to the same degree of doneness.

What the f/ is buffalo meat doing in Australia? 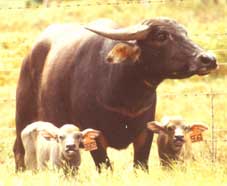 There is a great demand for Buffalo milk in Australia. There is a demand for milking buffalo in Australia and overseas. A group of Victorian Buffalo Breeders is pooling their resources to upgrade their stock to quality milking stock. Our aim is to do this by purchasing Riverine Bulls with at least 50% Italian Blood Lines, artificial insemination from pure Italian Riverine as well as investigating the feasibility of importing semen and embryos from Bulgarian Murrah Buffalo. Reports suggest that the Murrah Buffalo are the premium milking buffalo, producing up to 30 litres of milk a day.

So I could do kind of a meatloafy thing with it?

I just mixed it up in a meatloafy type thing with some regular ground beef and some other stuff. It was ground buffalo so steaks weren't an option.

Don't mess it up with other ingredients. Buffalo meat is really best straight up as a steak or burger. It's quite lean so a quick sear to retain moisture is needed.

I use buffalo meat instead of beef ... for steaks, roulades, goulash ... Needs nearly no salt - but is .... yummy ... tasty by its own.
0 Replies
1
Reply Wed 19 Mar, 2008 06:17 am
weve got BISON, not really buffalo. Its quite lean and can be used , in a pinch, to repair soles of deck shoes.
I never cultivated a liking for it though Ive eaten it to be social on a number of occasions that involved alcohol. The things I remember most

1dry
2chewy
3taste not really memorable
4really tough rare, and very tough well done
5used as a stew meat for a chunky chili, it does shine in this. (Course even rat tastes good in chili)

CAnt help much more than that. Never eat bison road lkill. Its probably turned and you wont know it till you have to call 911.

We have a lot of farms raising the behemoths for meat. EVery so often some farmer gets run over by the damn things. They are so dumb that they have no idea that we break easily.

I considered raising bison once (for about 10 minutes) then I saw the breeders fences and they were all busted up including the hot wires. Bison are remnants of the Pleistoicene megafauna that should have gone extinct for several reasons

A. The bison was a bad idea to start with

B. They had gone on quite long enough in earth history