Ok, you can pick 10 paintings past or contemporary -which???

a landscape by ivan eyre

anything by the group of seven, especially jackson or harris 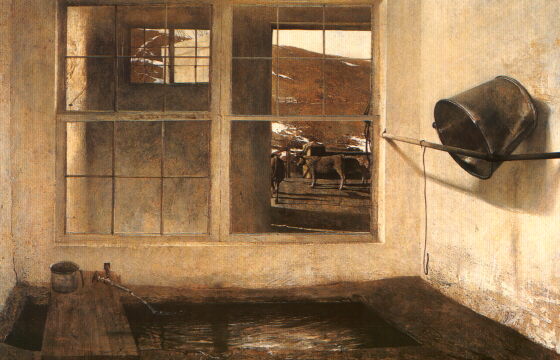 I saw Bruegels at the Doria Pamphilj in Rome (sucking in breath, wishing to go back).

On the showcasing that happens in museums, and the promo extravaganzas that happen more and more, what can I say.
I can probably not afford to travel any more. But, when I did, I liked quiet galleries, and I liked art in situ... say, a cimabue crucifix in a very old and dark church.

I liked going to the Met in NY and the Chicago Art Institute, relatively recently. I spent three days in the Met - it was the point of my trip in '04.

But -- I'm sure the major museums are well involved in promo-ville.
I've mixed feelings about all that.
0 Replies
1
Reply Wed 25 Oct, 2006 01:42 am
oh, I'm glad this thread has been revived and with some really interesting works

I think the problems with a lot of painting seen in repro or on line is the loss of subtlety and impact - when you see the real thing it can either be a major disappointment (some Picasso's are like that for me ... sorry jln!) and others are mind blowing when seen in reality like Caravaggio, Rothko, Rembrandt, Prentice, Kurt Jackson, late Braques, Sargeant ...
0 Replies
1
Reply Wed 25 Oct, 2006 05:01 am
Oh my!

I don't have time now, but I'll be thinking throughout the day and come back later.
0 Replies
1
Reply Wed 25 Oct, 2006 04:09 pm
Vivien, I agree that Picasso has dropped many bombs (at least as far as I'm concerned), but when he's right, he is profoundly right. I saw some of his large paintings in Lucerne at the Rosengarat Collection. I was bowled over (also by their collection of small Klee watercolors). It seems to me that Picasso's success follows from his willingness to take chances. He is so uninhibited, willing to spin out some horrors to generate profoundly moving and aesthetically interesting works. Imagine having that freedom!
0 Replies
1
Reply Thu 26 Oct, 2006 09:10 am
oh I'd agree that he had an original and curious mind and experimented endlessly - also that he had a great talent. I just don't always like what he did with it!

What I don't like is artists who develop a 'style' and stick with it for ever and never explore, experiment and develop.

I went to a talk by one of these recently, His work is really competent but because it sells he sticks to the same way of working. We asked if he was never tempted to work more loosely (the general feeling -unspoken - was that his work was too tight, too rigidly controlled) and he said he'd tried but it didn't sell, so he didn't do it.


........ again and again and again
0 Replies
1
Reply Thu 26 Oct, 2006 04:09 pm
I deeply appreciate your points, Vivien. There are artists whose work, while amazingly competent, ring no aesthetic bells for me. It's not their fault; it's the way my soul is built. Picasso did go through many "styles", but he definetly had a single voice (as did Matisse, deKooning, Chagall, Van Gogh, etc. etc.). But painters like Lichtenstein and Haring seem to be painting the same picture over and over again. Speaking in a single voice is, I think, very different from being stuck in a style.

It may sound excessively idealistic of me, but the painter who wouldn't "loosen up" because when he did the work didn't sell is no artist in the grand sense of the term. He's a commercial image maker.
0 Replies
0
Reply Fri 27 Oct, 2006 01:32 pm
JLNobody wrote:

But painters like Lichtenstein and Haring seem to be painting the same picture over and over again. Speaking in a single voice is, I think, very different from being stuck in a style.

It may sound excessively idealistic of me, but the painter who wouldn't "loosen up" because when he did the work didn't sell is no artist in the grand sense of the term. He's a commercial image maker.

One of the nicest things that was said to me at my degree show was by a tutor that I'd been to in adult ed pre-degree (wife of a tutor I had at uni) - she said she'd wondered if she'd recognise my work anymore but had as I still had that 'lovely flowing line' - it made my day! I'd learnt so much but 'me' was still in there.
0 Replies
0
Reply Tue 29 Jun, 2021 04:48 am
@djjd62,
the andrew wheyth i get a feeling that's a version of bathing used by people, not the cows - a shower by pail! love it
0 Replies