Forums: Legal
Email this Topic • Print this Page
Reply Thu 26 Jun, 2003 09:34 am
I'm really interested about Bush's comments on what is occuring in his homestate: 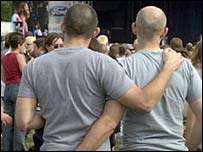 WASHINGTON - The Supreme Court struck down Texas' ban on gay sex today, ruling that the arrest of two Houston-area men having sex in their bedroom was an unconstitutional violation of privacy.

The 6-3 ruling reverses course from a ruling 17 years ago that states could punish homosexuals for what such laws historically called deviant sex.

Laws forbidding homosexual sex, once universal, now are rare. Those on the books are rarely enforced but underpin other kinds of discrimination, lawyers for the two men had argued to the court.

A Texas law against gay sex was struck down by the U.S. Supreme Court as an unconstitutional invasion of privacy.

The three are Neanderthals.
0 Replies

nobody respects an oath breaker - Discussion by gungasnake
Is taking his picture legal? - Question by aquestion
"I want to be a lawyer!" -- Frequently Asked Questions - Discussion by joefromchicago
Can a Government Official Claim Religious Exemption from Performing Official Duties? - Discussion by wandeljw
Guilty murderer Amanda Knox - Question by contrex
FOOD NAZI'S SUFFER STUNNING DEFEAT! - Discussion by hawkeye10
Hotelmanagement - Employee dates a guest - Question by lisali93
Question about going to court for a misdemeanor? - Question by Swamp Swagger
JPMorgan Chase Civil Settlement - Discussion by jcboy
Need a Legal Opinion - They Won't Let a Relative Visit From Europe - Discussion by Brandon9000
The Trial that JUST WON'T END - Question by michellesings
Copyright © 2022 MadLab, LLC :: Terms of Service :: Privacy Policy :: Page generated in 0.04 seconds on 12/07/2022 at 12:02:44
▲ ▼