Forums: Home Improvement
Email this Topic • Print this Page
Reply Fri 24 Nov, 2006 04:26 pm
I've only done the external Christmas light thing for the past few years, and am still clueless about many aspects of Christmaslightdom. I have one of those net things, a web of little lights that go over shrubs. It's maybe 9' X 3'. The middle section of one of them is dead. So about 3' X 3' in the center. I jiggled it and pushed in all the bulbs (maybe 50 of them?) but couldn't fix it.

I have some extra bulbs that seem to be exact matches for the ones that are there.

Do I toss the whole thing and buy a new one, or is it fixable? If so, how?

I'll look into buying LED replacements tho...
0 Replies
1
Reply Fri 24 Nov, 2006 04:57 pm
looking at the "canadian tire store" flyer :
100 indoor/outdoor LED lights CAN $ 16.99 - 90 % energy savings !
can you pass up such a bargain ?
head across the border quickly ! (you might be back by christmas )
hbg
0 Replies
1
Reply Fri 24 Nov, 2006 04:58 pm
On the female end of the string is a small compartment containing two fuses. You can pry the compartment open with a small screwdriver. Many light sets come with extra fuses packed in cellophane, much like the extra lights you found.

I would replace both fuses. I wouldn't hold my breath however. Most lights--such as your webbed design--will likely only give you a year or two of service before the entire thing will need to be tossed.

I remember as a kid replacing each light bulb until the set would relight. A special challenge would occur if two bulbs happened to be burned out. But that is not what's plaguing your set. Modern Christmas lights are designed to burn regardless of missing or burnt out lights. I suspect the middle portion of your string will never glow again.

This is a throw away world we live in.
0 Replies
1
Reply Fri 24 Nov, 2006 05:24 pm
The older strings {I was appointed bad bulb seeker in my youth...Uggg!!} were a true series circuit...one bulb dies, they all die. The newer ones are still wired in series, though a bit better. I still have my old 1980, handy dandy Radio Shack christmas bulb tester....still works.

The most common problem with these strings is that a bulb can burn out. Most strings come with a couple of replacement bulbs which may be enough for a few weeks of operation. But if we want to keep a string running for years, we are well advised to purchase an additional identical string simply to provide replacement bulbs.

It is interesting to note that each year the bulb bases seem to differ, and typically it is impossible to get direct replacements another year. Probably we could remove the bad bulb from its base, and re-use that base with a new bulb. But using a bulb from a different set often has sad consequences.

These lights are designed to be wired in series, and so drop the 120V line voltage to typically 2.4V (120V/50bulbs=2.4V/bulb) without using an expensive transformer. As a result, any single bulb failure could darken an entire circuit. To avoid this, each bulb has a "shunt" of several turns of tiny wire inside the bulb near the bead. The shunt is intended to conduct current when the filament fails, but the shunts often do not work.

When a shunt does operate, it takes on a low resistance. As a result, each bulb in the rest of that circuit takes slightly more voltage, gets slightly brighter, and lasts less long. So it is important to replace bad lights promptly.

I have a bunch of regular strings -- not webs -- of similar lights. I just plugged one into the end of the faulty web and then went back and covered the area. <shrug>

Looks fine -- it's on a big bushy boxwood and covers the cords pretty well. The grid isn't as nice and even as the rest of the webbing if you look closely, but the general "twinkly sparkly hedge WITHOUT a black spot" effect is maintained at zero extra cost and very little extra effort.
0 Replies
1
Reply Mon 27 Nov, 2006 05:47 pm
"...at zero extra cost ...'

let's hear it for thrifty soz !

hbg
0 Replies
1
Reply Mon 27 Nov, 2006 05:50 pm
Are those LED lights for both indoor and outdoor use? Hadn't heard of them before reading your post, Hambugie. Just Googled it and looked at a couple places but they didn't specify outdoor use.

now we are even getting fussy with the colours . what''s santa to do , accept special orders ? the old fellow is frazzled enough already

.
hbg
0 Replies
1
Reply Tue 28 Nov, 2006 11:35 am
If you're still having trouble shooting the Christmas lights, I suggest you talk to cjhsa and get a recommendation on a bigger gun!

time to take an "up-to-date" arts course . one that specialises in phsycedelic colours :wink: 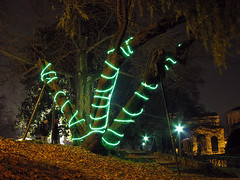