Forums: Comics, Cartoons, Comic Strips, Comic Strip, Comic
Email this Topic • Print this Page
1
Reply Tue 2 Dec, 2008 09:33 pm
@edgarblythe,
Your brothers work is good edgar. I like a strip that has your eyes busy all over, even with the margin puns.

The Yellow Kid emerged as the lead character in Hogan's Alley drawn by Richard F. Outcault, which became one of the first Sunday supplement comic strips in an American newspaper although its graphical layout had already been thoroughly established in political and other entertainment cartoons. The Yellow Kid was a bald, snaggle-toothed child with a goofy grin in a yellow nightshirt who hung around in a ghetto alley filled with equally odd characters, mostly other children. The kid wontedly spoke in a ragged, peculiar ghetto argot printed on his shirt, a device meant to lampoon advertising billboards.

Richard F Outcault's last Hogan's Alley cartoon for Truth magazine, Fourth Ward Brownies, was published on 9 February 1895 and reprinted in the New York World newspaper on the 17th of that month, beginning one of the first comic strips in an American newspaper. The character later known as the Yellow Kid had minor supporting roles in the strip's early panels. This one refers to The Brownies characters popularized in books and magazines by artist Palmer Cox.
A year and a half later Outcault was drawing the Yellow Kid for Hearst's New York Journal American in a full page colour Sunday supplement as McFadden's Row of Flats. In this 15 November 1896 Sunday panel word balloons have appeared, the action is openly violent and the drawing has become mixed and chaotic.Outcault drew four black and white, highly detailed single panel Hogan's Alley cartoons for Truth magazine in 1894 and 1895. The character which would later become the Yellow Kid had a minor supporting role in these panels. The fourth cartoon, Fourth Ward Brownies, was reprinted on 17 February 1895 in Joseph Pulitzer's New York World where Outcault worked as a technical drawing artist. The World published a new Hogan's Alley cartoon less than a month later and this was followed by the strip's first color printing on 5 May 1895.[2] Hogan's Alley gradually became a full page Sunday colour cartoon with the Yellow Kid as its lead character, which was also appearing several times a week. The strip has been described as "...a turn-of-the-century theater of the city, in which class and racial tensions of the new urban, consumerist environment were acted out by a mischievous group of New York City kids from the wrong side of the tracks."[3] The Yellow Kid's head was drawn wholly shaved as if having been recently ridden of lice, a common sight among children in New York's tenement ghettos at the time. His nightshirt, a hand-me-down from an older sister, was white or pale blue in the first colour strips.[4] The Yellow Kid's image was an early example of lucrative merchandizing and appeared on mass market retail objects in the greater New York City area such as "billboards, buttons, cigarette packs, cigars, cracker tins, ladies’ fans, matchbooks, postcards, chewing gum cards, toys, whiskey and many other products."

In 1896 Outcault was hired away at a much higher salary to William Randolph Hearst's New York Journal American where he drew the Yellow Kid in a new full page colour strip which was significantly violent and even vulgar compared to his first panels for Truth magazine. Pulitzer, who had retained the copyright to Hogan's Alley, hired George Luks to continue drawing the original (and now less popular) version of the strip for the World and hence the Yellow Kid appeared simultaneously in two competing papers for about a year. Outcault produced three subsequent series of Yellow Kid strips at the Journal American, each lasting no more than four months:

McFadden’s Row of Flats (18 October 1896 - 10 January 1897)
Around the World with the Yellow Kid - a strip that sent the Kid on a world tour in the manner of Nellie Bly (17 January - 30 May 1897)
A half-page strip which eventually adopted the title Ryan’s Arcade (28 September 1897 - 23 January 1898).
With the Yellow Kid's merchandizing success as an advertising icon the strip came to represent the crass commercial world it had originally lampooned and publication of both versions stopped abruptly after only three years in early 1898, as circulation wars between the rival papers dwindled. Moreover, Outcault may have lost interest in the character when he realized he couldn't retain exclusive commercial control over it. The Yellow Kid's last appearance is most often noted as 23 January 1898 in a strip about hair tonic. On 1 May 1898 the character was featured in a rather satirical cartoon called Casey Corner Kids Dime Museum but he was drawn ironically, as a bearded, balding old man wearing a green nightshirt which bore the words, Gosh I've growed old in making dis collection.

The two newspapers which ran the Yellow Kid, Pulitzer's World and Hearst's Journal American, quickly became known as the yellow kid papers. This was contracted to the yellow papers and the term yellow kid journalism was at last shortened to yellow journalism, describing the two newspapers' editorial practices of taking (sometimes even fictionalized) sensationalism and profit as priorities in journalism.

In a 1902 interview Outcault remarked, "The Yellow Kid was not an individual but a type. When I used to go about the slums on newspaper assignments I would encounter him often, wandering out of doorways or sitting down on dirty doorsteps. I always loved the Kid. He had a sweet character and a sunny disposition, and was generous to a fault. Malice, envy or selfishness were not traits of his, and he never lost his temper."

The Yellow Kid appeared now and then in Outcault's later cartoon strips, most notably Buster Brown.

next time i've got some pare cash i want to get some books reprinting nemo in slumberland, pretty cool stuff 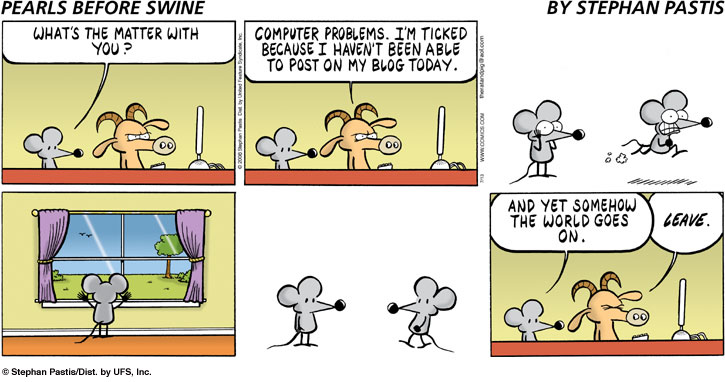 0 Replies
1
Reply Sun 1 Feb, 2009 03:53 pm
Today I came into a collection of Alley Oop comic strips, dating from the origin in the 1930s, running all the way through at least one or two artists who carried on after originator, VT Hamlin, retired from the strip. I am not sure how many volumes there are, as yet (they are gathered in binders), but it will require some new shelves to harbor them.

There is also one original daily in the hand of VT Hamlin, in a picture frame.

I feel the way one might feel on inheriting a Van Gogh.

They were passed to me by my brother, who requested that they ultimately end up in a museum. I don't know for sure what museum to contact, but he said he prefers it be a Texas museum.
2 Replies
1
Reply Sun 1 Feb, 2009 05:38 pm
@edgarblythe,
Quote:

They were passed to me by my brother, who requested that they ultimately end up in a museum. I don't know for sure what museum to contact, but he said he prefers it be a Texas museum.